There are very few types of behavior that are more disturbing to me than bullying. As a child I had my run-ins with mean girls, as most girls do, and the memories of being teased and taunted – however briefly or, for the most part, mildly – rise up whenever I hear stories about children who are mercilessly harassed – sometimes to the point of suicide – by their peers.

A new study in the journal Pediatrics finds that bullying is associated with poor physical and mental health among children, particularly among those who were bullied in the past and are being currently bullied.

The effects were strongest among children who were bullied continuously, in more than one grade, particularly in terms of psychological health, said lead author Laura Bogart, associate professor of pediatrics at Boston Children’s Hospital. Psychological measures included negative emotions such as anger and depression. – CNN.com

Michael Morones, a boy who was mercilessly harassed because he liked My Little Pony, attempted suicide at the age of 11. Eleven years old! He now lies in a vegetative state. He was bullied for years before hanging himself. 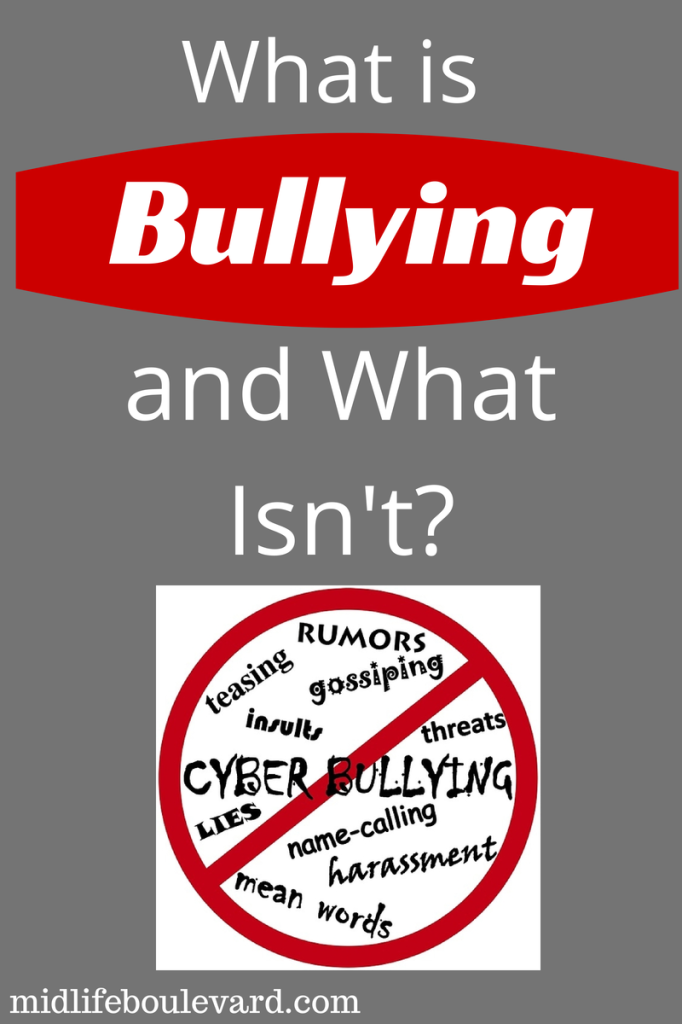 What about adult bullying?

In the workplace, these are the types of bullies adults are most likely to encounter:

Cyberbullying (click on the link for a more extensive explanation) is defined in legal glossaries as:

There are legitimate and serious cases of adult cyberbullying. People’s livelihoods and reputations are at the mercy of a destructive adversary (or adversaries) who can, with the ease and speed of a Facebook post or tweet, start rumors and spread gossip. In cyberspace it’s nearly impossible to “take back” something once it’s said. Privacy is non-existent – emails can be forwarded, phone conversations can be recorded, texts can be shared with ease.

But not all disagreements and bad relationships are examples of bullying. It’s important to keep one’s perspective when considering whether a mean comment or innuendoed (see: vaguebooking) Facebook post constitutes bullying.

The most important thing to remember about social media is that it’s public, and what you say, post, or share is a representation of who you are, especially to people who may not know you very well. Unless someone is being constantly and overtly harassed, a comment that insults or contradicts you isn’t bullying. As an adult, it’s important to keep in perspective just what impact the “mean girls” of the world have on you. Children and teens have nowhere to run if bullies are harassing them at school or even online, given their maturity level. They often feel paralyzed about what to do to escape their tormenters and embarrassed to ask for help from parents or teachers.

It’s essential and proactive for parents to be aware of their children’s and teens’ online activity and to be alert to changes in mood or behavior. Most of the time a bad day means nothing, but sometimes a bad day can be the worst day ever.

For adults – especially online – it’s easier to disconnect from people who upset us and even bully us. Block, unfriend or unfollow. If the bullying persists, there are ways to try and stop it. And if it continues, contact law enforcement. Be the adult about your situation that you would be about your child’s. Keep your activity on social media in perspective, and realize that just like in real life, not all relationships will last or be productive. Sometimes we have to let people go.

What cyberbullying is not:

If we all start crying “bully” every time someone disagrees with us publicly or hurts our feelings, the word will lose it’s meaning and impact.

I think the word bullying is overused in general – with both adults and minors. We see the word being used inappropriately or out of context in many cases today. For example, when confronted with a rude waitress, some customers will  immediately refer to her as bully. I think society has co-opted this term, which is sad, because it is actually weakening it and people are not taking it serious as they should.

There are bullies – destructive, cruel, and abusive – and then there are people who are just mean – or simply disagree with you. Knowing the difference, and knowing when to cry “bully” is essential to a successful and positive experience on social media and to keeping true and impactful the meaning of the word “bully” by using it when it’s a genuine problem.

The word already has lost its meaning because it's been expanded to include things that aren't bullying. And cyber bullying isn't even a thing. Any retard who can't hit the ignore button to silence jerks should kill themselves because they're useless.

Agreed that we should understand the fine line between disagreeing with others and harassing them into submission! I'm glad you addressed the other side of how the term is being overused!

Maybe it's time for an update on the 'Boy Who Cried Wolf' story!

Such a great post! It is a very serious problem but I agree it is so "over-used"! I know that now every kid has a smart phone and I can imagine it is so hard for parents to keep up. You see so many of these tragic occurences. When my kids where at home there was one computer in the livingroom with an egg timer. It worked so well for us because they knew we were right there and could check what they were doing if need be at anytime. It was considered an extra not a way of life. Teaching our kids to be responsible for their actions is one of a parents most impotant jobs.

Thanks for a great piece on an important subject. Both my kids were bullied at some point when each was 7 - 9. It was quite traumatic then, but luckily my kids somehow learned to avoid future bullying situations or were simply no longer targets. I wish I knew why so that I could dispense some smart advise as to how that happened. Alas, I don't, except for telling them the obvious: to stand up for themselves. My daughter is now an expert at that.

Thankfully, I don't encounter much bullying these days, but rudeness, inconsideration and disparaging and just plain bad manners... Yeah, plenty of that. So much bad behavior that can cause heartache and personal havoc.

Dear Daddy: Thanks for Believing in Me

"My father gave me the greatest gift anyone could give another person, he believed in me." - Jim Valvano This...