“You can’t do that to another girl!”

Alex was really pissed. I didn’t understand why she was pissed at me, exactly. It had been her boyfriend’s idea to walk in the summer moonlight and make out in some neighbor’s yard, not mine.

It would have remained a regrettable secret, but Alex (not her real name) either suspected something and bullied her boyfriend into a confession—or his guilty conscience compelled him to ’fess up. Either way, the details had come out: a few kisses in the dark and horizontal body contact with another girl—me.

What happened next: a torrent of full- blown, female adolescent fury aimed— justly or not— at me. “You just don’t do things like that in a house of girls!” 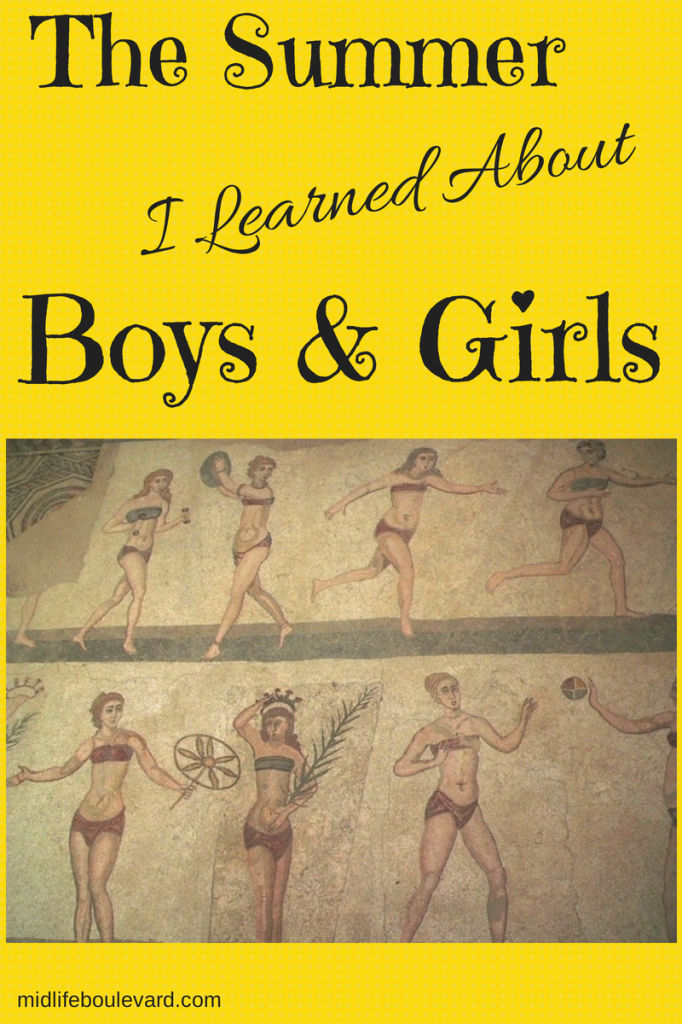 Alex had a point—we did live in a house of girls. I was sixteen in the summer of 1968, staying at my aunt and uncle’s house in a Southern California beach town. Alex, also sixteen, lived with my relatives as their unofficial foster daughter. Along with my three female cousins, that made five teenage girls living under one roof.

We girls had fallen into a lazy summer routine. As we waited for the sun to cut through the “marine layer,” we’d fuss with our hair, put on swimsuits, pack lunch. We took our time walking down to the beach—slapping our flip-flops on the sidewalk and yakking all the way.

We’d stake out a place on the sand, shed our t-shirts, and swipe on Coppertone or Sea ’n’ Ski. Walking towards the surf, we sucked in our stomachs and made sure the bottoms of our swimsuits didn’t creep up.

For me, beach life meant freedom and a world apart. I had no real responsibilities, no obligations, and got no push-back from anyone. My aunt and uncle let me do my thing. So if I acted a little wild, I knew they wouldn’t stand in my way. We didn’t have a curfew; we didn’t need to be specific about where we’d be or when we’d be back or who we hung out with.

Unless we hung out with another girl’s boyfriend.

By my actions, I had violated the unwritten code of cohabiting teenage girl behavior. The truth is, the languid rhythm of the beach town brought out a side of me that was untethered and reckless. I had my reasons for acting out: I was trying to get over a bad break-up. Why not flirt with every boy I met? I didn’t have any better ideas.

I’d been in a long-distance relationship with a boy I met at summer camp the year before. When summer ended, we sustained our romance with phone calls and bad poetry.

He came to see me at the beach, since he lived nearby. At the end of the evening, we had a nasty fight.

“Then get out of my car!” (I did). I told him I never wanted to see him or hear from him again. Ever.

He laid rubber in the driveway and drove off. Good riddance, I thought. Then I burst into tears.

My cousins threw a party a couple of nights later. Five girls attracted a lot of boys. We danced to the Beatles, the Temptations, and Marvin Gaye on the dimly-lit patio. When the slow dancing started, I looked in earnest for a partner. So many prospects: tan, blonde surfers with long hair and sexy smiles.

But the one who caught my eye? Jack (not his real name either):  a skinny kid with a mouth full of heavy metal. He had a slow smile, brown hair that hung over one eye, and long, graceful hands.  And there you have it—a love-sick girl, hoping to get her groove back, somehow drawn toward a kid still in junior high. In a house of girls, in a beach town, under the moonlight on a cool summer night, strange, unpredictable things can happen.

Jack. Me. My cousin’s room, with the door closed. Happy hearts beating fast; metallic kisses and slow hands. After about an hour of this, he reached for his fly and politely asked, “Want me to …?”

I felt happy when I was with Jack.

And when I wasn’t with him, I’d ask myself if I was nuts.

A few days later, Alex’s boyfriend and I started talking and the next thing I knew, he had me by the elbow and we were out the door.

As we walked around the neighborhood, the conversation turned to love. Or maybe it was sex. I can’t remember exactly. But he was certain he could teach me all about it. I didn’t like him that much and I didn’t really think he could teach me anything worthwhile, but again—it was summer, the moon was full, and I was in a boy’s arms and could feel his heartbeat as he pressed himself against me and slowly brought me down to the ground. Was I insane? We might have been caught in the act by a cranky neighbor or a slobbering dog

Before things really got out of hand, I pushed him away. “We should stop now and go back to the house,” I said, “before Alex notices we’re both gone.”

I had an inkling she was the jealous type and should’ve thought twice before doing anything to incur her wrath. I certainly wasn’t going to kiss and tell, and I assumed her boyfriend wasn’t an idiot.

Under duress the next day, he told Alex that we’d been out together, which was technically true: we had been “out,” and we were together. After her sorry excuse for a boyfriend slunk out of the house, Alex fired off the “house of girls” diatribe.

She shook her finger in my face. “You just don’t do those things—how could you?”

My heart rate accelerated, my face felt hot, my knees shook. That afternoon’s guacamole rose in my throat. No one had ever come at me like that. I wanted nothing more than to hightail it out of there—and escape the comeuppance I undoubtedly deserved.

And that was the end of my boy-crazy summer, when I learned some lessons about life and love—the hard way—in the house of girls.

That sure took me back in time...my BFF and I had the same crush. Boy, was that a mess. She still stings from it.

Carol--I once shared a one-bedroom apartment with a friend who was dating my ex! Talk about a mess. That one took years to get over!

Those were the days, looking back. I guess it wasn't so much fun having someone so mad at you. I just discussed the girl code with my granddaughters.

Doreen-- Thanks for spreading the word about the girl code to your granddaughters. I hope this is one lesson they won't have to learn the hard way on their own!

Ah, the lessons of love and longing. It is so hard to remember being that young but the way you write this took me right back to 16. And Sea & Ski! I can even remember that smell.

Sherri, yes the aroma of sunscreen brings back so many memories! Thanks for your comment.

The Day I Shaved My Head Because I Had Cancer

Because I started out blogging about my breast cancer experience on a site called Caringbridge, I never really shared what I went...