Have you heard of Richard Fifield yet? If not, allow me to introduce you. Richard Fifield recently released his debut novel, The Flood Girls, and everyone I know is in love with it. Pick up a copy and you will be, too. I’m sure of it. It’s an intense read, but one that draws you in and holds you tight – all the way through to the end – and even after you’re done.

Rachel is our main character. She’s returned to town to make amends. Why? We don’t know yet. We do meet Laverna, Rachel’s mother. Mom is the owner of the town bar. There is a lot of pain between them and it’s been a long time since they’ve been together or connected in any positive way. Between Rachel’s reputation and her mama’s anger you know that there’s a lot of unaddressed hurt.

Although not the primary character – Jake is the one you connect to the most. Maybe he really was the main character. I don’t know, exactly. But we fall head over heels for Jake and want to support this young boy with love beyond what our hearts can hold. Fifield has written Jake as a huge Jackie Collins fan, something I’ve since learned describes Fifield, himself. Jake uses novels and his creativity as an escape from a world that surrounds him that isn’t where he wants to be. This young man has so many dreams. So many hopes. I just love this kid and the relationship that develops between Jake and Rachel. The friendship blooms as the rest of the town takes Jake under their wings.

Jake’s mama, Krystal, seems pretty clueless. She hurts my heart time and again as she chooses her baby’s father over her oldest child. Bert’s a bit of a bastard. We’re not surprised at just how awful he is as we get to know him better. We are surprised at how Krystal just stands by him. Pretty much no matter what. We want to throttle her time and again. We do not get the opportunity to do so.

Although I didn’t have it completely pegged, I anticipated a little bit of how this novel was going to end. And because I’m an honest reviewer, I’ll tell you the truth. It made me really angry. Like, I couldn’t write my initial review of this book right away kind of angry. This doesn’t take away from the quality of the read, not by any means, but puts it up there with Gone Girl in that when I finished reading I wanted to throw the book across the room and/or out the window. Which could be considered high praise, I suppose.

Maybe I’m not quite that frustrated with this book. Or maybe I am. I can’t decide. But I liked it enough to tell you that it’s worth the read. I loved the story and the way we could see through the eyes of the characters. Because Jake may have been looking out through our author’s eyes, but the other characters certainly were not – and despite that – or because of it – the way he wrote them was phenomenal.

So grab your copy of The Flood Girls today. You’ll thank me. Or be mad at me. But that’s okay. Because that will mean you read and loved/hated the book. And you kind of need to do that.

Like this? Tweet this! [bctt tweet=”Looking for a great summer book? Read our review of The Flood Girls by Richard Fifield.” username=”midlifeblvd”] 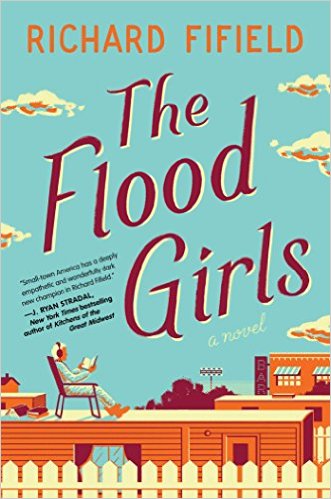 Andrea blogs over at Good Girl Gone Redneck where she shares reviews of her favorite reads fairly regularly. She also tells you what books you need to get your hands on before you even know they’re coming out – so you should sign up to see what other books she’s going to make you add to your to-read list.

Reconciling Beauty With The Midlife Beast

Since I crossed into age 50 twelve years ago I have turned time and again to four different books about...