Skip to Content
0 shares
Thank God for Nora Ephron. Before she came along, the primary role model for a smart, wise-cracking female writer was Dorothy Parker, known both her sharp wit and her unenviable life. (After too much drinking and too many bad relationships; she died a famous but unhappy woman.)Nora, thankfully, provided the witty woman writer with a much better template. You can be female and funny, and you can soar, both personally and professionally. Not without challenges, of course, but Nora showed us how to navigate those as well. When hubby Carl Bernstein betrayed her,   for instance, Ephron turned his betrayal into the best-selling Heartburn, then went on to find lasting love with writer Nicholas Pileggi. 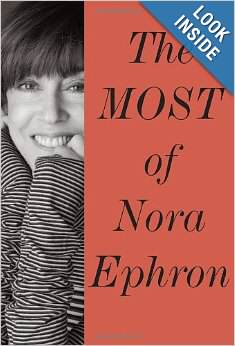 Nora, apparently, had it all.

Except, alas, a good long run. Ephron died in 2012  at just 71. Now The Most Of Nora Ephron, collects the best of her work across many genres. Essays, Articles. A novel. Both a play and a screenplay. Even blog posts!  At a whopping 576 pages, is this too much of a good thing?  Absolutely not. I just hope somebody is working on a collection of Ephron’s letters. I’d love to read those too.

Even if you‘re a long time fan like me, there will be work here that you’ve missed.  I own all of Ephron’s book, but had never read her blog. I’d also missed a lot of her early reporting about politics and journalism for venues like The New York Post and Esquire.

Will you love every page? Probably not.  I skimmed the essays about soufflés and omlettes and the perfect pastrami sandwich (nothing puts me to sleep faster than food writing). And I quickly lost interest in Lucky Guy,  her play about journalist Mike McAlary (published here for the first time). But I breezed happily through the rest, taking great pleasure in the terrific writing, and the many funny lines Ephorn is famous for:

“If pregnancy were a book they would cut the last two chapters.”

“When your children are teenagers, it’s important to have a dog so that someone in the house is happy to see you.”

I particularly enjoyed Ephron’s magazine journalism from the 1970s, especially her articles about the dawn of the Women‘s Movement, which vividly evoke the sense of possibility, solidarity and excitement (not to mention the petty infighting and rivalries) of those early days.

Ephron herself seems destined to have become a  feminist. One of four daughters of Henry and Phoebe Ephron, a successful screening-writing team (responsible for movie classics like “Desk Set”) Nora was raised both to write and to make a good living at it by an uber- successful career woman who famously advised her daughter, on her own death bed: “take notes.”

Ephron, in turn, gave this good advice to the graduating class at Wellesley, her own alma mater, in 1996:

“I hope that you choose not to be a lady. I hope you will find some ways to break the rules and make a little trouble out there. And I also hope that you will choose to make some of that trouble on behalf of women.”

The irony, of course, is that Ephron herself was (due, in part to her own Wellesley education) very much a lady. When she did rock the boat (and she achieved many ground-breaking “firsts“ in her career) she did it with wit, and without raising her voice. Feminist but also deeply feminine, Ephon was a firm believer in the classic paradigm of wedding Mr. Right,  then becoming a wife, mother and home maker. She was a best-selling writer who also prided herself on her ability to give a fabulous dinner party. (In the essay “About Having People to Dinner” she shares her dinner party secrets, including “It is absolutely essential to have a round table.”)

Ephron’s work appeals to so many because she was a feminist, but a feminist with a deep fondness for the opposite sex, who believed in romance and happy endings.  In other words, an optimist. What, after all, is the underlying message of her hit movie When Harry Met Sally? Men and women, inevitably, misunderstand each other. And lie to each other. (The evidence? That famous faked orgasm.) Clearly, making love work is an impossible challenge. So? Let’s fall in love anyway.

When I asked friends and fellow writers how they felt about Ephron, the response was 100% positive.

There were no dissenting voices. Everyone felt good about Nora.

And me? I’m just one of the many writers who aspire to hit the mark that Nora achieved. I want to be honest and smart and funny, and, at the end of my run, to be able to look back on a life well-lived. (Including stirring up some trouble on behalf of women.)

But when a disgruntled reader dismisses one of my own humorous essays with, “You‘re no Nora Ephron,” I don‘t mind.

This essay first appeared on www.womensvoicesforchange.org.