Skip to Content
241 shares
Food writer and self-proclaimed “knish scholar” Laura Silver has researched knish history, and writes of the iconic potato pie she calls “the Jewish soul food:” Knish: In Search of the Jewish Soul Food – just in time for International Knish Week, which began on May 5th. 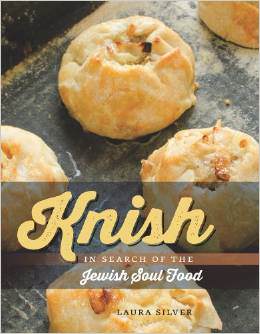 Click to buy through affiliate link.
Silver was both shocked and saddened when Mrs. Stahl’s, her favorite knish emporium, closed its doors in 2005 after 70 years of serving top notch knishes.  “I whimpered and clung to the stalk of a parking meter“ Silver writes of the moment she learned the venue had become a Subway restaurant.
This is a woman who takes her knishes seriously.
“Even for those of us who saw it coming,” she laments,” the loss of Mrs. Stahl’s was unthinkable. The absence of knishes made for a black hole within a void, within the pit of a person’s stomach.”
Fearing that her beloved “pillow of filling tucked into a skin of dough“ was becoming an endangered species, Silver devoted herself to learning as much as she could about the potato pastry that, she claims, “shaped her identify.” The result is this 300 page, generously illustrated book, covering 300 years of cultural and culinary history.
If you need to know anything about the knish, this is your book.
After describing the hundred-year-ago heyday of the New York knish, when dozens of venues like “Gabila’s” and “Ruby the Knish Man” thrived, Silver expands her quest geographically,  tracking the rise and fall of knishes and knisheries from Poland to Paris, California to Canada.
You’ll learn about every possible kind of knish. The cocktail knish. The blueberry cheese knish. The broccoli knish. The kasha knish. (Silver’s favorite.) The sweet potato knish. Even the square knish.
If it’s knish-related, Silver is on it. The first appearance of the word “knish” in the dictionary? Webster’s, 1916. The world record for competitive knish eating? Eleven knishes in eighteen minutes. What do Enrico Caruso, Teddy Roosevelt and Leon Trostsky have in common? All three were known to have eaten a knish.
Silver tracks down every time the knish has made an appearance in popular culture, from Yiddish theatre to “Welcome Back Kotter.“ Knishes in poetry. Knishes in popular song. (Including rap.) The knish in literature. (Isaac Bachevis Singer and Susan Isaacs both used them as a plot device.) The knish on Broadway. Knishes,  according to Silver, have appeared on television countless times. (My favorite example? A Muppet character called “Sid Knishes.”)
She covers a folk trio called “Love and Knishes.” And uncovers a connection between the knish and Eleanor Roosevelt. She shares a document called “The Ten Knish Commandments,” written in the 1920s, and profiles a group of contemporary Minnesota do-gooders who raise money selling home-made knishes.
Silver also reveals the fact that “knish” is Yiddish slang for the word “vagina.” (Who knew?)
Mixed into the history of the knish is Silver’s personal and family history, and an exploration of her own emotional attachment to the pastry.
Although it contains footnotes, and is published by a university press, “Knish” is anything but a scholarly tome. Rather, it’s a rambling “knish-mash” of tall tales, family lore, researched history, anecdotes,  meditation and reminiscence, held together more with love than logic.
There’s also a definitive knish recipe, as well as a useful list of “Where to Get A Good Knish.” (Best restaurant name? New York’s Knish Nosh.)
Silver, who writes about food for both the New York Times and Forward, has become a one woman juggernaut of knish appreciation. Her goal? To “lay the foundation for a global knish renaissance.“ In addition to researching and writing this book,  she both lectures about the knish and maintains a knish appreciation website (www.knishme.com) to keep other knish aficionados up-to-date.
One development Silver is tracking? There’s a movement afoot to re-open Mrs Stahls, including a Facebook page (“Bring Back Mrs. Stahls”) that has close to 2,000 Likes.
“Knish,“ if you partake, will work its magic on both your taste buds and your heartstrings.  And if you’re Jewish, it’s sure to bring back memories.  “Proust had his madeleine,” Silver writes. “Jewish New Yorkers had their knishes.”  Although a Detroit Jew myself (now living in suburban Philadelphia) I found myself back in Grandma Sadie‘s kitchen, a magical realm of delicious stuffed cabbage, out-of-this-world blintzes and, of course,  mouth-watering knishes.
I hadn’t eaten a knish in years. The week I read this book, I had two. One potato. One spinach. Both delicious.
Let the knish renaissance begin!
This review first appeared on www.womensvoicesforchange.org.