At menopause, many of us are looking for hot flash relief. Laurie of Looking on the Sunnyside tried Black Cohosh – here is her report.

“Is it hot in here, or is it just me? ”If you are peri-menopausal or in menopause, you have probably asked that question at one time or another.  Living with hot flashes can be annoying to say the least, so rather than just suffer I decided to learn more about them and see if I could find a way to reduce or eliminate these ‘unplanned trips to the tropics’.

For starters, lets talk about hot flashes. If you are young enough or lucky enough to have never experienced one, having a hot flash feels like your skin has been set on fire, not the burning pain of a fire, but the intense heat of standing right next to the flame.  The heat consumes your whole body and instantly you become a colossal sweat-producing factory.  Hot flashes can happen at almost any time – and they usually happen at the most inconvenient times.  For some woman, certain foods or activities will trigger a hot flash, but they can occur regardless of where you are and what you are doing. Many of us also have frequent hot flashes during the night while we sleep, otherwise known as ‘night sweats’.  I have literally woken up to find that my sheets are wet and now that the hot flash is gone, I have to find the covers that I just threw violently off the bed, because I am now freezing. 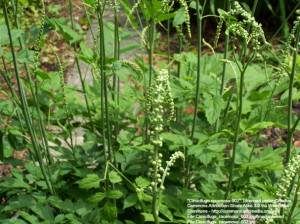 Even though hot flashes are the number one complaint of peri-menopausal and menopausal woman, doctors don’t fully understand how and why the body does this. We do know its related to changes in your hormones, specifically the change in estrogen levels. If you have hot flashes and night sweats, you know the inescapable and never ending source of frustration that has become your life.  Hot flashes strike without warning and they seem to have a fantastic accuracy for happening when they are least desired.

At a recent doctor visit, I mentioned my challenge of hot flashes to my doctor. After some discussion about how often they were occurring. We discussed my reluctance to take hormones (I had tried some a few years back for some bleeding issues and hated the way they made me feel, not to mention the bazillion possible side effects) so she suggested that I try black cohosh. She was open and honest with me, telling me that the research is limited and the results are mixed, but many women find relief using it. I bought a bottle of a supplement with black cohosh and after reading the directions for the dosage, I decided to give it a try. After all, what did I have to lose and if it worked – Yahoo!

After arriving home, I opened up my laptop and began looking up more about black cohosh. I was encouraged to find out that out of over 123 reviews on Web MD, it received 4 out of 5 stars in reviews – clearly it was working for some folks.

Black Cohosh is actually part of the buttercup family, which sounds much nicer than black snake root – another name for black cohosh used by some native groups. It is also known as Bugbane – which makes me think of Hermione in potions class, wondering if Harry Potter gave some Bugbane to Professor Mcgonagall for her hot flashes.

As my doctor had mentioned, there were some studies with mixed results, and there was very limited research into long-term effects, but I was very encouraged to learn that it has been used in Europe since the 1950’s.   The German government has approved Black Cohosh as an alternative to hormone therapy. While any drug or supplement can have side effects, the most commonly mentioned were occasional stomach discomfort and in rare cases possible effects to your liver. The Mayo clinic’s website reported that use of Black Cohosh is “generally safe up to one year”, although they did advise individuals to use it cautiously in anyone with a history of hormone sensitive conditions (breast cancer, uterine cancer, etc.)

I have been taking my black cohosh twice a day for two weeks and I have noticed a significant reduction in my hot flashes. Prior to the black cohosh, a glass of red wine was sure to trigger at least one hot flash and some night sweats, but I am thrilled to say that I am drinking a glass of wine while writing this post and I am feeling cool as a cucumber. I don’t know if it really will work long term, but if it helps at all I will be grateful.

Laurie WJN is a self-described writer, dreamer and child at heart. Her unique insights on emotions and behavior come from her many roles as a wife, mother, sister and former recreational therapist and middle school teacher. Laurie wrote her first book in 2001. Laurie lives in Arizona with her incomparable husband and three unruly dogs. You can buy Laurie's book, The Misadventures of Me and My Uterus, on Amazon.

Laurie WJN is a self-described writer, dreamer and child at heart. Her unique insights on emotions and behavior come from her many roles as a wife, mother, sister and former recreational therapist and middle school teacher. Laurie wrote her first book in 2001. Laurie lives in Arizona with her incomparable husband and three unruly dogs. You can buy Laurie's book, The Misadventures of Me and My Uterus, on Amazon.

I've been taking Black Cohosh for a couple of years and it definitely works. I did have a break in there where I ran out and they came back so I know I still need it.