“I’m breaking up with my boyfriend because he refuses to let my Bichon share the bed with us when he sleeps over. I’ve had Maggie for ten years, but have been with him for just a year. I told him that she was here long before he was!”

A Bichon Frise is a small white dog, poodle-sized, but fluffier. Fans of the breed love our “fluffs” for their bright, engaging natures and their extreme cuteness. But our attachment to these dogs can present challenges. One Bichon owner recently posted that lament on a Bichon-related Facebook group.

“There’s an interesting dilemma,” I thought, anticipating that her post would spark a lively online debate. 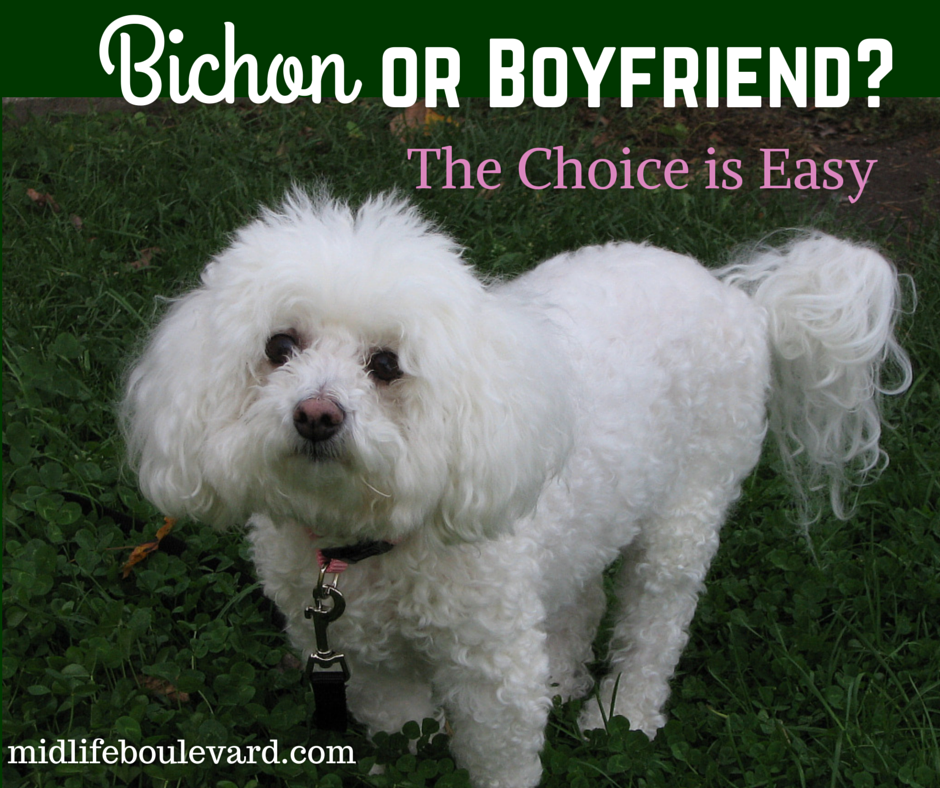 I was dead wrong. Within a day, she’d received 400 comments, every one of them supportive. The clear consensus among the Bichon crowd? A boyfriend who wouldn’t bed down with a Bichon should be kicked to the curb. The posted comments expressed this sentiment in a variety of ways:

A CHOICE BETWEEN A BOYFRIEND AND A BICHON?  YOU CALL THAT A CHOICE?

“I’d have done the same thing. Love my dog or there’s the door.”

“His loss, your gain. More room in the bed for you and Maggie!”

“Bichons before boys, I always say.”

“What is he — nuts? NOBODY gets between a girl and her Bichon.”

Kick him out. But tell Maggie to wee in his shoes first.

“Well look who ended up in the dog house… Adios, boyfriend!”

A DUDE WHO DISLIKES DOGS? BE VERY SUSPICIOUS.

“You can tell a lot about a man by the way he treats your dog.”

“A guy who starts with a demand like that will soon escalate to more if you give in. He needs to know that YOU take commitments seriously — starting with Maggie.”

“If he doesn’t treat Maggie well, he probably won’t treat you well either.”

ALWAYS CHOOSE YOUR DOG OVER A MAN. YOU WON’T EVER REGRET YOUR DECISION

“Bichons are smarter than most men anyway. And far less aggravation.”

“The more I know about men, the more I love my Bichon.”

“No man will ever be as honest as your dog, or as loyal, or as caring. He might claim that he’ll be there for you. But you KNOW that Maggie will.”

“You don’t need a man in your life to make you happy. You need just two things. Yourself… and your dog.”

MR RIGHT WILL LOVE BOTH YOU AND YOUR DOG

“You’ll find somebody nicer who will love Maggie too.”

“Peaches and I are a package. End of story.”

“The right guy will delight in a Bichon being part of your bedtime routine.”

YOU’RE NOT THE FIRST BICHON OWNER TO MAKE THIS CALL

“I made the same decision with my ex. He said choose… and I did! Lilo has shared my bed since she was a puppy. Eight years and counting.”

“When my husband proposed, I told him that my dogs, who had shared my bed long before he did, would continue to do so. And if he hadn’t been okay with that? I wouldn’t have married him.”

“I made the same call a decade ago. Best decision I ever made, because I met and married a man who loves both me and my dogs.”

A BICHON ON THE BED? ALWAYS A PLUS

“Mine cuddles with me every night and I wouldn’t trade that for the world.”

“I can’t sleep without Buttons.”

“My hubby doesn’t like sleeping with our dog on the bed either. When he complains I tell him to go sleep in another room. We just celebrated our 25th anniversary.”

“Betsy is the best contraceptive I’ve ever used.”

YOU CANT SHARE YOUR BED WITH TOO MANY BICHONS

“No fluff in the bed? Is he insane? I sleep with four cuddly Bichons and I love it.”

“Good for you. We sleep with six.”

“All five of ours sleep with us.”

“My husband and I sleep with three. We don’t accept people in our life who don’t love our furkids.”

“We share our bed with six Bichons and my hubby loves it.  Real men love Bichons!”

“We currently have nine in our bed. (Four adults and five puppies.)”

EVEN FOLKS WHO DON’T BED DOWN WITH THEIR BICHONS APPLAUDED THIS DECISION:

“Who needs a man who is jealous of a dog?”

“He wants to come into your home and tell you what to do? I don’t think so.”

“My Bichon doesn’t sleep in my bed but having said that — I wouldn’t let someone else tell me where my Zoey gets to sleep.”

THE BICHON-ON-THE-BED TEST, IN FACT,  IS AN EXCELLENT WAY TO SCREEN OUT MR. WRONG

“Anyone who doesn’t embrace my Tippy doesn’t have a chance with me.”

“If he really loves you, putting up with your dog sleeping on the bed is a small price to pay.”

“You go girl!! I’m on my own at 51 because unless I met someone who accepted my fluff Sheldon (and no one has) then they are NOT for me! I would rather have my dog by my side than a guy like that ANY DAY!!”

A FEW FINAL WORDS OF ADVICE:

“Get another Bichon to get over him.”

“Better yet — go to the dog park and find a man who loves dogs.”

“Thinking of dating a Bichon owner? Great idea. But never underestimate our love of or loyalty to the dog on the bed.”

15 Things I Learned In My Fifties

They say hindsight is 20/20. I am gaining perspective on the decade I exited a few months hence. In some...