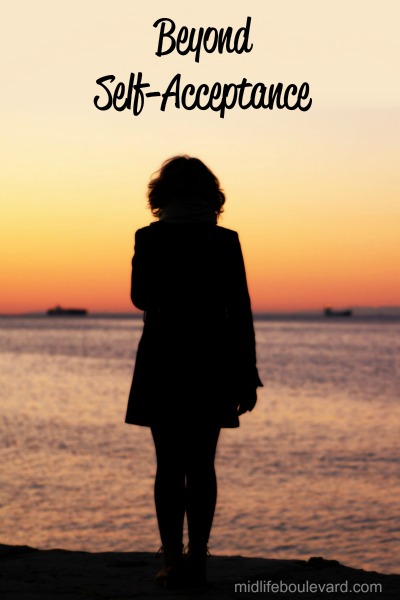 Self-acceptance is an interesting journey. It takes time. Sometimes it surprises you.

Like when you reach 52 years and you think you’ve lived long enough to never have another zit. Then, you wake up with a huge zit on your forehead. It happens. Believe me.

I was a normal as the next teenager kind of teenager. If the “next” teenager was a little odd. I had typical reactions to embarrassing facial eruptions. I railed against them. I declared my life over. In my defense, on one occasion, I got a huge zit the morning of prom. I think can justify my histrionics that day.

Now? A big zit on my forehead is just a big zit. Who cares? Slap some concealer on that baby and welcome it to the family. I wouldn’t choose to have a zit, but if one appears, I have no problem with acceptance.

I have been working toward self-acceptance. A thought occurred to me that when I am self-accepting, I view my self-acceptance much as I view a zit on my forehead. I might as well be cool with it and live anyway.

We can’t just settle for self-acceptance. We must defend ourselves.

We have to jump in with both feet and release our inner momma bear that comes out when something or someone threatens a person we love. We have to release that inner momma bear for our own damn selves. Especially, during those times when we are our own biggest threat.

How can we become who we are supposed to be if we aren’t dedicated to defending ourselves?

We counsel the child about his booger eating ways. We let him know that one more tantrum means a long expanse of time with no video games. These behaviors in no way impact our willingness and need to defend that child. Even though the child has room for improvement.

But that doesn’t mean that we shouldn’t wholeheartedly defend ourselves.

I suffer from depression and anxiety. An ongoing medication issue has caused my anxiety to be particularly bad for the past few months.

I realize that last sentence undersells how I feel. I have been in a near constant state of fight or flight. I want to punch something that I can’t see and want to run from something that isn’t chasing me.

I am sending my brain danger signals and my brain behaves as designed. Fight or flight.

I find when I tell myself “I will defend you” that my anxiety dies down. Maybe just for a few minutes, but sometimes that is all I need.

I get a handle on the fact that my job sometimes sucks and is stressful, that our last child is nearly grown and that my husband and I are aging.

I found her battle cry of “TOWANDA!” amusing. Cute even .

I was a young woman when I first saw that woman. I am entrenched in midlife now and I am finding the battle cry necessary. What that battle cry says to me is “You are fine. You can relax. I am here to defend you and trust me when I tell you, I am good at defending you”.

No one is better at defending loved ones than I am. The concept of defending myself wasn’t one I had even considered and it is so simple, really.

We must accept ourselves. Self acceptance is important. We won’t defend something we don’t accept.

When we defend ourselves, then we are safe. We carry our protector with us.

I will always take care of me. I will defend myself.

Michelle Poston Combs can be found at her blog, Rubber Shoes In Hell. Her work can also be found on The Huffington Post, Scary Mommy, Blunt Moms, The Mid, Mock Moms and Better After 50. She had an essay in Jen Mann's latest anthology, I Still Just Want To Pee Alone. She is also in the 2015 Indianapolis cast of Listen To Your Mother.

Michelle Poston Combs can be found at her blog, Rubber Shoes In Hell. Her work can also be found on The Huffington Post, Scary Mommy, Blunt Moms, The Mid, Mock Moms and Better After 50. She had an essay in Jen Mann's latest anthology, I Still Just Want To Pee Alone. She is also in the 2015 Indianapolis cast of Listen To Your Mother.

Depression and anxiety are great starters of hate talk about ourselves. They are like 2 crows on either shoulder just trying to push you either into traffic, holding you back from moving, or just yakking so loudly you can't think. I say, EAT CROW or I do like TOWANDA!

So true! If we spoke to our friends the way we speak to and about ourselves many of us would be friendless! TOWANDA!

I love your funny posts, but I love this warrior voice even more. I know there aren't words to describe how awful ever-present anxiety can feel. I've certainly never found the trick to turning it off, even when I know it's caused by something external to myself. Maybe moving from "accepting" to "defending" is the way to go. When life gives you lemons, demand to see life's manager!

Thank you so much! And it's a process, you know? It's not perfect, but I do feel a little relief when I feel like I'm defending myself.

Thank you, sister! So happy to see you here. :)

I love this post. It resonates with me so much. Yesterday, at therapy, we talked about how I need to understand and accept my needs. Even if they weren't met as a child, it doesn't mean they don't matter. I have to defend my birthright of having needs!

I am so glad you liked it! Thank you for reading. And yes..we do have needs...we're human..just like the humans we take care of and defend. We have to put ourselves in that circle of protection.

When I ditched my corporate life to be a freelance writer (and then a stay-at-home mom/homeschooler), I expected some trade-offs....