Please note that some links are affiliate links. If you click through and make a purchase, we receive a small percentage that helps keep us in business. Thank you for supporting Midlife Boulevard.

I have a terrific photo from a few years ago where my now son-in-law and my daughter and my soon-to-be daughter-in-law and my son are holding up their Hanukkah gifts. One couple had just unwrapped a Boxee; the other was the proud new owner of a Sling box. 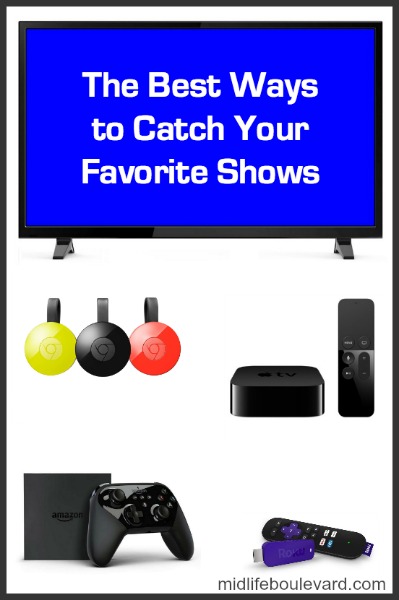 Within weeks, both had discarded their device in favor of something else; at that point neither the Boxee nor Sling TV worked well. Still, as of this writing my kids and their sweethearts haven’t resorted to satellite or cable. Instead they own gadgets that enable them to use Netflix, Hulu and other things (like accessing parental cable via the Internet — shh). My daughter is lucky enough to receive about 20 local network channels just through her antenna!

No wonder I have pondered whether I should cut the cord – as the process of getting rid of satellite and cable is often called (erroneously because you still need to get on the Internet to stream, which involves a cord). For me the answer is a resounding no. Where I live in New York City it is impossible to get reception on any of the networks just through a TV antenna. The buildings are too high and act like barriers. So no cutting of the cord for me.

I did price things out, though, and for some people going livestream the on demand options may make sense.

Devices: Gizmos that let you livestream have improved drastically over the past few years. Since my kids’ initial experiments. Google Chromecast costs $35 and you get over 1,000 channels built in (most of them not really useful). The various Roku players start at $35 and go to about $140 for the Roku 4, which takes voice commands and handles 4K content. However, there isn’t much 4K content out there, and what’s there is expensive. Some people love the Amazon Fire Stick (about $40), Fire TV (about $100) or the Fire TV Gaming Edition (about $150). The new 2015 Apple TV is kind of a disappointment for the fanboys and fangirls who were expecting something more spectacular (i.e., great original content) at a lower price point than $149 or $199, depending on the amount of memory. Thing is, if you buy an Amazon product, you’re not going to be able to watch a movie or series (like the Danish political thriller, Borgen) that is available for livestream only through the iTunes store, and Apple TV is a no-go for some movies available only through Amazon. I can’t think of one of the livestreaming gadgets that doesn’t have limitations.

Costs: This brings us back to how much going cable- or satellite-free really costs. Yes, Netflix is creating some of the best original drama ever, like Orange is the New Black, House of Cards and Master of None. Netflix charges $7.99 or $8.99 a month (depending on whether you became a subscriber before or after May 2014). You can’t watch Netflix on cable or satellite, however — although many Blu-ray players and all “smart TVs” offer the option. So that’s an argument for having a livestreamer. Still, in my opinion a ton of the free content on Netflix is utter drek.

Let’s say, however, that you’re thinking of getting rid of your cable/satellite. Most of the livestreaming devices offer access to HBO, Showtime, and even networks like CBS. You have to pay, though, for each channel. That’s about $15/month for HBO, $11 for Showtime, and $6 for the networks. If you have Sling TV, you can add very basic Dish channels for $30/month. It begins to add up.

By comparison, basic, basic, basic cable/satellite starts at about $25/month (if you’re living in a really inexpensive area), including one receiver and a remote (which you now have to rent by the month with most providers). That may not even include Nickelodeon or the Cartoon Network. It certainly won’t cover Starz, HBO, AMC, and so on. A good cable/satellite package can come to about $100/month or more.

But wait! There’s more to make the choice difficult. Many cable companies give package deals if you also buy your Internet connection from them, and Time Warner, for one, will practically pay you to add on their cable-based telephone service.

In the end you have to do your own math. My math got a little complicated because of my lack of antenna-access to free Network television. Oh, by the way, don’t imagine I was able to work this out on my own. I came across a terrific tool on The Verge, clicked my priorities, and there I was with a price above what I’m paying now.

That’s not to say that my husband and I aren’t paying for channels we don’t use. If we watch only three or four Showtime series, why am I paying over $160 a year for essentially 30 or 40 shows? It would be cheaper to wait for everything to come out on DVD and then just rent. Of course, by that point I would have read the reviews and known all the plot, and ruined my own fun.

As they say in show biz, That’s Entertainment!

Have you cut the cord? Do you not watch television at all (which actually described me for about 10 years until I somehow discovered the pleasures of binge-watching)? Let’s have a conversation in the comments below.

Merry Christmas! I hope you're enjoying the long holiday weekend. Here at Midlife Boulevard we want to celebrate both the...