Editor’s note: This is a bloghop! Be sure to scroll to the end of this post to read more from bloggers about the best gift they’ve ever given or received.

2005 was the year I grabbed Christmas by the jingle bells and yanked it back from the precipice of defeat. It was the year of the Barbie Travel Train Derailment. 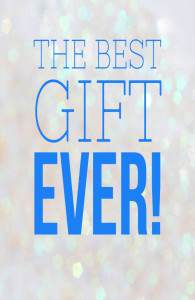 I am a take-it-or-leave it mom. With four kids I cannot afford to meet detailed requests– I have to run a tight ship. I do not care if you don’t have a taste for broccoli. I made broccoli. You can eat it or not, but I won’t make green beans to order.

Of course I would try to deliver at Christmas time. Letters were waylaid before mailing to Santa so I could know each child’s heart’s desire. I was so lucky that my children’s wish lists never intersected with the impossible-to-get toy of the year.

1997 was a near miss. My husband and I stumbled across Tickle Me Elmo while shopping for my nephew’s birthday in July. By December you couldn’t get one of those fuzzy red demons without paying in black eyes and chipped teeth. My nephew already had the hot toy and I didn’t have to enter the Black Friday Walmart Thunderdome.

My luck ran out in 2005. My daughter wanted a purple plastic Barbie Travel Train with real train noises and fold down sleeping bunks. Even I thought it was awesome. It was the perfect accessory for the Lindsay Lohan Barbie we had already snagged (the doll with a velvet rope and no panties).

We ordered the travel train, and I basked in the knowledge that Christmas was secure. God bless you, Internet shopping! You take away the cares of the moms. You leadeth me toward cocoa on the couch instead of late-night queues in front of Toys-R-Us. I praise your holy handmaid, UPS. I bless your—wait a second. Cannot fulfill order? What the frankincense?

Then the five steps of shopping grief began.

The night before Christmas came with no Barbie Travel Train. We did find a Toys-R-Us in Knoxville, Tennessee, that claimed to have a shipment arriving December 27th. Although this was EIGHT HOURS FROM OUR HOUSE, we were going there the day after Christmas to visit family.

So, we printed a note from Santa saying my daughter had a treasure hunt at MamMaw’s house. She bought it loved it. Two days later we walked into Toys-R-Us, followed the golden beacon of light to the Barbie aisle and found what Santa had promised. She didn’t even notice we had to pay for it.

In the end, it was a pretty cool toy. It gave lots of naked Barbies imaginary trips across the country to visit Lindsay Lohan Barbie in da club. When my daughters outgrew it, we passed it on to friends with four little girls. As far as I know, naked Barbies are still riding the rails of imagination with my own little Christmas miracle.

One nice thing about your kids getting older is not having to stress about buying the coveted toy of the year. There are times when I miss the toys, but it's stories like these that make me grateful we are past that stage.

You are so funny, Anne! And a dedicated mom-gift-giver, as well. What will you think of next??

Now, that is impressive, my friend! I always knew you were a miracle worker! I remember fighting crowds at Toys R Us for Power Rangers and bargaining for Beanie Babies but somehow we missed out on the Lindsay Lohan Barbie. Hilarious!

Okay, I can never live up to that kind of dedicated parenthood Anne. WTF? You have to dial it back this year so the rest of us can catch up. That means a lump of coal and a New Directions Henry Barbie Doll in their stockings. And that's it!

Ha! You are one funny writer. Lindasey Lohan Barbi? Who knew? Love that you make a veggie and that is it. I[m one of those mothers that makes about four meals so that God forbid someone not be happy.

Thanks for being such a funny lady!

The Story of the Blue Lights

Once upon a time, in a neighborhood not far from yours, lived a beautiful, blonde-haired, blue-eyed little girl who loved...