Please note that some links are affiliate links. If you click through and make a purchase, we receive a small percentage that helps keep us in business. Thank you for supporting Midlife Boulevard. 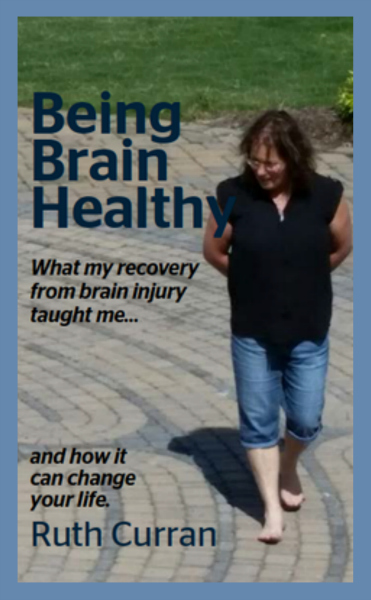 Ruth Curran was in a terrible car accident.

“I remember feeling like the tears were burning trails down my cheeks as I realized something was really wrong, something I could not easily change or understand — even when I tried hard to focus. My words made no sense. My sentences had no structure. I jumped from thought to thought without logic or continuity.”

It’s one of those things that we all ask ourselves, “What would I do if that happened to me?”

And there is no real answer. We may think we know, but as a therapist I have found that frequently we don’t.

Ruth has written a book, Being Brain Healthy: What my recovery from brain injury taught me… and how it can change your life. She painstakingly puts the pieces of her mind back together. She learns which friends could support and embrace the changes in her, and help keep her safe. It wasn’t all of them. Some of them drifted off, too uncomfortable with the loss, not knowing how to act. She looked normal… why didn’t she act normal?

Her husband was there to normalize the things she became confused by, and remind her it was due to the accident. She grasped whatever learning she could find. After a brain injury, neurons die in a “cascading” fashion, like a long line of dominos falling, one right after the other. One day, it runs out of energy. But you don’t know when that will happen. There are no actual ways to measure — no tests to run. It is reflected in either growing or lessening mental abilities.

Frightening, to say the least.

As she tried to grieve the mind that she had always taken for granted (as we all do), she accepted every bit of advice and support anyone gave her. But especially the cognitive rehabilitation experts. This was not going to remain her normal if she had anything to do with it.

There was one piece of advice she couldn’t stomach. A therapist, that hadn’t been a member of her regular team, stated this after meeting her, “I don’t know why you are so unhappy. You are smarter now than most people will ever be.” Ruth was incensed, and “stormed out of her office, and without slowing down, walked directly and literally into the wall, face first, just outside the door.” The message was that her grief wasn’t allowed. That she should count her blessings.

It’s a damaging, discounting message to give, or to hear.

Her years-long trek began each and every day, practicing using her mind. Every mental game and memory-enhancing task that she could find, she performed. Tedious, and tiring. But she discovered a lot about the intricacies of brain structure and function, and these facts fed her mind, her curiosity, and her hope that new neurons in the brain could be created — if the cognitive system was challenged.

So challenge it, she did.

This section is literally packed with information, and struck excited chords in my thinking. I found myself reading, and putting connections together in my mind. New terms, new brain research. Reading them, trying to understand them, is asking yourself, and your own mind, to venture into a world that most of us have not.

It’s well worth the challenge. And we have now learned that challenge is what the brain needs to grow. Perhaps I birthed a few neurons in the fifth chapter.

One of the most poignant elements of her experience was that commonly, after brain injury, apathy sets in. Not necessarily depression, but a lack of purpose. To Ruth’s amazement and joy, it was her forcing herself to regain empathy for others, something she had done quite easily in the past, that led her out of what she terms an apathetic “fog.” She would pick someone, and try to see the world through their eyes. It was regaining that purpose — that goal of trying to feel what her son or husband might be feeling – that gave her back a sense of meaning.

If this doesn’t have meaning for all of us, head injury or no head injury, I don’t know what does.

Her five basic tenets for healing her injury sound simple. Be active. Be social. Be engaged. Be purposeful. Be complicated. If you do, you will feed your brain — literally. And she talks in detail about how to do all of them. It’s great advice for aging, facing illness or injury that affects your mental functioning, or simply living well.

Ruth has also created “Cranium Crunches”, a website full of mental games and challenges. She’s continuing to help others, in their fight to retain and grow their minds.

I think she did a good job at getting that empathy back.

You can pick up a copy of this wonderful learning tool on Amazon. Or you can contact the author directly.

Dr. Rutherford was not paid or solicited for this review by the author or publisher.

This is incredible. I have a family member struggling with brain injury...it is discombobulating to say the least. This woman sounds brave and is a great writer to boot.

I hope you will get her book Anna for your family member, or simply for yourself. Thanks so much for commenting.

What I Learned From My Latest Kitchen Fail

This post first appeared on Mona Andrei's personal blog, Moxie-Dude. “So how did that maple-pecan cornmeal bread turn out?” That...