Connie McLeod’s life was already in the middle of a storm when Hurricane Katrina hit New Orleans and sent thousands to her town of Baton Rouge. Here she recounts those days – the good and the bad. Read more from Connie on her blog. 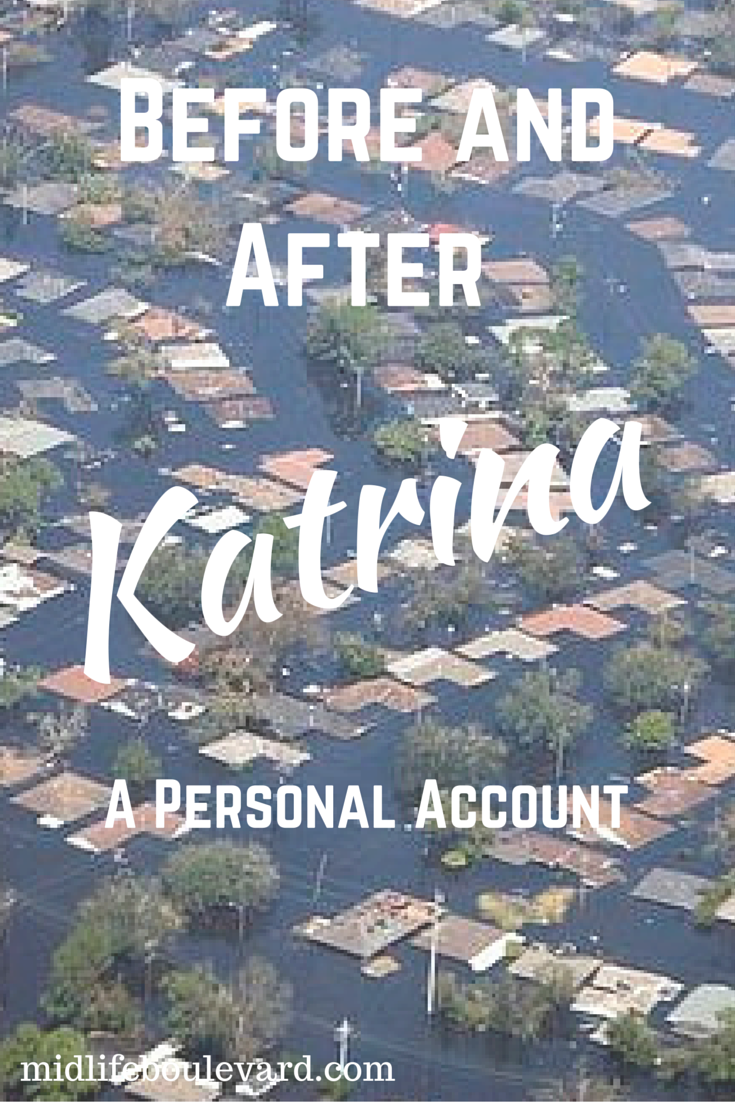 Before and after Katrina is how we mark time down here in south Louisiana. There have been other storms since then, but 10 years later, if someone talks about THE storm, you know they’re talking about Katrina. It’s the event that changed our lives forever. What makes my story somewhat unique is that it was during this dark, stormy time that I experienced the best of humankind.

As the storm approached the bigger event in my life was that my husband had moved out the week before. I would be weathering the storm without him with my then 15-year-old daughter. I don’t remember being worried; I’d been through hurricanes before and knew the drill. Baton Rouge is far enough inland that it’s where people evacuate. The next morning the storm had barely impacted us and I went back to work.

Early that morning, even New Orleans appeared to have dodged the bullet. The storm had not hit NOLA with full impact. Mississippi was a whole other story. By mid-morning, there was breaking news. The levees were breached and New Orleans was filling up with water like the geographic bowl it was. My work friend and I seemed to be the only ones in our office aware of the seismic shift that had just happened to our world. Our boss was more concerned about ad deadlines and couldn’t grasp that the nightmare everyone knew would someday happen, was upon us.

The hours, days and weeks that followed have now become a blur. It would be days or weeks before we could contact our friends or family in the drowned city 90 miles away. What we did know was that Baton Rouge instantly doubled in size. The streets were completely clogged with evacuees, the grocery shelves were empty and Baton Rouge welcomed friends, family and strangers into their homes for weeks and even months.

I work in marketing at Woman’s, a specialty hospital and the largest OB hospital in the region. When they evacuated the NOLA hospitals’ tiniest, most vulnerable babies and the moms who had just delivered, or were still in labor, they helicoptered them to Woman’s. This is when husbands were separated from their wives, mothers from their babies, and parents from their children.

Woman’s was where these families were eventually reunited. The world media descended on us because we were the happy ending story in a region filled with tragedy. Patients arrived in their hospital gowns; families arrived with only their flood-soaked clothes, desperately looking for their wives, moms and babies.

Those of us not involved in direct patient care did whatever job was needed. The staff went home and cleaned out closets to bring clothes to our patients and families in need. I was my daughter’s Girl Scout leader. I volunteered the troop, who was still out of school, and they gladly came to help. The Scouts sorted and organized the mountains of donated clothes that arrived crammed in plastic garbage bags. They collected the clothes orders from the nurses and delivered the needed clothes. These teen girls’ shopping skills proved invaluable as they set up this “Clothes Store” housed in the hospital’s medical library. We heard first-hand accounts of the horrors of what had happened as the clothes were received with tears, hugs and gratitude. We all did a lot of growing up.

We heard about the nurse who had learned that one of her patients had finally located her young son who had been put on a bus and sent to Houston. This nurse drove all night to Houston (5-hours away) to bring this son back to his mom. This was the kind of story I was experiencing amidst the stories of death, gunfire, drowning, looting and fear that filled the news.

It would be months later before I drove down to see the devastation first hand. It was like entering a war zone. Mile upon mile of devastation, and empty buildings, and no people on street after street. The black cloud of depression hung over the area for years.

It’s now been a decade.

I was recently visiting with a dear friend whose beautiful home overlooks Lake Pontchartrain. It received storm damage, but remained livable. She said she has no memories of the 5 years post Katrina. She took an early retirement from working in the criminal justice system. Her stories are the opposite of mine. She did not see the best of human behavior. I’m sure this was an unspoken factor in her taking an early retirement.

New Orleans has a revived spirit. Young entrepreneurs flooded the city post-storm and brought their youthful energy to this old town. Many stayed and made it their home. That depressed cloud is now gone. It’s still a city that is rebuilding; there’s still too many impoverished, too much crime, and really, really bad roads. But its jazzy, gritty, spirit is once again alive and well.

Baton Rouge no longer feels like the country town it once was. It has a thriving downtown and sprawling suburbs. Like New Orleans it’s now a city that has too many impoverished, too much crime and really bad traffic. But there’s a creative spirit in the air that extends beyond LSU football season.

The storm forced Woman’s Hospital to move up their expansion plans. When Baton Rouge instantly grew, so did the needs of the community. Our brand spanking new hospital is now 3 years old. Whenever I hear a helicopter, I flash back to those Katrina days. There was the constant sound of helicopters overhead. Helicopters still land at our new helipad bringing moms and frail babies, but these patients aren’t desperate and lost from their families.

That Scout troop stayed together through High School and took a trip to Italy together their Senior year. I’ve now been divorced for a decade. I’ve built a new life with my wonderful sweetie, Steve. My daughter’s dad and I sat by each other and watched with pride when our baby girl graduated from LSU a few years ago. We’ll all have dinner together when she flies in from Chicago for a visit.

I have many fond memories of trips to New Orleans before the storm, after the storm we have never had a chance to return. It is on the list and we are going to try in the next couple of years. Thanks for sharing your story.

that was just amazing - I love how the scouts rose to the occasion and that people stepped up when they saw the need - thanks so much for telling the story :) ~ Leanne

That troop was together from kindergarten through their senior year in high school. They were a force of nature themselves. I loved that group of girls.

That was beautiful. I've heard so many stories about the worst side of people during Katrina. Thank you for sharing some of the positive things that happened.

There was so much tragedy that positive stories were hard to come by. I'm very fortunate to work where I do. It really is a special place.

Wow…Wait until you taste this delectable recipe! It’s a low carb, calorie and fat variation of Mu Shu chicken or...