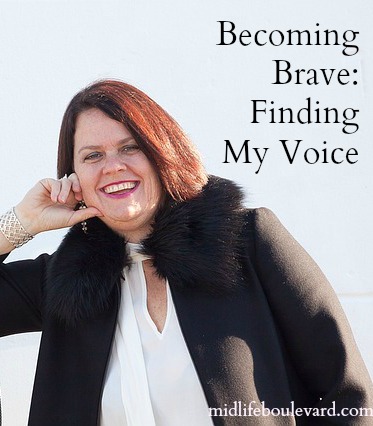 Stevie Nicks was right. Time really does make you bolder.

Folks who know me now have a hard time comprehending that there was a time when I wouldn’t stand up for myself. Because these days you pretty much know where you stand with me. But it was not always the case.

It may be hard to believe that there was a time in my life when the mere thought of standing up for myself made me tremble in paralyzing fear. But there was. This fear permeated all aspects of my life: school, relationships, jobs. I did not express myself. I did not challenge. I did not speak up. I was the most non-confrontational person on the planet.

Growing up, I was the good girl. The one who complied with all instructions, usually with a smile. I sought validation from others in everything I did, as if the approval of others was the only way I could be happy. My parents didn’t push me, it was just the way I was wired. A perfectionist from birth.

The thought of speaking up to a stranger in a grocery store would have me abandoning my shopping cart and digging for my car keys. The notion of defending myself in the workplace made me want to quit my job. I was a pushover.

Beginning my adult life as an Officer’s Wife didn’t help. As a matter of fact, upon arrival at his duty station two days after we were married, I was handed a copy of a book called Mrs. Lieutenant, a social guide to being an Army officer’s wife. More etiquette and expectations. I did exactly what that book said I was supposed to. I dressed the way it suggested. I learned the proper greetings and attended the social events. I served my husband, the community, and the Army with a smile.

When my children were born, the pattern continued. Every teacher knew she could count on me, because I never said “no.” Even when I should have.

I seemed to disappear behind this person who couldn’t speak up.

But somewhere along the way the need to serve myself surfaced. And I found my voice.

Then I got a cancer diagnosis. And I cared a little less about pleasing others.

Then Hurricane Katrina shook my world. And standing up for myself became necessary for survival.

Then my mother died. And I learned that our legacy outlives us.

Then my husband spent a year in Iraq. And being strong was all I had left.

Then I learned to be brave.

Winter storm "Jonas" (why does the Weather Channel insist we name All. The. Storms.?) reminded me how increasingly dependent we...