Writer Roz Warren remembers her experience at the Beatles concert at the Olympia Stadium on August 13, 1966. She compares it to her recent concert experience at a Jonathan Coulton show.

Being a Beatles fan was a large part of who you were as an American girl in 1966, at least at our school in Detroit, and really, at everyone‘s school everywhere.  You bought each new 45 the moment it came out, and drove your folks nuts by playing it incessantly. You turned up the radio whenever  “If I Fell” came on. You read about the Fab Four in Tiger Beat and plastered your bedroom walls with their posters. You slept with a picture of George (or John or Paul or Ringo) under your pillow. 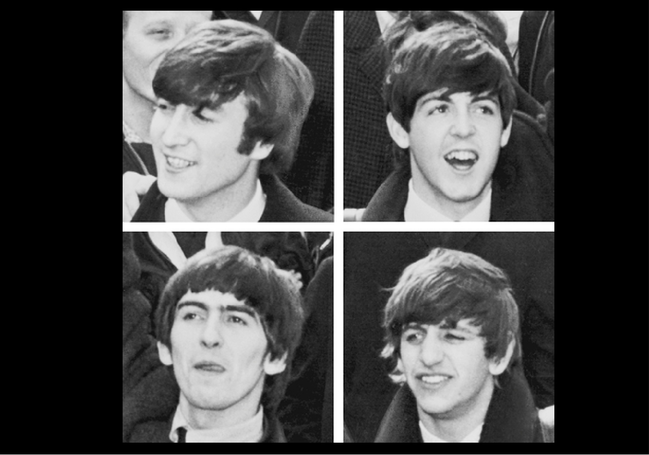 Playing amazing love songs in matching mod suits and edgy adorable haircuts, the Beatles were custom made for a 12-year-old girl to crush out on. Not only that but they looked as if they were having a blast, and refused to take anything seriously.

When a reporter asked, in “A Hard Days Night,” (my favorite movie)  if he were a Mod or a rocker, George famously responded: “I’m a mocker.” And I was immediately in love.

So when my friend Gail told me that her uncle, who owned a parking lot near Olympia Stadium, had managed to get his hands on a pair of tickets to the Beatles August 13 sold-out show, I was thrilled. I was a serious piano student, and my parents took me often to see the Detroit Symphony Orchestra.  But the Beatles weren’t Beethoven.  This, I knew, would be very different.

So what do I actually remember about that long-ago show, 47 years ago?

Lots and lots of waiting, almost levitating with excitement, in the mammoth, buzzing-with-anticipation arena, through an interminable series of opening bands.  Until finally, at long last, the  Beatles took the stage.

A zillion flash bulbs began to pop, fans pelted the band with jelly beans. (George had made the mistake of mentioning that he liked them in an interview.) and everyone in the sold-out stadium began screaming at the top of their lungs.

Then with “She’s a Woman” (to this day, one of my favorites)  John, Paul, George and Ringo began to play.

Okay, so while I can say that I saw the Beatles in 1966, I can’t honestly claim to have actually heard them, at least not very well. “I Feel Fine.“ “I Wanna Be Your Man.“ These were my favorite songs, and the sound was cranked up loud enough to reach us easily. But my fellow Beatlemaniacs insisted on screaming, shrieking, hollering and calling out   (“Paul! Paul! I Love you Paul! “Ringo! Ringo! Ringo! Ringo!”)  nonstop through the whole concert.  As the Beatles careened happily through their brief set list (11 songs, including the encore), their fans never once shut up.

Not even for “Yesterday.”  It was a far cry from the Detroit Symphony Orchestra.

But oh my, was it fun! To this adoring fan, it was heaven. I  LOVED the Beatles. How cool was it to be in the same room (albeit a very large room) with John and Paul and George and Ringo, grooving on their music?

As a concert, however, which is to say, an opportunity to hear and enjoy live music? It kinda sucked.  I didn’t blame the Beatles. It wasn’t their fault that their fans wouldn’t shut up. The hysteria that surrounded them was nothing they could do anything about. Except stop being so awesome, and THAT wasn’t about to happen.

Fast forward almost five decades, when I went to see singer-songwriter Jonathan Coulton, my current favorite musician, for the first time. My taste in music these days is, inexplicably, that of a 27-year-old computer nerd; lining up for the meet-and-greet after the show, I was decades older than anyone else there.

As Coulton signed my CD, I remarked that I might be his oldest fan.

“I’m better than the Beatles?” he asked incredulously.

“Well, no. But I enjoyed your show a lot more.”

I wouldn’t have missed seeing the Fab Four for anything. But Coulton’s show, in a smaller venue, with great acoustics, (and not a single screamer) while not a Mammoth Unforgettable Cultural Event, was, actually a much better concert.

Later, when I looked at the CD Coulton had signed for me, I saw that he’d inscribed it  “Roz, You are Not Old.”

I wonder if he’ll still be signing my Cds like that when I’m 64.

We share a love of the Fab Four! I missed seeing Sir Paul this week in San Francisco, but one day, maybe... My husband and I watched "A Hard Day's Night" instead of fighting traffic. I first saw it at a drive-in --still remember so many of those lines too. Thanks for the memories!