You know, being married to an airline pilot has its moments but the upside is the free travel. So when Sharon Greenthal asked on Midlife Boulevard if anyone wanted to go to a screening of a Jason Bateman movie in Beverly Hills, and review the movie, I was all over that like a cheap suit! And, besides, I have an old friend in Burbank with a guest bedroom and a snoring cat so I was up for it… 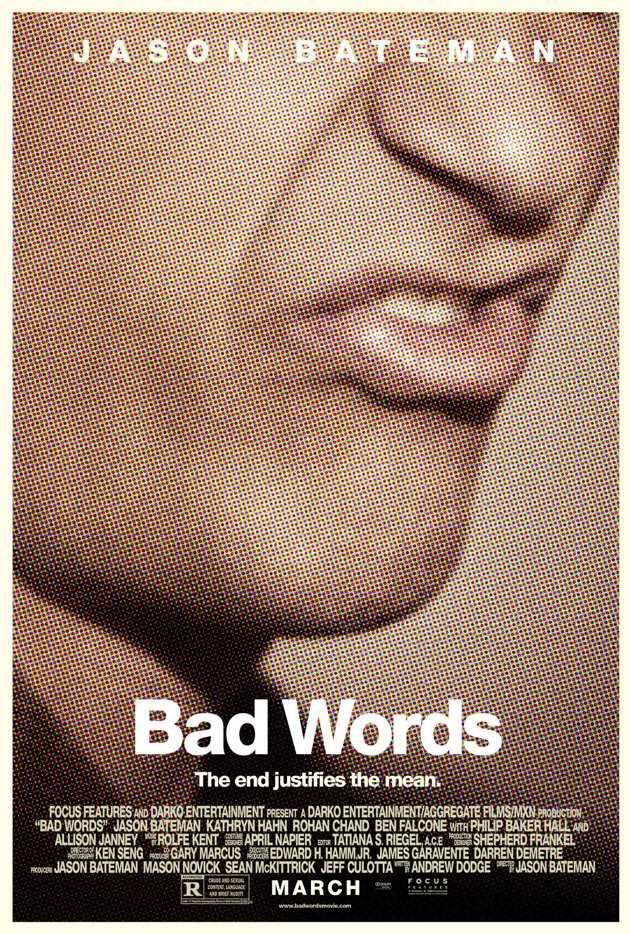 Jason Bateman, of Arrested Development/Identity Thief fame, in his directorial debut, is the main character in a somewhat dark yet funny (and often charming) comedy aptly named Bad Words. And yes, the language and obligatory sex scene does render it the R rating just so you know.

Bad Words is about the hijacking of a national spelling bee by an adult with an agenda and the subsequent comedy that ensues. Jason Bateman plays Guy Trilby, who has found a loophole in the eligibility for this spelling bee and uses it to enter the competition and finally have his day. What he has to do, though, to inflict chaos on the finals of the contest and hopefully guarantee his win is what this movie is about. He is being followed by a reporter, Jenny (Kathryn Hahn) who has the exclusive rights to his story. Along the way, he grudgingly befriends a young contestant, Chaitanya (Rohan Chan of Homeland) who reminds him of himself and who teaches him a little about how actions affect others.

Rounding out the excellent cast is Allison Janney of The Help and Philip Baker Hall of Argo. Jason plays a character that you simultaneously hate and root for at the same time. He definitely has relationship issues as the reporter tries to get closer to him-in more ways than one-and young Chai becomes the bright part of his time at the spelling bee. Rohan Chan steals the heart of this movie – he is funny, adorable, smart and totally taken by his friendship with Guy.

The premise of this movie is pretty formulaic. About halfway through you can figure out for yourself what is going to happen. Some of the laughs are out loud funny, others somewhat cringe-worthy that makes you go, “Ah, a young male screenwriter wrote this.” Bateman does a great job as Guy, the dialogue is fast and sharp and as a director he keeps this movie going along at a quick pace. His characters all fit in this movie well and the comedic scenes are pretty funny.

I did enjoy this movie and while some of the humor is sophomoric, and the dialogue is peppered with the F-Bomb, it was a fun diversion for the evening. This will be a fun Friday night rental for the husband and me – as this is his type of humor. No real deep movie here and the comedy will mostly appeal to a younger crowd. It is rated R for language and sexual content.

Read more from Mary Anne Payne on her blog, Forever 51

Living large and in charge and over 50, feeling 30. Instagram: hellomap

Living large and in charge and over 50, feeling 30. Instagram: hellomap

I'm glad you had fun, Mary Anne. Thanks for doing this for Midlife Boulevard!

Who Would You Invite to Your Women-Only Party?

I’ve often been called a “guy’s gal.” This is usually – I think– meant as a compliment. There are some...