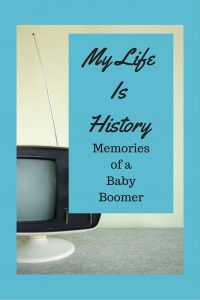 Meryl Baer can be found writing about whatever she wants – from travel to food to friends and relatives – over at Six Decades and Counting. This post about Baby Boomer memories was originally featured there.

Last week I attended a granddaughter’s graduation from preschool at a community center.

After the ceremony everyone adjourned to a large room for snacks, pictures, and goodie bags filled with a school T-shirt, yearbook, and months worth of schoolwork.

I wandered around, looking at bulletin boards announcing events for members of the community center.

One particular item caught my eye, a sign announcing a class titled, “The 1960’s: Life a Half Century Ago”.

And suddenly? I am history.

My entire generation is history. People – historians, sociologists, psychologists and others – study us.

I speculated about the instructor. An old geezer like myself? Or a fledgling historian with no idea what it was like living through the 60s, aging from a generation of innocent kids and a nation recovering from war, lulled by increasing economic prosperity and the relative calm of the 1950s, to a nation by the end of the 60s weary of an Asian war and transforming politically, economically, socially, culturally.

I started the 1960s as a kid attempting to live with such difficulties as one hard-wired wall phone in a house of four people…one black and white TV, no cable, 7 channels…one bathroom…no dishwasher (or microwave or computer or cell phone or DVDs).

I could tell stories:

About President Kennedy’s Cuban missile crisis speech. Unfortunately I was gossiping on the phone with a girlfriend!

About the music. Almost every one of every age is familiar with Beatles songs, but I could describe taking the train along with girlfriends to Shea Stadium, witnessing the group perform amidst a mob of screaming teenagers.

About the assassination of President Kennedy and an eighth-grade science class listening in disbelief as the school principal announced the tragedy over the school’s PA system.

About the first men on the moon, raging inflation, the escalation of a war Baby Boomers did not understand, how wardrobes changed when my high school dress code no longer required girls to wear skirts or dresses.

Staring at the sign I felt old. In the minds of the kids and parents milling around, celebrating four- and five-year-olds, the 1960s are the Stone Age, an era before Amazon, Google, Netflix, Twitter, Facebook and Snapchat, Instagram, Starbucks and Nutella.

And I am a relic of that primitive era.

A couple of days later I took my nine-year-old granddaughter Hailey clothing shopping for her birthday. We shopped at her favorite store, Justice, catering to kids and young teens, then walked around the mall and wandered into Chico’s, a favorite clothing store of mine.

Afterward Hailey announced to the grown-ups – her parents – that I shop at an old lady’s store, fuddy-duddy one of the eloquent terms she used.

OK, I accept the description, but my outfits are very different from the house-dresses my grandmother wore or my mom’s clothes. I don’t think Mom ever wore jeans.

The 1960s are history, occurring over half a century ago, and I am older than half a century. It is therefore time to, as the humorist Erma Bombeck stated, to “Seize the moment. Remember all those women on the ‘Titanic’ who waved off the dessert cart.”

Meryl Baer is a recovering financial professional now freelance writer/blogger living at the Jersey shore. She travels a lot, but when home takes zumba and yoga, walks on the beach and writes. Check out her take on life, travel, cycling, kayaking, grandparenting, food and whatever else she finds interesting at the moment on her blog, Six Decades and Counting - http://sixdecadesandcounting.blogspot.com.

I remember all of these things too. And actually, I'm pretty proud of our generation! Thank you for reminding me of things I hadn't thought about for a while!

I love this! It captures just what I'm feeling. As a high school graduate of 1968 I'm right there with you (and Chicos is my fav store)!

So glad you enjoyed my article. We are on the same wavelength!

We must be the same age, Meryl, because I remember everything including being in 8th grade when Kennedy was shot. I live at the Jersey shore, too. It's interesting, in this year's political climate, how there are so many references to the 60's. It was worse than now, as far as war is concerned, but politically it's still crazy. As for fashion...I don't see a problem with Chico's. b

We definitely lived through tumultuous times, although I don't think we realized how crazy they were at the time...And Chico's, despite my granddaughter's comments, is my go-to fashion store!

We welcome Ligeia to Midlife Boulevard - as this is her first submission. She blogs regularly at Trueheart Gal. This...