On a trip to Thailand, travel blogger Tam Warner Minton visited an ethical elephant preserve that protects the endangered Asian elephant. Learn about their lives before and after finding a home at the preserve, and how you can help protect these majestic creatures. Read more from Tam Warner Minton on her blog, Travels with Tam

Asian Elephants: A History in Thailand

Everyone who travels to Thailand wants to be with the Asian elephants, advertised for trekking, riding, and shows. Elephants are highly revered in Thai and Buddhist traditions, and were used for warfare, much like horses in prior times, and work in the logging industry.

Elephants, thankfully, are no longer used for the logging industry in Thailand, as the country has been over-logged and it is now illegal. 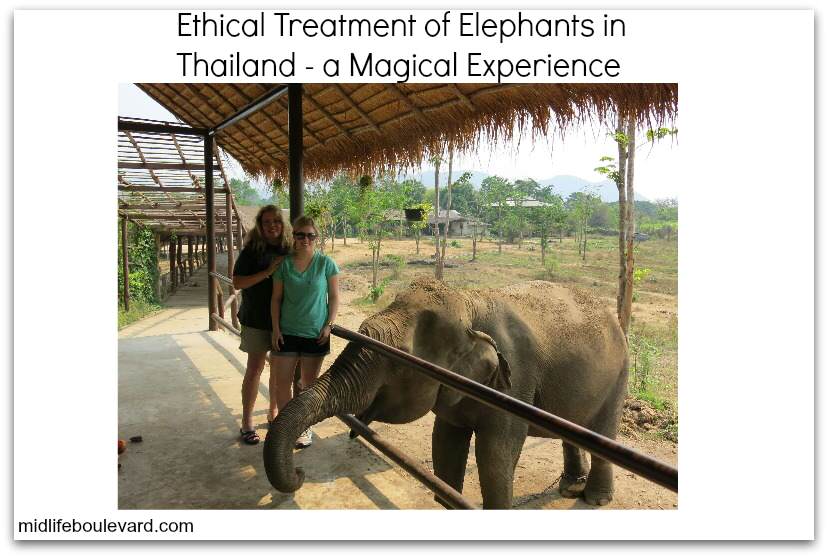 At the time the practice was stopped, the late 1980s, there were elephants and their “mahouts” (handlers, trainers, owners) who were suddenly without work. These mahouts began using their elephants to beg on the streets. They turned their elephants into trekking elephants with a box on the elephant’s back for people to sit in (these are very harmful to elephants as their backs are the weakest part of their body),or training the elephants to perform in shows.

The only safe way to ride an elephant (for the elephant)is to ride on their necks. There are still some mahouts who work illegal logging camps on the border of Myanmar and Thailand, who give their elephants “speed” to make them work longer and faster, and who abuse their elephants with the tools of the mahout: chains, the hook, the long pole, and the short pole. These are the traditional tools used to “break” elephants, and to control them.

The hook is particularly horrible, and if you see an elephant with scars, open sores, wounds, particularly around the ears or under the arms–you’ll know it is being abused with the hook. Using the hook side of the tool is not necessary, regardless of what any mahout tells you, the elephant is hurt by it and it causes them pain and injury. Period.

Where once there were nearly 100,000 wild Asian elephants roaming the jungles of Asia, there are now about 2000 wild elephants left in Thailand. They are terribly endangered as their habitat has been so altered and destroyed; they migrate the same way they did for hundreds of years…only now there are farms in their way. Farmers do not hesitate to take action against elephants who threaten their crops.

It is a tragedy that it is really not a question of IF the Asian elephant will become extinct; it is a question of WHEN. With only 2000 left in the wild, and approximately 2000 “domesticated” elephants in Thailand (including those in sanctuaries), it won’t be long until they are gone.

The elephant is a symbol of Thai Buddhism, and considered to be an animal who brings good luck. When I planned my trip to Thailand I very badly wanted to see and spend time with elephants, but I didn’t want to cause any harm to them.

I did some research, and I found Adore Animals on Ethical Elephant Tourism and another blog at Jdomb’s Travel  which helped me understand what I needed to look for. Most sanctuaries are located in the Chiang Mai area, quite north of Bangkok, but I did find Elephant’s World in Kanchanaburi City, 3 hours from Bangkok. 3 hours is not exactly close, especially when you only have 5 days, but Alexandra, my daughter, and I were determined to spend time volunteering with elephants, and it was an enriching, wonderful experience.

Elephant’s World was founded in 2008, by Dr. Samart Prasithpol (head of the Department of Livestock of Kanchanaburi province) to function as a ‘retirement home’ for elephants who were too old to work, too injured, or too ill.

Elephant’s World works FOR the elephants, to give them a peaceful, happy life. The elephants at Elephant’s World are well cared for, and enjoy a day of feeding, dusting themselves, playing in the mud, being fed some more (they LOVE to eat!) and then, having a lovely wash and dip in the river. 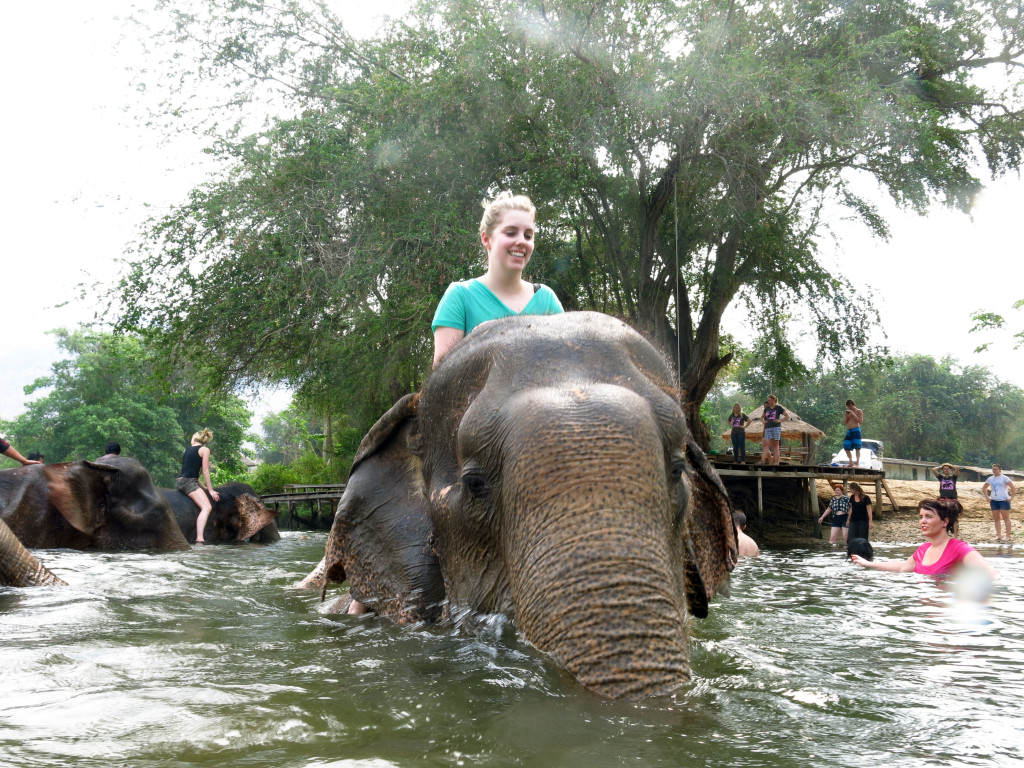 Allie riding on an elephant during swimming time

Our day began with a 3 hour drive to the sanctuary, upon arrival we met and talked with the volunteers about the elephants. The volunteers were very like those I worked with in Mozambique in 2012, mostly young adults who want to see the world and make a real difference, so volunteer tourism is a great way for them to travel. I wish more American young adults would do this type of traveling.

We started by learning the structure of the day, then we were given a huge basket of fruits to feed Lam Duan, a female elephant who is about 57 years old, used in the logging industry, then as a trekking elephant. She is completely blind, and likes to be fed directly in her mouth instead of using her trunk. She also does not like to be stroked or touched. Lam Duan has obviously been worked far too much, and because she is blind she is not readily accepted by the other elephants.

Elephants in the wild live in family groups and have deep emotional bonds, but elephants who are in sanctuaries lost their families long ago, and sometimes do not care for the other elephants around them. Lam Duan is kept away from most of the others.

A mahout would use a hook if Lam Duan was attacked by another elephant (which has happened) but mostly she just stays away from the group. She does like John, a small 7 year old bull who loves to play. Poor John was separated from his mother far too young, and seems to think that he should be able to make little elephants with the 50 and 70 year old matriarchs around him! They seem to just brush him off, but he does get excited!

Life for an Endangered Asian Elephants

During the volunteer day one feeds the elephants and then cuts sugar cane to make sticky rice balls with protein powder and veggies for the elephants to eat. Then you enjoy the show as the elephants have a mud bath, which they really enjoy. After that, it is time for the river, and swimming with the elephants!

What an incredible privilege to swim around an elephant, and to climb up on its neck for a ride and a dunk. The elephants really love their river swim and bath!

After their baths, once again we fed them baskets of fruit. We fed an elephant using her trunk, and it was so incredible! The elephant trunk has more muscle in it than the human body does. Isn’t that amazing? They grab that food and stuff it in their mouths very quickly, and if you don’t stuff food in the trunk, the trunk comes looking for you!

How You Can Help the Asian Elephants

Our day ended after feeding time, but there is one thing I want everyone to know: the sanctuary is trying very hard to raise the money to build a fence to keep the elephants out of the sugar cane of neighboring farmers. Until that fence can be built, the elephants have to be chained when they are not being active.

They need $20,000.00 to build that fence. Here is the link to donate. Be sure and let them know Travels with Tam sent you! It really is a good cause. These poor elephants have suffered so terribly, and it would be such a gift to them to be able to roam instead of being chained. I very much encourage you to give, even if it is just a few dollars!

You can also volunteer, whether for a day or a month or a year. What a great experience! Do check out Elephant’s World in Thailand! It was one of the best days of my trip to Thailand, and Alexandra felt the same.

My son started his first real job this summer in a town 2 and 1/2 hours away last week.  He...