Laura Ann Klein fell in love with an older man and felt the pain of being judged for her choice. She vows not to do the same. Read more from Laura Ann on her blog, Yellow House Days. 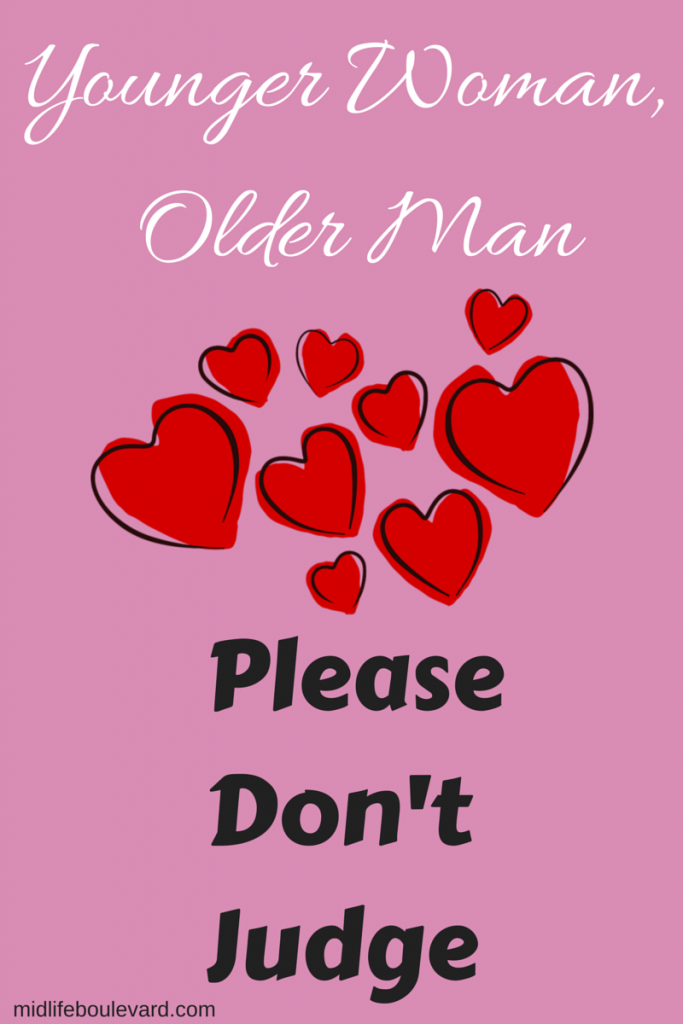 A few weeks ago, I published a funny piece about my ex-husband accusing me of a mid-life “problem” when I suddenly went blonde. I ended it with the twisted reminder I was his midlife crisis twenty-five years before. One of my favorite writers commented: “I am SO impressed that you were someone’s midlife crisis!” My heart swelled a little in my chest because I remembered exactly what it was like to be the woman in my twenties in love with a man in his forties. Our love affair was exhilarating but that didn’t come from the age difference.

When I met him, I didn’t realize he was in his mid-forties; I made him show me his driver’s license on our first date after he made a reference to the 1960s. He was (and still is at almost 70) extraordinarily youthful looking. No way was this guy 44. I almost didn’t see him again because he was so much older. He was the oldest person I had ever dated and I was the most youthful woman he had dated in many years. My family and friends assumed he was rich because why else would this twenty-something girl want to spend time with him. He was far from rich.

When we would meet new people the other assumption gutted me: I was the other woman and he had left behind a “haggard” 40-something wife. My parents were pretty awful, too. They thought I was crazy: “You’re going to take care of him when you are just in your 40s and he is in 60s…he could make you a young widow…are you sure you aren’t just his midlife crisis…just you watch, when you get close to 40 he will leave you for a younger woman…”

My parents were hypercritical, but the worst critics were his peers. His middle-aged female colleagues openly snubbed me. They would look through me like I had the IQ of a cotton swab. I was even asked if I had “daddy “ issues to love a man so much older than myself. I was told to watch out for his rampant insecurity because he must need a younger woman to look up to him like a hero or a god or a father.

Their open distrust and condescension remains the most shameful female behavior I have ever witnessed or experienced. Those work functions were often painful for me and played into every awkward socially anxious tendency I had. In most of their eyes, I was no more than a simpering, money-grubbing git. Fortunately, I had an allies in close friends, and in him. My ex-husband is a naturally sunny person and was mostly oblivious to the behavior. He was also a master at considering the source and would remind me of how unhappy the naysayers were.

Imagine the arctic frost when I became pregnant. The whispers were worse: I was accused of “trapping” him with a baby. A baby surely he didn’t want, given he was well past the age most men have children. When the truth of the matter: he was much more excited when I turned up pregnant. I was the one worried about his age and our age difference. Constantly doing the math of how old he would be when our child was ten, in high school, graduating from college…

I am still angry about the reactions and the prejudice I faced. Trapping him was so far from the truth. I loved him. I fell in love with a man who was active in the arts in our city, had a sharp sense of humor, and had a wonderful way about him. He fell in love with me, not because I was a fertile 28-year-old, but because I was lighthearted, funny, and warm. How dare women say those things to me, especially since they didn’t know me and didn’t bother to get to know me.

Over the last few years, I’ve watched a dear friend go through this prejudice. She is fifteen years younger than her partner/husband and the victim of the same assumptions. She too weathers dirty looks and snubs from women her husband’s age. But the horrible assumptions aren’t limited to women his age; years ago when they started dating, our co-workers—all in the same age group as ourselves–said terrible things about her: calling her a gold digger, a trophy wife. She is a trophy because she is a lovely and intelligent woman. She also loves this man with a rare and sweet passion.

Because of my experiences, I’m careful when I meet younger women dating or married to men in my age group. I spare my own psyche ridiculous female jealousy or the crone bitterness. Being happy for someone’s love and joy rests more easily on my face and enhances the smile lines rather than the frown lines. I don’t automatically assume the young woman is the other woman who split up a marriage nor do I name her as a trophy wife. I assume she fell in love with a man a generation or more her senior. I don’t assume she has “daddy” issues or wants to marry an ATM.

Women of a certain age should be better than those assumptions. After all, we have a decade or more experience and—hopefully—maturity on these younger peers. Grant them acceptance before assuming she fell in love with his wallet and he in love with her nubile fecundity. It’s not always about money and sex. Sometimes it’s about love.

I usually get dirty looks from younger guys when I am with my older partner... He is foreigner and they think that I love his wallet. I even get indirect insult like am desperate. They don't know I have a job and I even offer my partner my help for his financial shortage. It is a two way street.

Just happened to stumble across your blog & felt so compelled to write: I was 24 when I met my husband. He was just shy of 47. I had a harder time gaining my friends acceptance than I did my parents. I'm now 50 & he's 72. We've shared the loss of parents, one of his children from his previous marriage, multiple pets & mutual friends. I wouldn't trade what I've got for anything. I have no regrets & my relationship has outlasted the marriages of many of my cynical friends. I'm above average in appearance & formally educated. He also has "good genes."I don't consider myself desperate or "afraid of being alone." Here's the icing on the cake... I'm black. he's white.

Thank you for the comments. and it would be great if we could leave off judgements about other people's relationships. I too have never known anyone who married out of convenience. Stayed married for that reason, yes. But that's a whole 'nother subject.

I know two very vibrant, lovely ladies who are in marriages with men 20 years or more their seniors. Both are long-standing marriages. Both women are caring for men who are in their final years, maybe even months. The reality is, even though we've heard the story of the discarded wife and the callous ex going after the sweet young thing so many times, we can't really judge what's going on in either relationship. We gotta stop this business of judging others. Period.

Great post Laura! So true I have known many relationships that were younger/older on both accounts and the ones I know are all based on love!