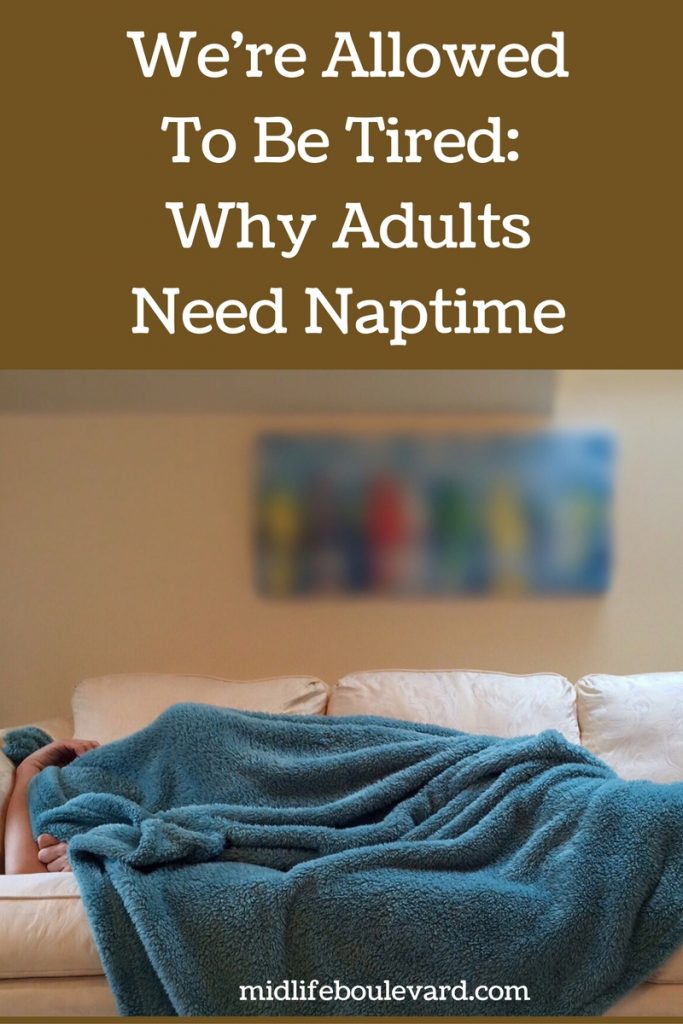 Sharon can be found on her site, Empty House Full Mind, and over on About.com as the Young Adults Expert. Do stop by and say hi and let her know if you think adults need naptime, too!

Recently I went to lunch with two of my oldest (not OLDEST) friends. One of them asked:

“Are there ever days you don’t think you can get out of bed?”

Well, yes. Yes there are. There are also days when I just don’t WANT to get out of bed – and therein lies the problem. Not just for me but, it seems, for all 3 of us at lunch that day. And I’ll bet for a lot of you, too.

We all feel guilty.

There we were, three 50-something women, all of us with jobs, busy lives, lots of responsibilities. We are all, in some ways, working harder than we did when we were raising our children. And yet, we feel guilty for occasionally not getting dressed until noon.

I have struggled with this ever since my youngest left for college, nearly 5 years ago.

Why am I so tired?

Not to mention peri- or full-fledged menopause.

Because I’m still not sure where I am on that continuum.

And so are my friends, the ones who are tired, too.

“Psshh,” you might be saying – especially if you’re older than I am. You’re still YOUNG!

Getting older can be a little bit hard. And if we’re being honest, sometimes it can be really hard. No matter what we do, whether we want to or not, we’re slowing down. And if we’re not slowing down, we’re working much, much harder at keeping ourselves going than we did, back in the day. Add to that this hazy, continuous guilt that so many women (sorry, but this truly doesn’t seem to happen to men) feel when we can’t keep up – or don’t want to – and it’s even more exhausting.

On top of that, we’re supposed to try to look as young as we can, but not too young. Is there a store for that? “Forever Not 21 But Not Old Either?”

The other night, while we were out to dinner, my husband suggested that we make plans a few times during the week (not on the weekend, we’ve got that covered most of the time) to go to dinner with other people. Nothing major, just grab a bite somewhere nearby, because, well, sometimes – not often – but sometimes, he gets a little… ummm… bored during the week in the evenings. This, from a man who gets up every morning at 6 am to swim for an hour, then works until 6 pm. Trust me, he’s tired, too.

I get up at 6 am also, but I’m not swimming for an hour. I’m downing coffee, reading emails and checking in on social media.

Bored??? With MOI??? How is that possible? I’ll tell you how it’s possible. Because by 7 pm, I’m pretty much done. I may have a few entertaining quips to toss his way during Extra or even The Daily Show (which we’re watching on our DVR from the night before – because we’re too tired to stay up that late), but I’m sorry, dear husband, I am just plain tuckered out.

When I told my friends this at lunch, which was the very same lunch we were at when we talked about being tired, they laughed. A lot. They feel the same way I do. Sure, every once in a while, it’s fun to do something more interesting for dinner than a turkey sandwich at the deli, but most of the time – nope.

We are all a bit worn out. Not just my friends and me, but women everywhere. Maybe all we need is a cookie and a glass of milk and a nap, and someone to tuck us in.

Amen! I keep two grand daughters during the day, work a volunteer job at church as if it were almost a full time job with emails, documents and meetings. My oldest grand reminded me the other day to smile. I used to never have to be reminded to smile. I'm not unhappy or depressed. Then I realized just the other day - dang it - I'm tired. Thank you for sharing your very insightful thoughts. (no, I"m not 50 - I made it to almost 66 before declaring 'tired').