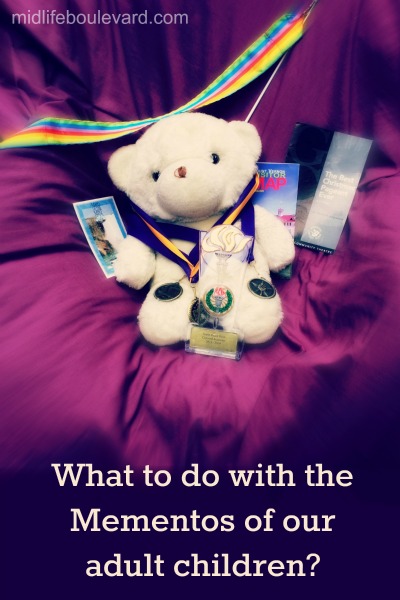 Am I my child’s repository? This is not an existential question. Now that the kids have moved out and we’re empty nesters, many of us are clearing out closets, purging storage spaces and lightening the load of stuff stored in our house. We’re faced with mementos that we don’t know what to do with. We may move to smaller quarters or stay put and reuse the now unoccupied bedrooms. Downsizing or rightsizing, we’re going through everything, which leads us to the papers, books, photos and assorted junk our kids have left behind.

We’ve probably already threatened them with the “take it now or it gets thrown out” ultimatum. They may opt for tossing it or possibly stop by to carry away an old teddy bear or two. That doesn’t mean we shouldn’t go through the leftovers and sift gold from dross. Kids marry, have homes of their own, start their own families. When that happens, some of the items piled in cardboard boxes and stuffed in bureau drawers may take on a new value.

Having gone through the Big Sift recently, I relied on three criteria to make save or dump decisions.

Would they want to share this memento with their children?

Taped-up hockey sticks, scarred action figures, Barbie dolls minus a part or two, tomes of poetry from high school English, a prom dress – they will not age well. Case in point, when my son was a wee lad he loved Matchbox cars and played with them endlessly. I saved the best of them. How could I get rid of something that was a huge chunk of his childhood? But years later when I took them out to let his children play with them, the cars were a chipped-paint mess. You couldn’t tell one car from another. Beyond their politeness in hearing how their dad loved to play with them, the Grands had little interest in the cars.

But it ain’t always so. My mother-in-law hit the savings jackpot.  Years ago when she told her college-age son (my future husband) to get rid of the stuff that was littering his room and closet, he was ready to dump his set of Lionel electric trains. He no longer had any interest in them. She looked ahead and wrapped each train car and the tracks in newspaper and stored them in a sturdy box. Years later, when our son was born, she delivered the train set, which not only provided great bonding moments for father and son but, 30 years later, delivered similar thrills for–and bonding with–visiting grandchildren.

Will they need it some day?

Should they reach their dotage and want to write their memoirs, some of the letters, reports, diaries and photos would be a necessary part of a primary historical record. But not everything. Such as the boxes of photos, particularly from their pre-smartphone college days. If they don’t take them away, a smattering of photos can be scanned and sent their way as a digital memory book–or they could become part of a celebratory e-book for, say, a Big Birthday. They are never too old to have a look back and see who they were when they were young.

As to letters from friends, you never know what will be meaningful years from now. A recent young adult book, “I Will Always Write Back: How One Letter Changed Two Lives” is based on letters between a school girl in New Jersey and a school boy in Zimbabwe. It’s moving story through letters traces the enormous impact the correspondence had on both their lives. Someone in the New Jersey family had the good sense to save those letters from the downsizing demons.

Does the sentimental value overwhelm the practical?

There may be letters from friends or grandparents that speak of important reminiscences or life’s values. There may be objects that embody a special time in their life. It might be the hand-knit blanket a grandma made especially for them or a weird sculpture that always sat on their desk or a stuffed animal that saw them through the traumas of growing up. No matter how scarred or worn, those mementos don’t lose their power.

The shelves of soccer trophies or drawers of swimming ribbons, the high school yearbooks and college textbooks may bring back a range of emotions, but a photo of them scanned into a digital record will suffice. That space can be cleared, shelves cleaned. The Lionel trains, though–wrapped and boxed–are a keeper.

For more on paring down, see Mary Quigley’s article on the AARP blog, How to Rid Your Home of Your Adult Children’s Stuff, and head on over to my blog for Five Tips for Rightsizing Overstuffed Attics, Closets and Bookshelves.

As Penelope Lemov, I'm a senior correspondent and finance columnist for a national magazine. Everyone else knows me as Penny. In that richer and more personal life, I have two grown children, both of whom have started families of their own--in cities far from the familial manse and from each other. Among the smallest denizens of that world, I'm PenPen. And that suits me best.

As Penelope Lemov, I'm a senior correspondent and finance columnist for a national magazine. Everyone else knows me as Penny. In that richer and more personal life, I have two grown children, both of whom have started families of their own--in cities far from the familial manse and from each other. Among the smallest denizens of that world, I'm PenPen. And that suits me best.

Do You Need Contraception After 40?

The contraception question. It's one I raise with my forty-something patients. And it always comes as news to them that they...