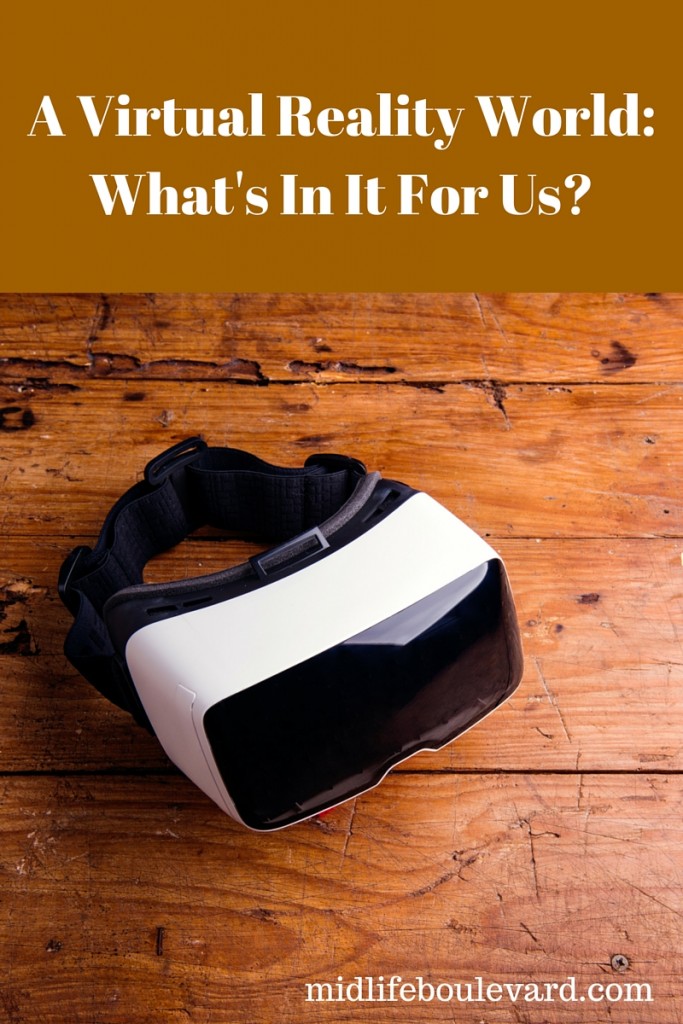 Have you seen the pictures of Occulus Rift yet? That’s the company that makes those spooky-looking virtual reality (VR) goggles that was bought by Mark Zuckerberg for $2 billion dollars in 2014. Some of us have also heard of Google Cardboard, the much, much, much less expensive product being sold (and even given away) by Google. Used with a smart phone, the cardboard headset provides users with a 360° view of any place they can think of to make them feel like they’re actually there.

I have had the opportunity to test both, the Occulus and Cardboard devices, and I urge anyone who has a chance to try one on. It’s quite an experience. A WOW! that 3D movies don’t come close to.

Still, the whole time the Occulus sat on my head I couldn’t help but feel as though I had stepped into science fiction. Maybe something akin to the Star Trek Holodeck of the TV and film franchise? You know – the room inside the starships where in the crew members could go and live out fantasies they created or ones that others made for them. There I was, with this futuristic thing on my head, in the middle of something truly out-of-body. or when I tried Google Cardboard, feeling like I actually was in a refugee camp — and my mind was saying, “this isn’t real, so what’s the use?”

Actual virtual reality (three words that don’t seem to really go together but for this instance do), is really quite different from the Star Trek creation — in fact, real VR works in a completely opposite way to the Holodeck. I felt less connection to the Occulus or Cardboard contraption than I do to the Holodeck conception. (Scientists think that there will probably never be a Holodeck, which may be a good thing.)

The gamers I know “got” Oculus Rift immediately. A true VR headset is loaded with sensors. This differs from the 360° immersive video devices, which if the price remains low enough your neighbor may soon by using to show you his vacation videos. These track your head and eye movements, so you really control the action. But I don’t play video games.

Oddly, I found the simpler Google Cardboard more appealing in that I could see how it could be useful to the general population. Let’s say I had a high-school-age child or grandchild about to embark on the college grand tour, and I wanted to limit the extensive number of schools on her visit list. Perhaps a few 360° videos could help her cross off some maybes?

And that reaction led me to finding out where in our lives, or the lives of real people, VR and 360° video technology might have a truly positive benefit. Here’s what I came up with:

Medical treatments. A study in Spain has shown that VR machines can help stroke victims regain the use of their limbs. Basically, the machine tricks the person into believing that the affected limb works better than it does. In turn, the person begins using that limb more, thus stimulating recovery. Some success has also been found in the treatment of PSTD patients. The person is exposed to the same scenario which set off the PTSD symptoms, so that the scenario becomes familiar instead of frightening. This treatment is being implemented with soldiers as well as victims of sexual assault and survivors of car crashes.

Sports training. You’ve lost an important tennis match. If you can get a 360° video, you can relive every swing, every serve. You can match your movements to your opponent’s so that next time you’ll be prepared. Just so you know I’m not a lone wolf here, the Dallas Cowboys have signed on with a VR company to train their quarterbacks. Not that it seems to have helped much in their 2015 season.

Public speaking. You can find a guy like the one who taught England’s King George VI to overcome his terrible lisp so he could speak effectively to his subjects on the eve of World War II, or you could use the Oculus app that lets you know if you’re inserting too many “ums” when you address crowds.

Crime scene visits. Sure. The best part of the TV show often occurs when the jury visits the crime scene. In real life, such excursions cost the taxpayers big bucks and extend the length of a trial. I can’t imagine that a judge would actually OK something like this. However, the technology exists. Really.

Travel for the homebound. A friend of mine who had hip surgery was not able to make it to the recent opening of the new Met Breuer Museum, something that she had been looking forward to as she is a lover of contemporary art. I’m told that someone was there making a 360° video, which she’ll be able to watch on a Google Cardboard set. Just think of the possibilities here! And for travel in general, too. You could check out places virtually before reserving airline tickets and hotel accommodations.

All-in-all I think I’m a here-and-now kind of gal, and I prefer actual reality to the virtual kind. But there seem to be many good uses for the new technology, and I’m happy about that. And, who knows? Five years ago I never thought I’d be streaming Netflix. I may be walking around with an Oculus on my head someday.

Why Don’t Women Wear Shorts After A Certain Age?

Kate blogs at KathrynMayer.com and can also be found on Facebook sharing stories freely with her self-described foul mouth and huge...