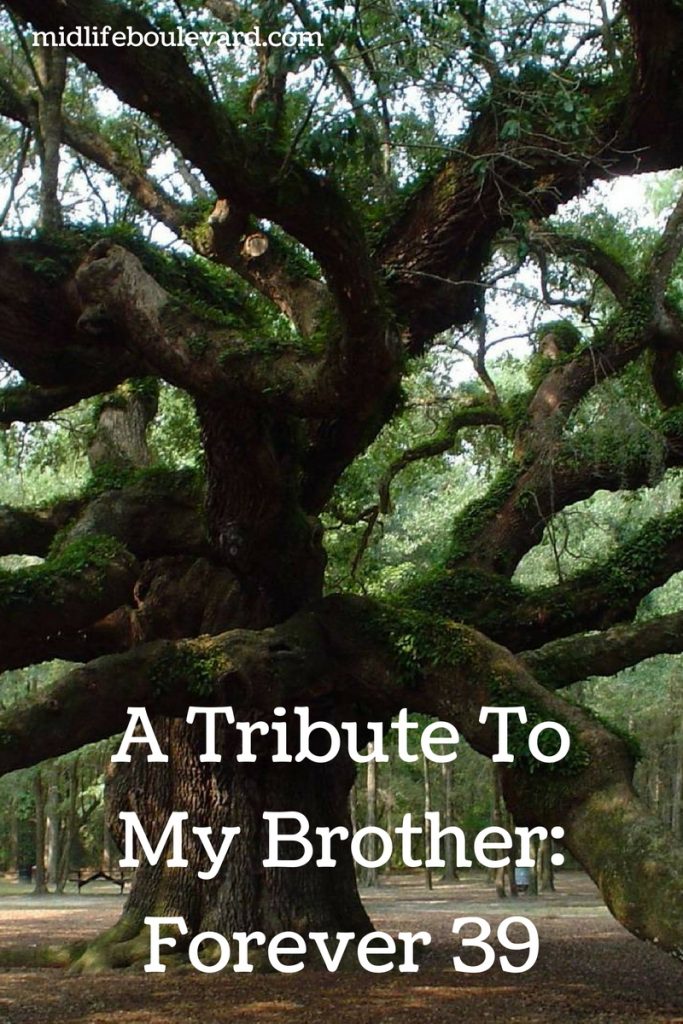 My brother and I loved to laugh.

When we were very young and he would sneak into my bed in the middle of the night after peeing in his own . . . this was the time that our secret world came alive. For some reason lying in the dark, knowing that we were supposed to be sleeping, was extremely funny to us.

Our mother’s voice from her own bedroom – tired, frustrated – would only succeed in making us laugh harder. We were being bad and we knew it. But the more frustrated our mother became, the harder it was to stop giggling.

So young. So happy. So safe and carefree.

And then we grew up and our private world faded away as the demands of adult relationships took over our lives.

My brother’s diagnosis was a shock to us all.

His eventual placement in palliative care screamed a truth that no one in my family was ready to hear: that after a four-year battle with unwelcome tumours in his brain, the end was all we had left to look forward to.

Despite this, my brother was surprisingly accepting. He took over his final home, a room in Montreal’s Mount Sinai Hospital, with the assertiveness of a business executive moving into a corner office. Everything had to be placed just so. At first, his mini fridge, laptop, and cell phone; all soon removed. His belongings eventually reduced to the necessities of sterile equipment used for monitoring the battle between drugs and disease.

My brother knew he would never return to his real home – the house he shared with his wife and two young daughters – and he voiced this mildly, que sera, sera.

As for me, 42 at the time, I couldn’t understand his seeming ability to treat a disappointing fate with such unquestioned acceptance.

My brother was two and a half years younger than me but had been the more rational one for as long as I could remember. Where my life was a scattering of experiences devoid of any connecting dots or defined goals, his was as orderly and sequential as an accountant’s ledger book. He finished college. Dated. Got married. Built a business. Had children. All in the correct order.

I know my brother loved me. But our grown-up differences irritated him as well.

“Even the radio stations in your car are disorganized!” I can still hear the echo of his frustration at a time much before the appearance of illness; when our lives were yet untouched by disease and naive to its effects on a family.

Up until the brain tumours took possession of his independence, my brother had been a pillar of a man. Not overly tall but with a dedicated drive much like the Gates and Jobs of the world.

“One day I’m going to own Montreal,” he had announced as a teenager. And it’s without exaggeration that I say he was well on his way to achieving a piece of that goal. With the bits and bytes of his college education, and the single-minded focus the rest of us deem excessive, my brother had managed to build a successful computer business. I would even go so far as to call it a small empire.

As my parents and I watched the much-hated illness alter the man we knew, ruthlessly violating his life and leaving only a shadow of his former self, we had no choice but to surrender to the fate of a losing battle.

Being the man’s man that he was, my brother suffered in silence as his body betrayed him to give way to disease. The only time he ever confided his secret thoughts to me about the unfairness of it all was on a Saturday in January, eight months before his last breath.

We were in his room, he in his hospital bed, me in the visitor’s chair beside him, my legs comfortably and possibly even protectively sprawled across his delicate body. We spent the entire day that way – together, content, our conversation following the hazy rhythm of his drug-induced consciousness.

I remember noticing how grotesquely odd it was that even with death bullying us into acceptance, other areas of my life continued to scream for attention: the project deadlines, snow-covered drive-way, neglected laundry . . . all reminder-generals that life, with the same brutal resolution as death, stops for no one.

But this was the first Saturday since my brother’s move into his conclusive room and damn everything else – I was spending it with him.

“Look at you,” his voice soft, full of regret. “You have nothing and yet you light up a room. Me? I have it all and look where it got me. Makes you wonder . . .” And then he drifted off to sleep again, leaving me to silently brood about the purpose behind my own vitality and mixed inadequacies.

“What’s your problem?” His abruptness, a dim shadow of the man he was, startled me out of a stoop of self-pity.

“Nothing,” I said defensively. “You basically called me a loser and then fell asleep on me.”

Suddenly time bent her cold, linear intentions and smiled upon us. My brother and I burst into a fit of laughter that mocked younger versions of us and our secret world.

The looks of concern as passersby peeked into the room were an invasive reminder that this was not a place to laugh, but a place to die. Much older now, not as safe and carefree, we rebelled as we had so many decades before, and giggled even harder.

I know that my grip on that moment was both fierce and selfish. Between breaths of laughter came cries of pain. The treatments intended to fight the enemy cells in my brother’s brain were simultaneously breaking his once black belt body into a dry-twigged state of osteoporosis.

My brother was loved.

His funeral was an attempt to celebrate his existence; to prevent his death from becoming bigger than his life.

Yet the emotions still swallowed me whole as I struggled to gulp down the sobs that gathered into a hard lump in my throat.

“With time, you’ll remember him without the sadness,” someone said as we stood watching the fresh clumps of dirt fall onto his lowered casket. And while I knew that these words were meant to console, they challenged my biggest fear. That I would lose the only piece I had left of my brother. My memory of him.

The gap between the present and my brother’s death on September 17, 2006 gets bigger with every passing year. Yet I still miss him. Even as I write this, the sadness gathers at the bottom of my eyes and my heart is heavy with an aching sorrow.

In its terminal way, the cancer changed us – my family and I. But the love that we share for him lives strong. There are framed pictures of him throughout our homes and his name creeps into so many of our conversations. We speak of him with conviction, refusing to let our voices crack as our gazes veer inward to our own special memories with him.

We speak of him. We remember him. We miss him.

It is a beautiful testimony of his last nine months a Mount Sinai Palliative care Unit waiting to die when it was not his time to go. Ten years have past and we still miss him terribly.