It’s Spring and that means it’s baseball season.  I happen to have a love/hate relationship with the game of baseball.

Which is kind of tricky because every spring and summer for the past 12 years my life has been consumed with this sport.  My husband started my son out in T-Ball when he was about 4 years old and we have spent approximately 50 million hours at various baseball fields since then.  And, my husband has been his team coach for most of that time. 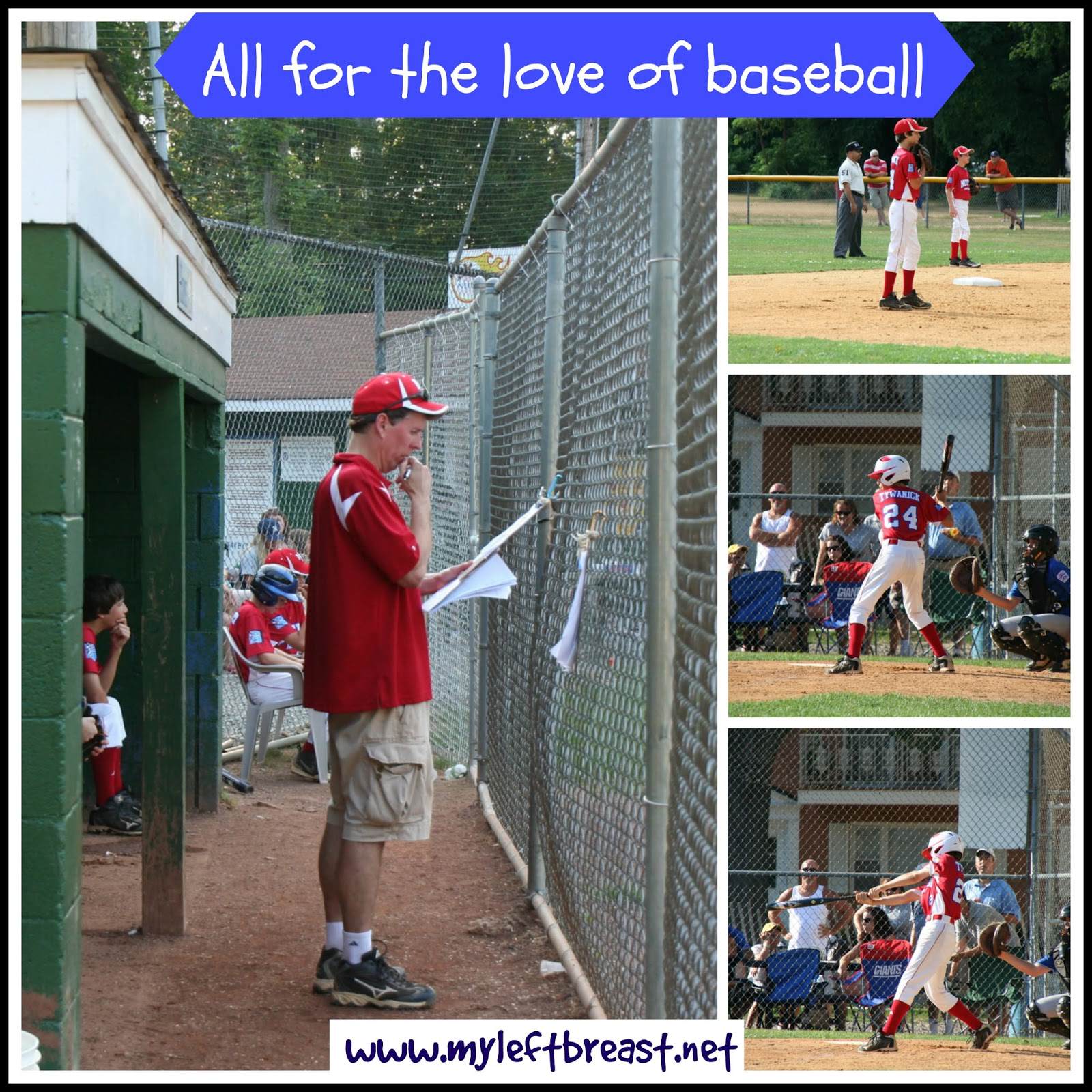 So, for any of the moms reading this with kids who are starting out in Little League, here are some of my musings on life as the mom of a baseball player and wife of a Little League baseball coach, gleaned from my gazillion hours of experience.

1.  Most important thing.  Bring a very, very comfy chair.  You’ll be sitting.  For a long time.
If the field DOES have bleachers, they’ll probably be metal, rusty, crooked and hard so bring a soft cushioned stadium seat with a back; you can get one at Walmart for about $10 bucks.  If they don’t have bleachers bring one of those chairs you can sling over your shoulder with a place to hold a water bottle or coffee, ’cause you’re going to be sitting for a LONG time.

2.  Bring lots of snacks.
There’s rarely anything good to eat at a Little League baseball field, and having been one of the moms manning the snack shack I can tell you, you don’t want to eat the food they make in there. It’s pretty scary.

One of the snack shacks we used to man in the early years didn’t even have hot water.  And don’t get me started on the hot dogs that are sitting in that boiling water on the stove for the ENTIRE GAME which lasts as I mentioned, on average 3 hours, and that’s not counting the fact that there are double hitters so those hot dogs could potentially be boiling in that pot for over 5 hours on any given game day!

3.  Now here’s an important point and it’s very tricky to manage so pay attention.You’re going to want to bring lots of water and coffee, because you’ll be there a long time and you’ll need to stay hydrated.  Plus you’ll need the coffee to keep you awake during the especially long games that start at 8:00 a.m. on a freezing cold April morning when they’re about 5 years old and the game is for sure going to last about 3 hours (’cause they’re only 5, so the games take FOREVER since none of them really know what they’re doing and every single inning takes at least 30 minutes).But the tricky part is that under NO CIRCUMSTANCES do you ever want to use the bathroom at a baseball game.

Because there’s NEVER a decent bathroom on a baseball field.  Most of them have port-a-johns and believe me, those things are nasty. And they never have toilet paper. And they usually sit waaaaaay across the field about a 15 minutes trek away from the stands over in the darkest, dankest corner of the parking lot among a puddle of suspiciously muddy water. So you don’t want to drink so much water and coffee that you have to, God forbid, actually use the bathroom.  Of course this can get awfully tricky what with all the water you’re going to need to stay hydrated and all the coffee you’re going to drink to stay awake.But you’re a mom, so you’ll figure it out.

4.  Bring Tylenol or Motrin.
There’s nothin’ worse than getting a headache during a 3 hour long baseball game, and until the kids are about 12 years old the games drag on for hours with all the fouls and walks since none of them can pitch or catch or hit very well yet (as I believe I’ve mentioned several times already).  And then with all the crappy food, and holding in your pee for 3+ hours, you just may find yourself with a hell of a headache.  So bring your drug of choice for that.

5.  Bring blankets and wear lots of layers.
In the early spring season, the temperature can careen from 40 degrees to 70 degrees in the span of one game (remember, they start really early in the morning and then as I’ve said can last for about 3 hours).  So it’s important to layer up — bring gloves, a hat, several thermal layers and a nice thick warm blanket.

6.  Bring a canvas portable tent in the summer.
Remember what I said about the cold weather in the early spring?  Well, fast forward a couple of months and think about what it’s like in the dead of the summer when you’re playing at 2:00 in the afternoon on a nice hot, New Jersey summer day with the heat rising into the high 90’s and the humidity at about 95%.  Oh yeah. You need to get yourself one of those $150 portable canvas tents to set up over the bleachers to block the direct rays of the sun so that you don’t die from heat exhaustion. But on a positive note, at least you won’t have to use the port-a-john ’cause you’ll be sweating all the water and coffee out from the humidity. And now here’s the part where I’m going to get all maudlin on you. So be forewarned.

7.And then, there are the times when your team wins the Little League championship.
And your husband (the coach) is the proudest man in the world and you’re the proudest mom/wife in the world because of what that freakin’ adorable team of 10 and 11 year old boys and your husband have accomplished.  And you and all the other moms are jumping up and down, screaming your bloody heads off because your team actually won the Championships and you’re amazed and stunned and so damn happy and excited! 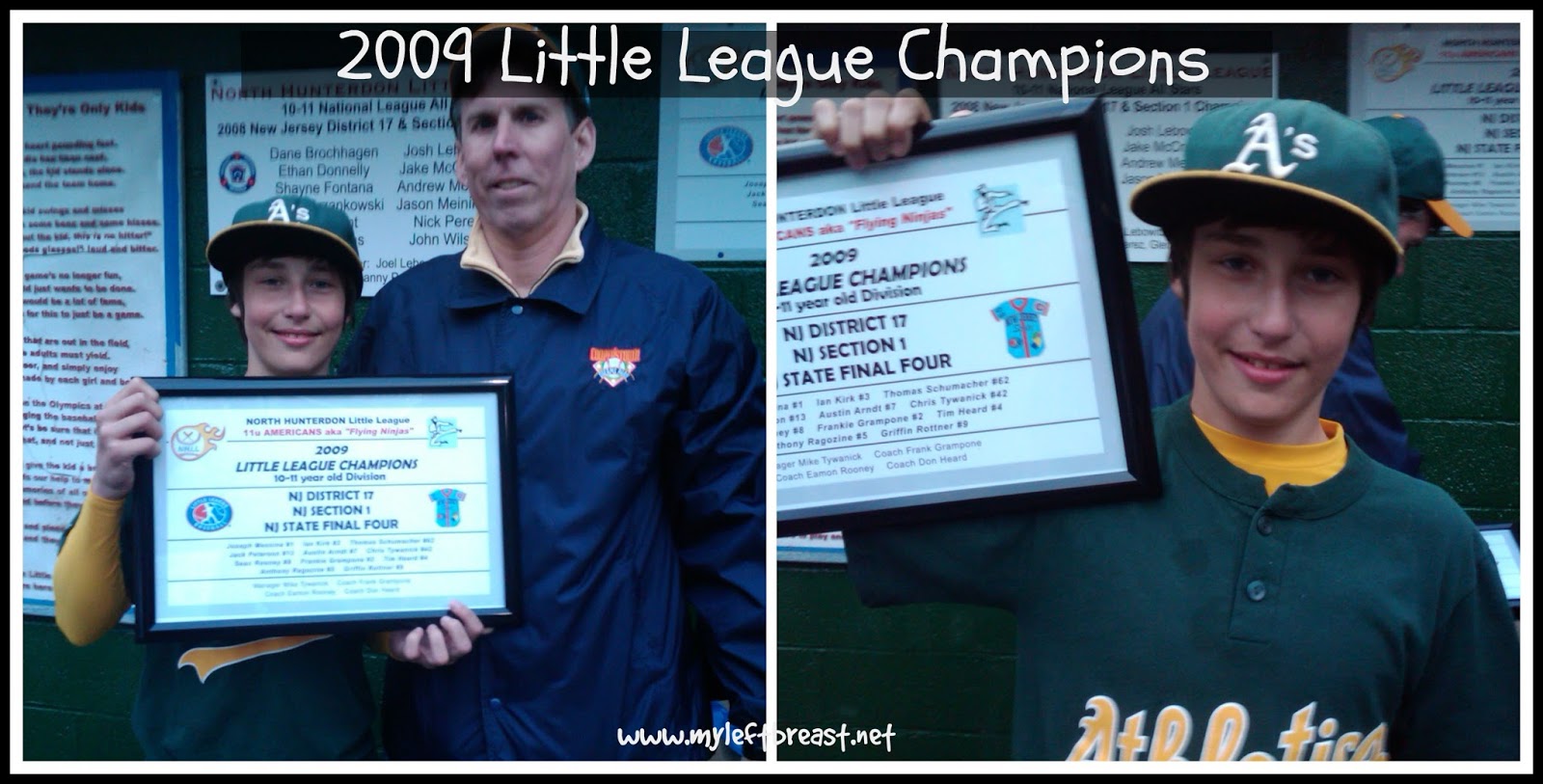 And you’re thinking how lucky you are to have a husband who will spend 20+ hours a week all spring, summer and fall every year, volunteering to coach his son’s team and then ultimately win the Little League championship which the two of them and all those other little boys will never, ever forget.  And feeling guilty that you’ve been so annoyed at how much time he spent on baseball all year, because now you get it and are as hooked on it as he is.

8.  And be prepared to become friends with some of the nicest parents you’ll ever meet.

And meet some of the most adorable kids you’ll ever have the privilege to know.  And some of them will become lifelong family friends.

Friends who will help you out during all sorts of things (like the summer they all rallied to support me through my breast cancer treatments) without a question and who will treat you like family and hold your hand through one of the toughest years of your life.

Friends who will make your family dinners and put up one of those aforementioned tents for every game because you weren’t supposed to get sun on you during all the chemo, and they never said a word, but just beckoned you over to sit under the tent ’cause they knew you needed some shade.

And made sure your son got taken care of and had a lot of sleep-overs that summer because his mom was so out of it and sick with chemo for most of it.  And just generally, took care of us and nurtured me and made me feel like a human being during all the horrible chemo when I was bald as a cue-ball under my baseball hat and sick as a dog.


Last weekend was one of the first games of the high school baseball season and I saw some of my baseball mom friends and had a flashback to that summer of 2010.  Somehow the game of baseball will always be tied up with that interminable summer of chemotherapy  in my head.

And…..so I guess you can see why I have that whole Baseball love/hate dichotomy thing going on there, eh?

Read more from Claudia Schmidt on her blog, My Left Breast

The world of social media and social networking is ever changing. While Facebook is making it more difficult over time to promote ourselves...