CrossFit has become a very popular fitness option in the past couple of years.  Friends at work and online liked it… a lot.  With all that enthusiasm, I wanted to give it a try and bought a Groupon to a nearby “box”.

For those that haven’t been initiated into the CrossFit language (which is everybody that hasn’t attended a class I think) a box is just the location.  I’d call it a gym.  I went to the intro session and decided this is not the fitness routine for me. 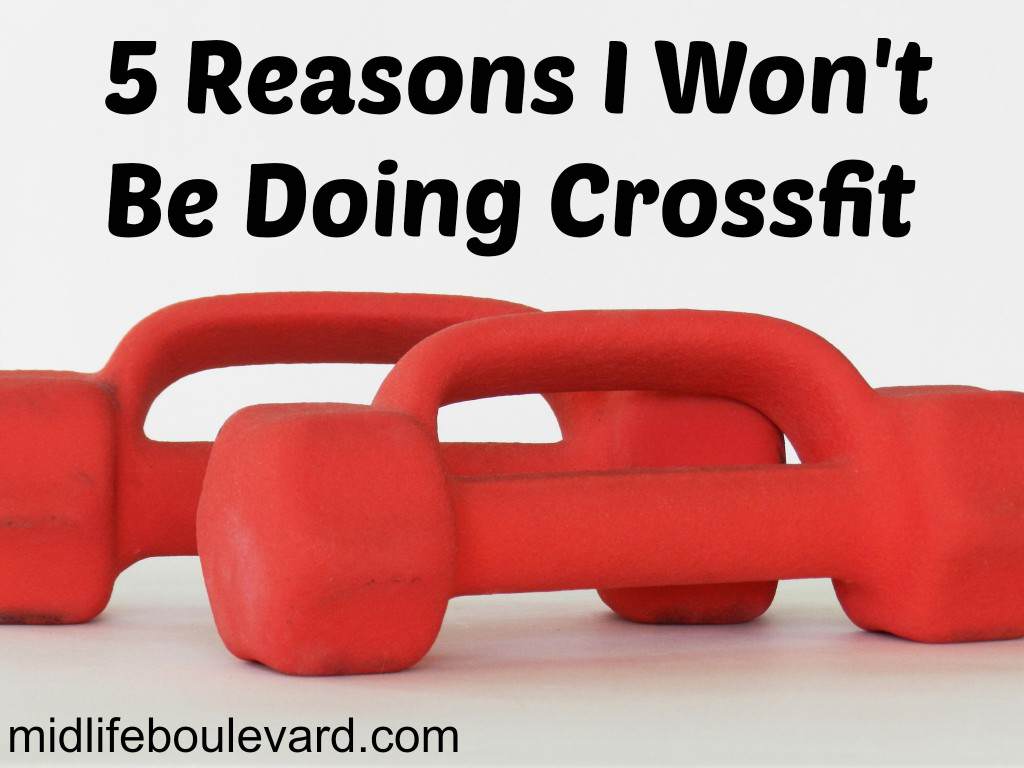 The box I went to was in an office park where the space was very utilitarian.  It was a big plain room with the whiteboards on one wall and various exercise “props” around the outer edges.

It felt like I walked into a dungeon.  I don’t know what I was expecting but it wasn’t such a bare-bones and yes, masculine place.  There were two small one-toilet restrooms and not even a water fountain although they did conveniently sell bottled water.

My goal is to get fit.  Not lift 300 pounds or do so many reps as quick as possible.  It feels like a competition when you’re doing the same workout as others but all trying to be the best.

Don’t get me wrong; I do like to increase weights or time with my chosen workout but not have it so in my face I guess.  I don’t need to keep a log of each and every workout to know I’m getting stronger.

You know I love Pilates but one of  my concerns with it being a regular part of my fitness plan is the price.  Well, CrossFit blows the price out of the water.  Average monthly fees in my area are $125 a month.  I’ve read online where monthly fees are up to $300 a month.

For that you can attend unlimited classes but I wouldn’t attend more than 3 times a week.

A friend who loves CrossFit told me I’d be beat up the first couple of weeks.  Really?  I don’t want to pay to be beat-up.  I can tell you that after the intro session I felt like I did after trying the 30 Day Shred DVD!

Sitting down to pee was painful for a couple of days.  I don’t even know how people  CAN do it two days in a row.

The instructor told me my hands would become callused from the weights and doing pull-ups.  Nope, not for me.

Have you heard about the CrossFit cult?  That is what some call it while crossfitters call it a community.  Whatever your term, I don’t want to become close friends with the other people attending my fitness classes just because we do the same workout.

Members are encouraged to join the Facebook community in addition to socializing together for nights out at a movie, dinners, fundraisers, etc.  This is on top of  their own language and a common diet.

Oh, I didn’t talk about the diet . At the first session I was encouraged to switch to a Paleo diet.  Really?  He didn’t know anything about my nutritional history but I should switch to Paleo based on what?

The thought of going back stressed me out to the point I knew it’s not for me. If you tried CrossFit, why do you love it or hate it?

Kay Lynn Akers is a long-distance grandmother who lives in Southern California with her husband and pets after their five adult child fled the state. Her day job in at a technology company but she never lost interest in writing. After serving as the newspaper editor in high school and a community newspaper journalist in college, Kay Lynn didn't publish again until she found blogging in 2009. Her current blogs are <a href="http://twosavvysisters.com">Two Savvy Sisters </a>/(co-founded with one of her sisters) which is a frugal living site and <a href="http://weightchronicles.com">Weight Chronicles</a> which is about wellness and health. Instagram: weightchronicles

Kay Lynn Akers is a long-distance grandmother who lives in Southern California with her husband and pets after their five adult child fled the state. Her day job in at a technology company but she never lost interest in writing. After serving as the newspaper editor in high school and a community newspaper journalist in college, Kay Lynn didn't publish again until she found blogging in 2009. Her current blogs are Two Savvy Sisters /(co-founded with one of her sisters) which is a frugal living site and Weight Chronicles which is about wellness and health. Instagram: weightchronicles

I tried CF... once. I won't be back, mainly for the same reasons you mentioned. I'm not ready for a fitness craze to take over my life.

I've always wondered about cross-fit. I wonder no more. And you won't find me there, either! :)

I did Cross Fit for a couple of months until my schedule changed and it became too difficult to go. It is hard work, but I felt great. I was the heaviest person there, so it was a bit frustrating trying to keep up with all the athletes, but I had a good coach. While I was making progress, it felt like I'd never be able to do a pull-up. I have friends who love it and look incredible. I agree with Melissa. If it works for you, keep it up. If not, try something else.

I love Crossfit too. I tried to get fit as well and I tried Yoga, Pilates, Zumba. Sadly, I don't get any visible results at all. I tried HIIT jogging, I did slim down a bit however jogging is kinda boring for me.

As I get to know crossfit, I was scared at the first place. The barbell, the high intensity, the environment (I am from Malaysia, not at some advance city compare to the states. I can bet that my "box" facility is worse than yours).

After my first free trial, I love it and join as member. I did get minor INJURY because of my own mistake and improper form. However, the coach corrected me and improved me, I got better. The community in Crossfit is awesome, their support and cheers keep me going. I tried my best to do as many reps as I can, lift heavy with assist and support, not because it's COMPETITIVE but I want to reach my goal by challenging MYSELF. I know that I will have to work HARD and MORE to able to get fit. Not by just sitting my ass on the chair the entire day doing NOTHING(I work in IT company too)

In short, If you don't want to be part of crossfit community or be part of the diet, then DON'T. For me, I am not the talkative or social people at my "box" however we share the same goal of fitness and I am proud to workout with them. There are few "midlife" folks are regular member at my "box" and they love it as well.

I have been in Crossfit for one year, many have inquiry about how I can be fit and toner. Anyway, it's your choice of letting go crossfit. You missed the fun. Cheers

I love CF! I tried Kickboxing, Belly Dance, Zumba, Step and Bootcamp. Crossfit is the first place that has measurable progress. I have been going to Yoga for over 4 years and I have never once had a dinner invite with another member. CrossFit does have a community atmosphere. You are invited to get togethers. If I am spending 4 hours a week at a facility, I want to get to know the people that are there.

When my mom was nine, her best friend Bona Lockwood gave her a panda for Christmas. Mom named the bear...