Karen Gordon, a romance writer, plans on seeing 50 Shades of Grey – and for 5 good reasons. Read more from Karen on her blog, Joie De Mid Vivre. 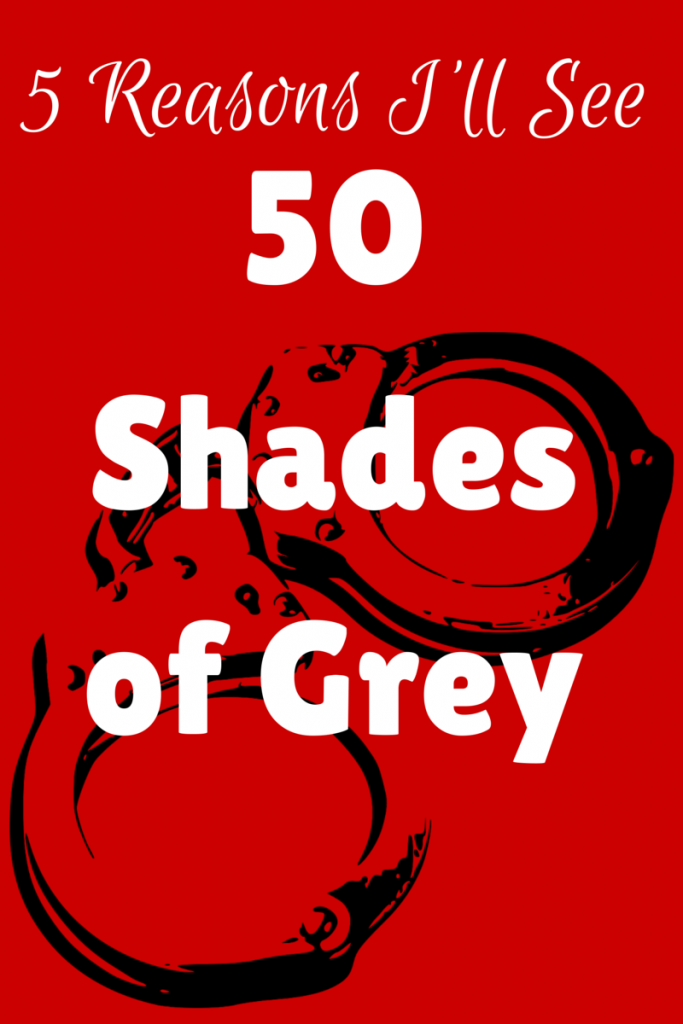 I didn’t feel the need to tell the world that I will be going to see it, with a date, and plan on enjoying the hell out of an interesting love story featuring two beautiful people, a great soundtrack and some beautiful scenery. But the level of crazy already surrounding this movie has me wanting to at least throw my perspective as a romance writer into the mix.

Before I explain why you might want to see it, let me add a few disclaimers. This film is based on books which are not great literature. Public success and great writing often have an inverse relationship, especially when it comes to writing about sex. The film isn’t a how-to primer on BDSM. If you read a book about that topic you would see that E.L. James did some research, but she barely touches on this complex, widely-varied sexual community. It also isn’t supporting the abuse of women. The main female character is a willing, albeit naive, participant. It’s really a pretty simple story with no political or instructional agenda.

So, why dedicate another blog post to it? Why am I going to see it?

1. It’s a love story–a sexy love story, something we are so sadly lacking in America. I love to go to the movies and I can’t tell you how many times I have had the time and desire only to find that my choices are either Hot Tub Time Machine 2 or more death and gore in two hours than I want to see in a lifetime. Reading a book or seeing a movie is all about how it makes you feel. Personally, I want to feel sexy rather than moronic or grossed out.

2. I like that these books and this film are at least opening up a dialogue about different types of sexuality. The BIG news that emerged from these books is that not everyone likes their sex the same way. Reading about it and learning doesn’t equate with signing up and joining in. Half the stuff on social media is misinformed or childish, but at least we are talking. And it has couples talking and possibly admitting that they might want more than decades of rote sex with each other.

3. The movie might lead to more couples having more sex and I can’t see that as a bad thing. I am all for women and couples finding the books or movies that turn them both on. It can’t be repeated enough that the way to turn a woman on is through her brain. We need to think sexy thoughts, a lot of them, in order to push the massive, running to-do list that we all carry in the front-and-center position in our brains. Two hours of beautiful people talking and acting sexy just might do the trick.

4. If this movie does well in theaters, then we might get more sexy love stories in the future. I like the idea of us being a more sexy and less violent nation. I would love to see a steady stream of different types of love stories pouring out of Hollywood. (And a steady stream of writers getting big, fat checks for their romance novels being made into movies. Self-serving, but true.)

5. This is sexy done for women by women in a big budget movie. I teach a film class, so I can say with authority that Hollywood has not often been open to the idea that women are sexual beings and not just the reluctant or exploited objects of male lust. The female lead character in this film may seem to be an innocent led astray, but the outcome of this romantic tug-of-war for power says otherwise.

So there it is, my two cents worth. And as I do with all my blog posts I will now tweet, post and pin it; hoping to add a slightly authoritative (or at least well thought out) voice into all that crazy.

Join me and add your two cents and comment. Will you see the movie? In theaters or at home? Did you read the books? Are you ready for more sexy and fewer violent films?

My girlfriends and I all bought advance tickets for Sunday night! There will be 8 of us and we plan on having some drinks and enjoying a Girls Night Out. We all read the books and agreed that while it was terrible as far as literature goes, it WAS a reason for us to talk more openly about some of the things in the books. It led to some pretty interesting discussions, an "adult toy" party, and some general education that spiced up some bedrooms. I think all of our significant others will be watching the clocks for us to get home Sunday night!

Okay, this actually sounds like a fun way to go to the movie. I don't think my local girlfriends would be up for this, and my trashy-movie buddy movie to where you are!

Disclosure: this is a sponsored post from UPromise. Money is still one of the most taboo topics. I know quite...