Can you relate to hearing noises at night after watching a scary movie? Laurie Stone shares her experience with us below – and can be found over at Musings, Rants and Scribbles talking about lots more! 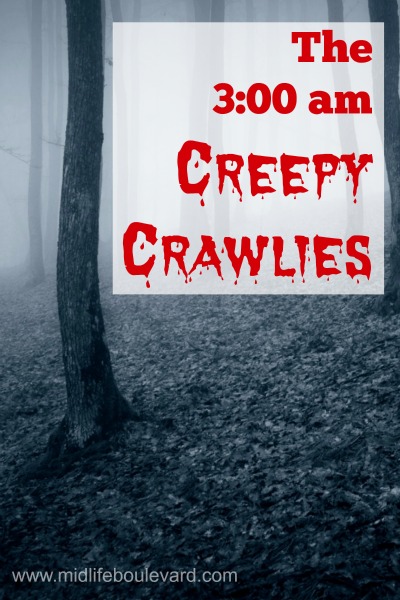 Ever know you shouldn’t do something, but do it anyway? This happened to me recently when I happened to walk by my son watching a spooky movie about a possessed, haunted doll. I knew not to sit down. I knew I’d remember that doll’s evil black eyes. Or the way she could make her rocking chair move at odd times or the sewing machine go off at 4:00 a.m. But did I listen? No. And yes, I paid the price.

Did I mention I’m horrible at thrillers? I watched The Shining and The Sixth Sense with a pillow over my face the entire film, peeking out when it felt safe, traumatized when it wasn’t. I’m the embarrassing one who screams out loud at those “gotcha” moments. I’ve never seen one of these movies in a theater for a good reason. I’m disruptive. They’d probably kick me out.

But that’s not the worst part. The worst part is what happens later. In the wee hours of the night.

I get the creepy crawlies. I wrote on this once before in a post about the show, Long Island Medium. One viewing was enough. I’ll never watch Theresa Caputo hobnob with the dead again. I’m not good with this stuff.

The night of the weird doll movie I fell asleep fine, but around 3:00 my eyes opened and the hamster wheel began turning (by the way, a rusty, spooky hamster wheel). An array of disturbing images started competing like barkers at a scary carnival. “Worry over loved ones here!” “Horrible diseases at this booth!” “Get your fire, plane crashes and earthquakes!” I ended up pulling the covers over my head like a six-year-old.

Some people call 3:00 a.m. the Witching Hour, the time when supernatural forces are strongest. Human brains go from daytime rational to nighttime primal. Fears magnify. We become childlike, vulnerable and scared. That night I could’ve sworn I heard the furious thrum of a sewing machine… even though we don’t own one.

I know people who watch crime shows every night and sleep like babies. I envy them, but I’ve heard there’s a biological basis for all this. Apparently scaredy-cat introverts (like me) react stronger to stimuli — physically and emotionally. It doesn’t take much to tax our already over-charged nervous systems. Extroverts are chill. They don’t sweat the small stuff. Lucky them.

So what’s a faint-hearted girl to do? Don’t look, as my father would say when I was little and freaking out over such classic horror films as Bambi and Dumbo. Stay away from whatever fills your already-burgeoning imagination. Avoid crime dramas, scary flicks, nightly news, and anything about the Long Island dead. Fine, I thought. No problem.

Except once in a while I slip. I peek into that other world, the eerie world, the world of icky stuff everyone seems to love. The world where strange dolls manipulate inanimate objects, like stereos that play slow, creepy tunes late at night… during a thunder storm… when the husband’s away… and the wife’s alone… and of course she has no car… and her bedroom door’s starting to creak slowly open… that’s it. Goose bumps are starting. Damn. I did it again.

Does anyone else get the creepy crawlies or is it just me?

Gilly, I was traumatized by the Sixth Sense, especially that tent scene! As for the Exorcist, I just hear that creepy movie score and I'm reaching for the remote. So glad I'm not the only one with a too-active imagination. Looney tunes is a good description!

No - not just you! I STILL think of the worst scenes from the Exorcist at 3am and I haven't seen it since it came out a million years ago! Regan's head turning with that demonic look on her monstrous face is etched in my brain forever. Quite why it pops up at 3am when all I want is a wee I will never know. Another thing that haunts me in the early hours is the scene in Sixth Sense where he gets up in the night to have wee and is scared to death by 'people' flitting past when he dives back into the little tent he made. OMG can't cope with that image!The other night, I was reading a very creepy description in a novel that I stayed up to read (in bed). I didn't realise the heating had come on for the first time this autumn and wasn't used to all the subtle creaking sounds from radiators. So the sounds coming from downstairs all became entwined with the story and I couldn't put the light out when I finished reading! So no - definitely not just you. I guess there are lots of us looney tunes out here!

Ghosting is Only Cool at Halloween

You’ve been dating someone for a few weeks, a few months, a few years. You like this person, and you’re pretty...