Now that summer is well and truly over, those beach reads seem fluffy and mindless – because they’re supposed to be. You’ll be ready for some meaty, thoughtful reading. Here are 20 books for autumn from established authors and first-timers that look especially interesting! If you didn’t catch them before, now is your opportunity to catch up.

Please note that all links are affiliate links. Click and buy from Amazon, and Midlife Boulevard receives a small share of the sale. 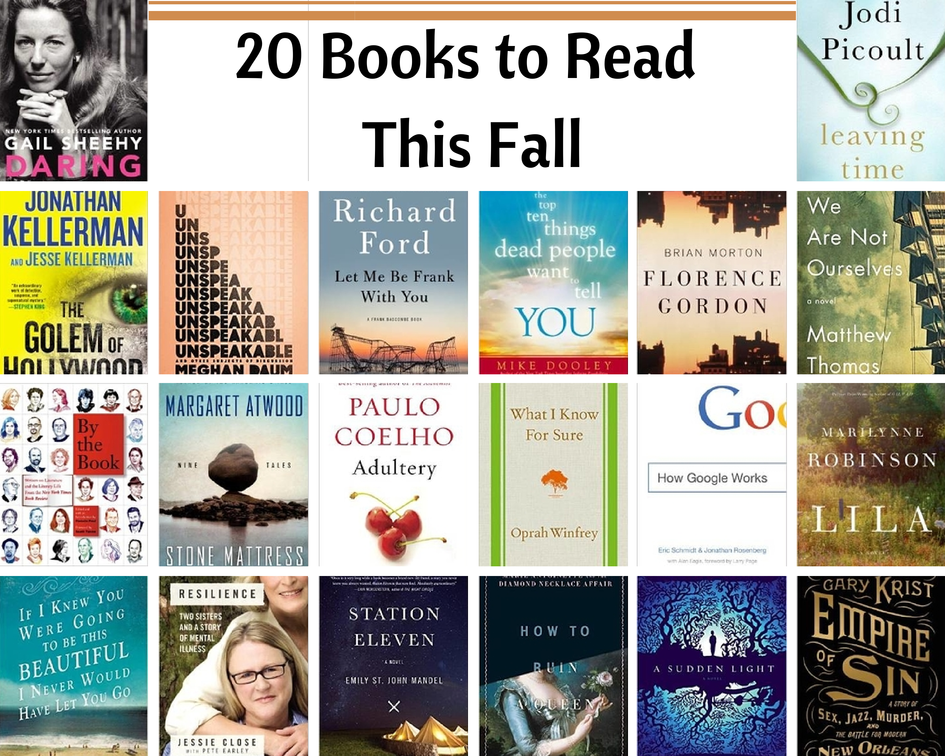 A Sudden Light by Garth Stein
From the bestselling author of The Art of Racing in the Rain. A novel in which a boy trying to save his parents’ marriage uncovers a vast legacy of family secrets. September 30

Adultery: A Novel by Paulo Coelho
A woman tries to overcome midlife discontent by rediscovering herself in a passionate relationship with a man who had been a friend in her youth.
August 19

Florence Gordon by Brian Morton
Highly anticipated, this book is about a woman who has lived life on her own terms for seventy-five defiant years, only to find herself suddenly thrust to the center of her family’s various troubles.
September 23

The Golem of Hollywood by Jonathan and Jesse Kellerman
From blockbuster author Jonathan Kellerman and his son Jesse comes a suspenseful book of mystery, the supernatural and Hollywood.
September 16

If I Knew You Were Going to Be This Beautiful I Never  Would Have Let You Go  by Judy Chicurel
This debut takes us back to the summer of 1972. A coming of age story of conflict on many levels.
October 30

Leaving Time by Jodi Picoult
Another page-turner from the wildly successful Picoult about a woman searching for the mother who abandoned her.
October 14

Let Me Be Frank With You by Richard Ford
Ford’s familiar protagonist, Richard Bascombe, returns in this book about the aftermath of Hurricane Sandy.
November 4

Lila by Marilynne Robinson
The Pulitzer Prize winning author’s new book about a young woman and her minister husband promises to be another winner.
October 7

Station Eleven by Emily St. John Mandel
A futuristic novel about the end of civilization and Hollywood.
September 9

Stone Mattress – 9 Tales by Margaret Atwood
Atwood’s newest is a collection of stories. Not to be missed.
September 16

We Are Not Ourselves by Matthew Thomas
This sprawling debut about an Irish family in the early 2oth century has gotten rave reviews.
August 19

Daring: My Passages – a memoir by Gail Sheehy
From “girl” journalist to best selling author of the iconic Passages comes this memoir.
September 2

Resilience: Two Sisters and a Story of Mental Illness  by Jessie Close and Pete Early
Jessie Close, sister of actress Glenn Close, tells her story of a childhood spent in a cult and her severe bipolar disorder.
January 5, 2015 (post-Fall)

What I Know for Sure by Oprah Winfrey
Anyone who reads Oprah magazine is familiar with her “What I know for sure” essays. Now they’re compiled in a book.
September 2

By the Book: Writers on Literature and the Literary Life from The New York Times Book Review edited by Pamela Paul, foreword by Scott Turow
Honest and unguarded interviews with 65 authors.
October 28

Empire of Sin: A Story of Sex, Jazz, Murder, and the Battle for Modern New Orleans by Gary Krist
A history of New Orleans in the early 20th century.
October 28

How Google Works by Eric Schmidt and Jonathan Rosenberg
Written by the Chairman and a former executive of Google, this book offers insights into how the company works and how technology has changed our lives.
September 23

The Top Ten Things Dead People Want to Tell YOU by Mike Dooley
What do the dead want you to know? Among other things, life is truly fair.
October 21

The Unspeakable: and Other Subjects of Discussion by Meghan Daum
Meghan Daum is a master of the personal essay, along the lines of Nora Ephron and Joan Didion. (You should read her books – Sharon)
November 18

Thanks for the list of new books to get excited about this fall. Just finishing my last summer read of "The Vacationers." It's pretty good so far.

Thank you for doing the leg work! This is a great list!

Thanks for the heads up. There are a couple here from favorite authors Jodi Picoult and Garth Stein, that I am really looking forward to, plus a couple of the newer ones (Lila and Frances Gordon). Now, if I can just finish my summer list....

Those first two non-fiction titles sure caught my eye. So many books, so little time. One of the distinct problems with ageing -- my book list lengthens as my path to old age shortens.

Thanks for these recos...I am determined not to become a Netflix zombie again this fall!