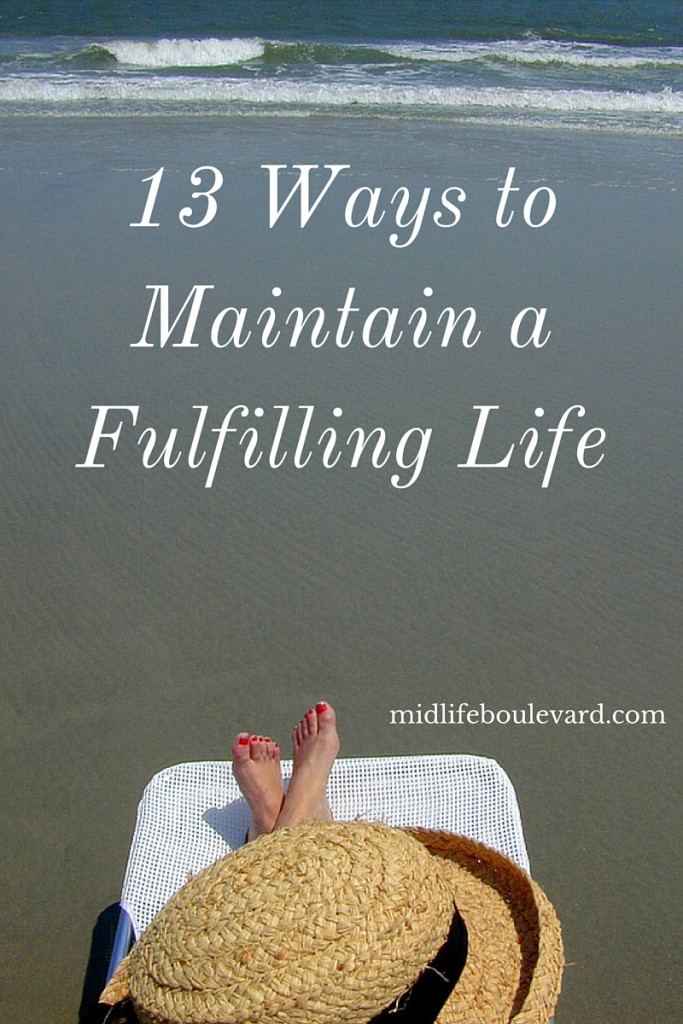 Ali Davies can be found sharing regularly at her website of the same name. This post was originally featured there.

There are many things that contribute to creating a fulfilling life at midlife and beyond. Of the most important factors the habits that you maintain fall at the top of the list. So, if you would like to increase levels of fulfillment in your life, it is well worth taking some time to work out what habits you could create to do that.

To help you get started, I’ve listed some of the top habits of people who have a fulfilling life, at midlife and beyond.

1. They don’t buy into the negative social conditioning and stereotyping of what the rest of the world dictates life at midlife and beyond should be like. They instead decide for themselves how they want this stage of life to be and find ways to make it so.

2. They have created their own definition of success based on their values and what is most important to them and are building every area of their life around that.

3. They don’t allow themselves to get knocked off track by setbacks, challenges or things going wrong. They accept that it’s all part of creating a fulfilling life.

4. They don’t do drama, and they don’t engage in other people’s drama. Drama is such an energy drain, whether it is your own or someone else’s. Fulfilled people don’t have time for that sort of nonsense.

5. They don’t settle for mediocrity. If their life isn’t the way that they want it, they don’t just settle for it. They get off their arse and do something about it. Fulfilled people don’t wallow in pity parties!

6. They surround themselves with positive, can-do, constructive people. On the flip side, they protect themselves from energy draining and toxic people.

7. They have strong personal boundaries that protect the fulfilling life they have created.

8. They look after themselves. It is very difficult to feel fulfilled if you are always feeling like crap. Fulfilled people prioritize their health and well-being.

9. They don’t compare themselves or their lives to those of other people. They focus on their own lives and how they want things to be.

11. They don’t take themselves or life too seriously.

12. They don’t define themselves by their age. They know age has nothing to do with the possibility of living quite the deeply fulfilling life.

13. They get that fulfillment lies in simplicity. Their lives are often built around simplicity as a core value.

So, would you care to share — which of these habits would you benefit from creating?

Ali Davies helps people create change to design the life and results they really want. You can find out more about Ali and her work at www.alidavies.com

Ali Davies helps people create change to design the life and results they really want. You can find out more about Ali and her work at www.alidavies.com

Love this list, Ali. It's so motivating and inspiring. Thank you for sharing it with us here. I appreciate it, and I just wanted to let you know that.

Andrea, thanks for your kind words. So glad you found it motivating and inspiring.

So true. Great philosophy to live by!

Hi Delia, these things really do make a big difference.

Great list, Ali! I have found all of it to be true. Good job!

Hi Pam, glad you enjoyed it.

Love this and certainly needed it today!!! Thanks for the reminders and the joy! :) Hope this week is treating you well. Off to share!!!

Love this inspirational list, Ali! Printing & taping to my bathroom mirror for a daily reminder.

Thank you Lisa. I am delighted you found it inspiring.

Story Sharing: Is It Gossip or Concern?

You can find Pennie sharing regularly at The Accidental Blogger. Find more from Pennie on friendships and relationships here at...