A good marriage is where both people feel like they’re getting the better end of the deal ―Anne Lamott, Joe Jones 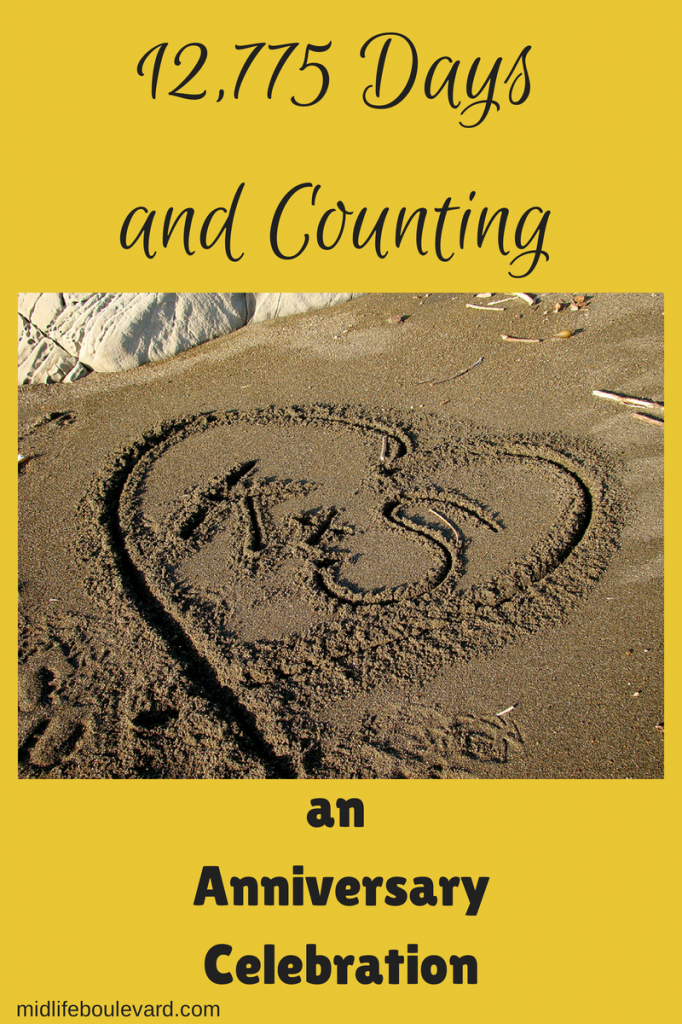 We committed ourselves to each other for our entire up-and-down, peaks-and-valleys, in-sickness-and-in-health, for-better-or-for-worse life. We believed we knew what we were getting into, and we were partially right. We weren’t wrong. It’s just that there’s been so much more. Like I said, we were young. We thought “old” was 32 and 34.

This is how little we knew about real life. We hyphenated our names. Both of us. Yeah, that was kind of a silly decision. The marriage though, that’s worked out quite nicely.

It was just the two of us for ten years. Then we had Kate, and six years later, Alexandra. The four of us for 24 years, and now it’s just the two of us again. Our quarter century of parenting together has been remarkable, and I have always been grateful to have him as my partner. There was the time he was away and I was so exhausted I fed the girls refrigerated cookie dough for dinner, but as long as he doesn’t know, we’re all good.

We also own a design and marketing studio together. That’s been a little trickier, but it’s also held us together, with the same goals and challenges, the same path. Sometimes I feel like a marriage shouldn’t have to withstand so much pressure, with deadlines, hiring, firing, making coffee and the judgment calls that show up every day between 9 and 5. Our careers have been entwined, which has made individual movement challenging (sometimes impossible), but it’s nothing a little counseling and creativity couldn’t overcome. I want to work with the best and the best just happens to be my husband.

There were years when it didn’t feel blissful or romantic, but there were always enough moments of connection that we made it through. Sometimes they were very small moments, but they showed up exactly when we needed them. There’s a lot to do when you’re raising a family, growing a business, navigating a few recessions, striving to maintain a sense of independence, remind yourself that you’re an artist and a writer, be healthy, and be present. Something has to give, and once in a while it was us. That’s just the truth of it. But in between all of that, it’s been fun. He makes me laugh, and I am always delighted when I can make him laugh. He’s always up for an adventure and has a few more waiting for us.

A while back I said, “You know, I think I’m going to like growing old with you.” Steve said, “Sorry to break it to you, but we’re already old… it’s not going, it’s doing.”

I am still learning things about him. Just last week he told me that in Little League his positions were pitcher and first base. How did I not know that? And how did I not know the tremendous passion he has for gardening? Or that he would willingly wear orange, green and purple striped shorts…to work? By the way, it’s a good look.

I do know that our relationship has provided me with stability and strength, and the inspiration to explore where I can go, what I can do, and how I can create. Almost everything big in my life, I have done with Steve by my side. And if he wasn’t by my side, he was on the sidelines, taking care of our home and the studio, so I could continue my journey. He’s smart and sexy and kind. He’s an amazing father and an awesome son. He makes people feel comfortable and secure. He’s patient and balanced. He knows how to fix things, and he can draw anything. Also, he has great legs and he’s a really good kisser.

Someday he will probably be pushing my wheelchair. Hopefully that’s 35 years from now. We’ll look back at this time and think, “What did we know? We were in our fifties, we were just children.” But we’ll know we were lucky, and that lifelong love is worth the work.

For now, I’ll count the days, and my blessings.

Kim Tackett blogs at <a href="//fiftyfiftyvision.com">Fifty Fifty Vision</a>. She’s 56 and is a proud and enthusiastic Northern Californian, living in Davis, where she is powered by coffee, new projects, travels, and her family, which includes her husband Steve, and her two fiercely independent daughters (ages 26 and 20) who are carving their own paths far away from home. This is handy, as Kim is an emerging writer who is diving deep into the midlife ecosystem. Kim is a marketing consultant at the company she owns with Steve, <a href="//www.tbdesign.com">Tackett+Barbaria</a>. When she can steal a moment, she’s wandering, writing, and figuring out what’s next.

Kim Tackett blogs at Fifty Fifty Vision. She’s 56 and is a proud and enthusiastic Northern Californian, living in Davis, where she is powered by coffee, new projects, travels, and her family, which includes her husband Steve, and her two fiercely independent daughters (ages 26 and 20) who are carving their own paths far away from home. This is handy, as Kim is an emerging writer who is diving deep into the midlife ecosystem. Kim is a marketing consultant at the company she owns with Steve, Tackett+Barbaria. When she can steal a moment, she’s wandering, writing, and figuring out what’s next.

What an inspiring and incredibly beautiful post. My husband and I married when we were 19 and we will be married 30 years this December. Marriage is such a journey and reading the love, respect, and appreciation you have for each other is beautiful. Many, many more years of happiness together!

Congratulations of 35 years of marriage! I too have been blessed in that area. I will celebrate 23 years next month. It is amazing when it's right and that is what we both ended up with. Life has been so much better because of who we married. It's never perfect but it's ours and that's all that matters! Here's to another 35 for you!!!!

Lovely post. Even though I was 29 when I got married, 25 (and 1/2!) years later my husband and I discuss how you never know how your partner is going to evolve and grow and change. How lucky we are that we're doing it together, supporting each other no matter what comes our way. Because we are best friends, just like you and your husband, Kim.

Working together is an additional challenge and you two were triumphant! Thirty five years, two lovely daughters and you are still smiling and laughing with each other. That is how I define success.