Everyone’s favorite fixer Olivia Pope (Kerry Washington) returns this Thursday, September 25 for the Season 4 premiere of Scandal. The last time we saw Olivia she was boarding a private jet with former B613 commander Jake (Scott Foley) heading for….who knows where? 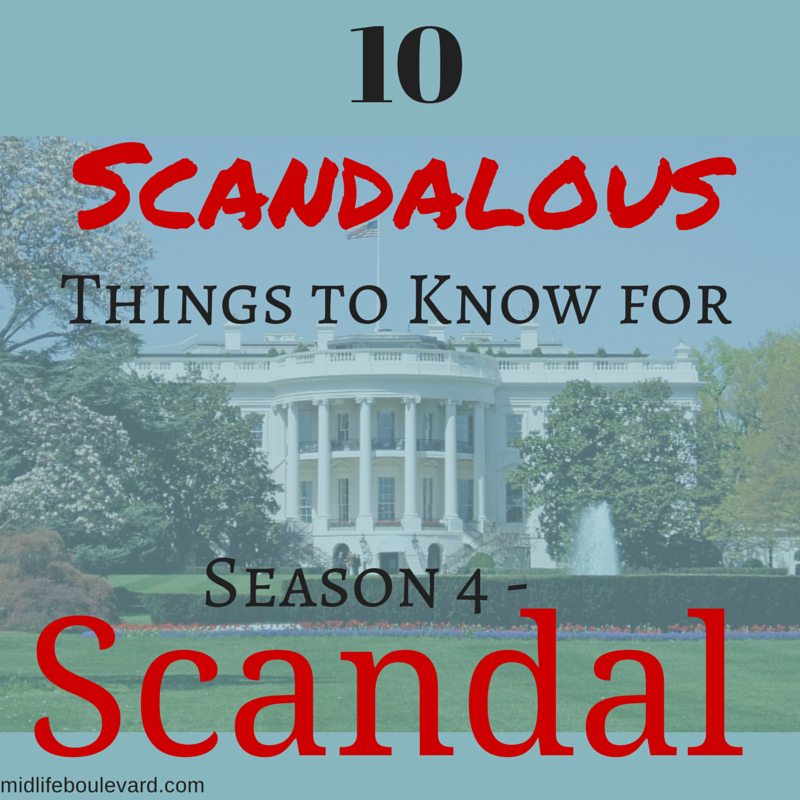 Here are a few things to ponder while we wait for Thursday night’s show and finally get the answer to the question:

1. It doesn’t look like Fitz (Tony Goldwyn) and Olivia are any closer to their dream of moving to Vermont to make jam (her), be the mayor (him), and make babies (both of them, obvi). Such a waste of a beautiful country home.

2. In the “ewwww” category is Huck (Guillermo Diaz) and Quinn (Katie Lowes).  Huck and Quinn??? Aren’t they like brother and sister, kind of? They need to stop their monkey business right away. Also, the family reunion between Huck and his wife and son is sure to be interesting.

3. Olivia’s mother Maya Pope (Khandi Alexander), certainly the most evil woman ever on a television show, is now in a hole in the ground where both Jake and Huck spent a lot of time, thanks to the reinstated head of B613, Eli Pope (Emmy® winner Joe Morton), who is also her husband. It’s going to be fun when she gets out, don’t you think?

4. Fitz finally found out that his father raped Mellie (Bellamy Young), which, more or less, ruined their marriage when she withdrew from Fitz out of fear of spilling the beans. This, on top of the death of his son, seems to have broken Fitz, despite the fact that he won the election. He needs Olivia to fix him, big time. But…where IS she???

5. Harrison will be gone when the show returns. Remember, Eli Pope had a gun pointed at his head at the end of the season 3 finale. How will this impact Pope and Associates? And what will happen when Olivia returns?

6. David Rosen (Joshua Malina) has all of the B613 files that Jake gave him. Is that a death sentence for David or a chance for him to finally be the hero he wants to be? And will he and Abby (Darby Stanchfield) continue their big romance?

7. Vice President Sally Langston (Kate Burton) lost her bid to take the presidency from Fitz, even after staging a dramatic escape and acting all Florence Nightingale-ish after the bombing of the church during a funeral, a bombing that Chief-of-Staff Cyrus Beene (Jeff Perry) knew of but postponed notifying the authorities about in the hopes that Sally would die in the explosion. Because that seemed like a good idea at the time.

8. What will happen to Cyrus this season now that his husband is dead? One thing is for sure, Cyrus needs a love interest to humanize him. Otherwise he’s simply a political machine.

9. Will Mellie and the new vice president Andrew Nichols (Jon Tenney) continue their affair? It doesn’t seem right that, having finally found love, Mellie should miss out. After all, Fitz has been doing everything in his power to get together with Olivia, despite the fact (or maybe because) he’s the president of the United States and it could ruin him. Vermont is calling…

10. Most important – what kind of handbags will Olivia be carrying now that Kerry Washington has had her baby? Those big Prada bags last season were ah-maz-ing…can’t wait to see what she’s carrying now!

Season 4 of Scandal premieres Thursday, September 25 at 9:00 pm (new time) on ABC. Be sure to join in the twitter conversation during the show – it’s always entertaining!

How are huck and Quinn brother and sister? Did I miss that?

They're not- it just feels that way!

Good riddance to the domestic abuser who played Harrison. And I've been waiting to kiss Fitz for years. And Kerry Washington is so amazingly beautiful. I might like to kiss Joe Morton too. I'm so conflicted.

Oh I know - Joe Morton is such a studly guy!

What happened to the actor who played Harrison, I think he was fired, right?

Yes he was fired.

OMG the bags! I'm hoping that the Harrison character will be recast. And Quinn and Huck...no. Just no.

Will steven come back now that Harisson is gone? Or will they get us another hot guy? Lance Gross is jobless since Crisis was cancelled