Over the past several years, as society endeavors to include men in journeys previously traveled alone by women, we’ve been introduced to paternity leaves, male menopause, metrosexuals, and “mannys” that help parent our young offspring while we’re out in search of world peace (or trying to drum up this month’s rent before two parents, one manny, and a couple of toddlers end up living out of two-seater convertible).

One expression being casually tossed around, invariably by the male in the relationship, is “We’re pregnant.” Seriously, dude?? Did you gain 68 pounds in the last six months? Do you hurl whatever breakfast you managed to gag down earlier at the mere mention of raw meat? Are you going to eject a 9-pound human out of a 10-centimeter orifice while she repeatedly tells you to ‘just breathe through it’? No? Then you are not pregnant.

But on a recent trip with a couple of our best friends, I distinctly heard Kenny say, “We have Parkinson’s.” WTH?? Before I could reach over and smack him up ‘long side his head with my tremor hand, he continued. “She may be the one diagnosed, but it’s changed my life too, and nobody ever asks about that.” He was right. Five years after my diagnosis, we’d never talked about how it has affected him. Up until now, it had always been about my battles. Apparently he had his own, and was prepared to share.

He turned to face our friends, choosing to be “interviewed,” as he called it, by neutral parties, while I sat quietly in the corner with a Diet Coke and a doughnut, promising to let him speak without interrupting, overreacting, or getting all butt-hurt by something he said. So here goes. 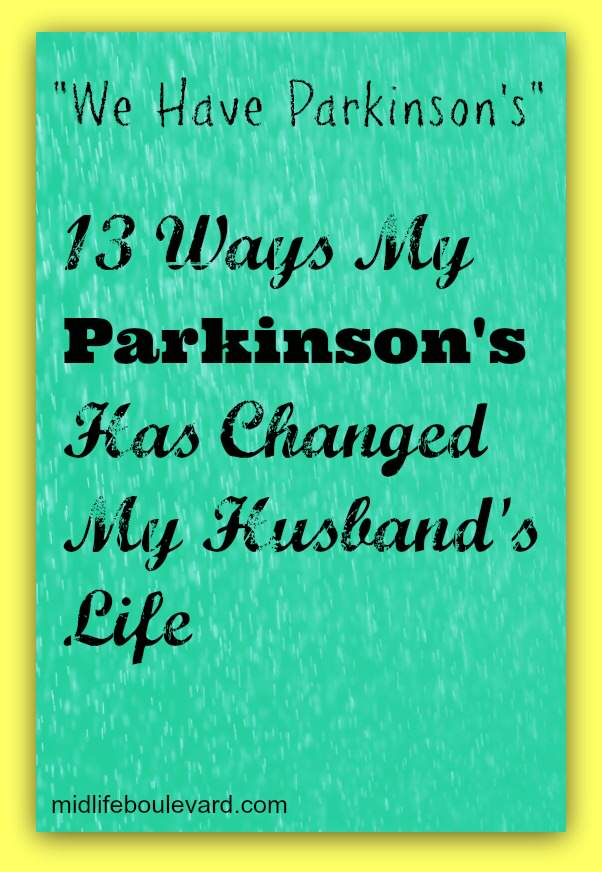 Kenny’s list of “13 Ways My Wife’s Parkinson’s Has Changed My Life.”

1. I used to leave my phone in my truck, checking messages once or twice during the day. Now it’s attached to me like a toddler harness at Disneyland. If she calls, she might be locked in the bathroom, or she’s impaled herself with a fork, or she’s offering up a pole dance (in which case, I can be home in 10).

2.  My wife is fiercely independent and a bit of a control freak. Parkinson’s has forced her to lean on other people. I’ve learned to help her when she finally asks, without a running commentary on why she didn’t call sooner or how the hell this happened in the first place.

3.  I no longer have any expectations of what I’m going to walk into at the end of the day when I get home. Kitchen fires, her stuck in a dress because she put her head through the wrong hole, or chasing the neighbor’s cat through our living room. I’m flexible.

4.  We love to dance, and do a fairly enthusiastic swing. I’ve learned not to let go of her, though, after she twirled out the open front door one time and landed on the front deck before I realized she wasn’t coming back.

5.  I research the side effects of her medications so I know what to expect. If you don’t know that tiny pill will make her as nocturnal as an alley cat, eating Lucky Charms at 3:30 in the morning because she can’t sleep, or hallucinating and pointing out people at the foot of your bed who aren’t actually there, you might start thinking she’s just snapped and now you’re married to a crazy person with Parkinson’s.

6.  Laughter is our strongest connection. Whether she’s frustrated, sad, or just pissed off at this disease, my job is to help her find the funny. If I have to hop down the hall on one foot, shaking the other one like a cat trying to dislodge dog poop off its paw, in a goofy imitation of her working through her morning foot cramps, then that’s what I’ll do.

7.  I’ve learned not to say “We already talked about this yesterday,” or “Geez, don’t you remember??” when she brings home a movie we just watched last week or needs me to repeat an entire conversation we had the night before. Constant reminders are annoying, sort of a Parkinson’s equivalent of “Are we there yet?” being repeatedly singsonged by a back seat full of 4-year-olds.

8. Her safety is an ongoing priority. We sold her Vespa because her tremor made it unstable. This year we did the same with her shotgun. As entertaining as it was to watch her wave the gun around, hitting whatever got in her path, the old guys at the shooting range were running out of places to hide when it was her turn to shoot.

9. I’ve learned that any compliment that includes “for Parkinson’s” is not going to get the response I hoped for. “You look beautiful, even with Parkinson’s,” got me rocket-launched into the guest bedroom one night, and I’ve never made that mistake again.

10. I can gauge her moods with almost 100% accuracy by her tremors. I call it her “Park-o-Meter.” Whether she’s anxious, angry, tired, or sad, she has a certain tremor for each mood. Poker players call it a “tell.” She has a warp-10 tremor that can only be handled by wine and Milk Duds, so my job is to have a stash on hand at all times.

11. I can’t leave for work in the mornings until I know what she’s wearing and if she needs help putting it on. Anything requiring something called “Spanx” is not as much fun as it sounds and is a 2-person job.

12. We’ve always taken turns getting big-ticket items we each want. One year I bought a Harley. The next year, she redecorated the house. I haven’t taken my turn since 2010. I look at her, especially when her symptoms are in high gear, and my heart breaks, so I give her my turn. This year, however, I’m getting a fishing boat. I’m probably going to hell for being a bad husband, but I’m getting a boat. (He grinned.) Really, I am.

13.  I’ve learned not to anticipate what the future will hold. Parkinson’s is different for everybody. But this didn’t just happen to her. It happened to us. If I could wave a magic wand and make it go away, of course I would. Hopefully, they’ll find a cure. But soon enough for her? Maybe, maybe not. Our other option is to find the funny and laugh about it. If I can do that, I’m giving her the best I’ve got to give. And that’s a wrap.

Now if you all will excuse me, I think I need to go hug my husband.

I just read this and I'm completely beside myself. I didn't expect to feel this way. I'm stronger than this and I can roll with the punches and deal with anything that comes my way....so I think. I guess I thought I was alone with all 13 of those points. I don't know why, because I know better. I know that Parkinson's effects every person different. I guess that's why it's recommended for me to seek therapy to help me help my husband. Number 7 is the hardest, because I feel like it's a case of not listening versus not remembering, but I guess I don't understand the disease as much as I thought I did. I know his legs are the worst part of the disease for him. The pain is excruciating. Stress is a huge trigger for his leg pain, too. I didn't expect to sit here and cry while I ramble, either, but you need to know how much this effected me and how much it helped me. My friend, who is a hospice nurse, told me that one of the most difficult jobs is being a caretaker. Because I don't suffer from the disease, I just don't see it that way. The more I see stuff like this, I begin to understand. I think I have higher expectations of myself and know I can do it, but I am beginning to realize I may need help on how to deal with what is coming up on my door step.

Oh Stephanie, I'm so sorry for your difficulties. I'm teary-eyed about your response. Caretaking is hard, and taking care of YOU is as important as taking care of Hubs. I'm releasing my book next week called "Shake, Rattle & Roll With It: Living and Laughing with Parkinson's," and I'd be happy to send you a copy, my treat. Please email me at [email protected], with your full name and mailing information.

I'm so glad you shared Kenny's list, Vikki! I love it!! As a carepartner for my husband who has had PD since the age of 17,he's 48 now, it resonates with me. Thanks to you both for sharing your personal thoughts. Best to you both :)

"we" have parkinsons too

Tears are streaming down my face right now. My husband was diagnosed with early-onset PD 2.5 years ago. I still remember trying to comprehend the words coming out of the doctor's mouth as our 3 year-old son hung onto my leg and I bounced our 1.5 year old daughter on my arms. A year of denial. A year of anger. And finally acceptance. Things have changed. And laughter has helped a lot. A LOT. We are still working on it. And, of course, just as we get used to things, they change. But we will work through it. Thank you for this article. Hugs to both.

I can't imagine how tough this has been for both of you. I love your husband's focus on finding the funny. He sounds like a great guy that compliments an amazing woman.

Loved this insight in to your world. Thanks for sharing.

Getting Married at Midlife for the First Time

Getting married for the first time at this age is a little weird. At a time when most people our...