At the start of every new television season I count up how many shows have lead actresses over 40. As you can imagine, now that The Good Wife is over, there’s not very much to count.

This spring I met Caytha Jentis and she told me about her new web series, The Other F Word. (Family. The other f-word is family.) I was happy to work with her to promote this show.

Last month the series launched a first season of eight short episodes. I devoured the whole season in a weekend afternoon. How refreshing to see a comedy based on the lives of midlife women. Kids moving out, marriages changing or coming to an end, on-line dating, going back to college–so many midlife touchstones are covered. 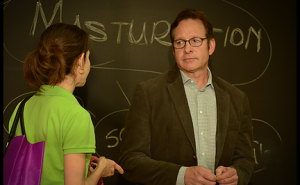 The show has a core cast of four women who cover a lot of ground with their characters. There’s the suburban mom who needs to go back to a career due to an empty nest and a changing marriage, the sexy widow not really dealing well with her grief, the Tiger Mom who can’t let go of managing the kids, and the single sister who lives in the city and dates much younger men.

Despite the four women going through major, stressful life changes, I loved that they handled the changes with humor (and maybe a glass of wine.) It feels like they can get through anything with the help of their friends, family, and a trip to the dog park. 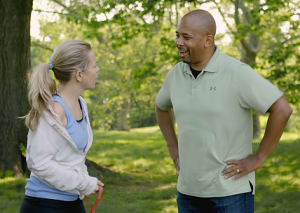 Amy meets an old friend at the dog park.

I most identified with Amy, the main character. She’s tightly wound, and missing her previous minivan-mom life now that chapter is over. Still, she’s moving out of her comfort zone (literally and figuratively) to live a new life.

About “The Other F Word” Series:

“The Other F Word,” a dramatic comedy series by award-winning filmmaker Caytha Jentis, is available free on Amazon.  The riveting new series…addresses issues like ageism, sexism, re-entering the workforce, sexuality for women 40+, dating after divorce/widowhood and more. At its heart, the series is about friendship and finding oneself after the kids are grown – an adult coming of age in mid-life.

“The Other F Word” series taps into an underserved and underappreciated demographic: women 40+.  Amazon reviewers are raving about the new series because they recognize themselves in the characters and relate to the storylines. The “F word” in the title stands for 40 and 50—ages when women are often overlooked and ignored, but it also stands for “fun” because the #FunNeverGetsOld.  “The Other F Word” aims to show that life doesn’t end after 30. It only gets richer with age.

You can watch all eight episodes, which are available now on Amazon: https://www.amazon.com/dp/B01LDXWSIO

I really enjoyed The Other F word too! It definitely reflected "women like us" which, as you point out, is rare in the entertainment world these days. I have great respect for Caytha, who is speaking up for all of us when she says we want to see women like us. Less airbrushing and more reality (and yes, wine....).

Yes, it was so refreshing to see moms of college kids and single women over 45. It's not just about moms!

Andrea Bates shares an infrequent recipe in the midst of her regular book reviews over at her website, Good Girl...