Editor’s note: In celebration of Grandparents’ Day on September 7, we’ve been running a series on grandparents and grandparenting. Enjoy this article from writer Risa Nye about her own grandmother.

My grandmother, a “my way or the highway” type, served soft-boiled eggs to her two young granddaughters. When my sister and I protested that we didn’t like runny eggs, she informed us, “This is the way I make them.”

Her piercing brown eyes could stop you in your tracks, and the way she clamped her lips together signaled her disapproval. At several inches under five feet tall, she nevertheless presented a powerful figure. Pursed lips, hands on aproned hips, those intense brown eyes.

Oh, I can still remember sitting at her table and staring down at those squishy yolks, trying not to gag and wanting to cry. When she got upset, which happened frequently, her voice quavered and she rubbed the thin, delicate layer of skin on the backs of her hands over and over again. 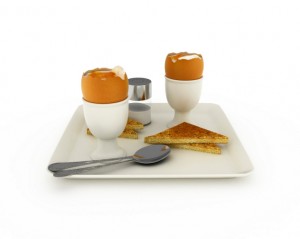 No one challenged her story, the same way no one challenged her version of how she arrived in America pregnant with my mother, even though the timeline she laid out would’ve added up to a pregnancy that lasted eleven months. Better to accept certain questionable explanations than to run the risk of the harsh stare from those eyes, and the look of disapproval she wore nearly all the time—along with the apron she put on over her housedress every day.

When my grandmother heard about my plans to marry the young man I had been dating for four and a half years, she expressed her feelings about my marrying someone of a different religion. Tactfully—for her, anyway—she finally conceded that “We’re all God’s children.” Not a ringing endorsement for my choice of a husband but as close to a positive reaction as we would get from her.

As grandmothers go, I believe I got short-changed. My husband loved his Nana—a warm, affectionate woman who delighted in spoiling her three grandchildren. I never met her, but I heard stories that demonstrated the high standard she set for doting, hugs, and unconditional love. My grandmother, on the other hand, didn’t seem cut out for the role. Although she always told us she loved us and sang “I Love You, A Bushel and a Peck” every time we saw her, it seemed somehow manipulative. Her hugs carried with them a sense of obligation. The “I love you” hung there uncomfortably until we mumbled “I love you too,” because we felt we had to.

Over the years, I tried to figure out why my grandmother seemed so bitter and emotionally distant. I discovered a few facts that may have had something to do with her perspective.  She had grown up in a relatively well-to-do family in Eastern Europe, but they lost everything “to the Cossacks.” She married an educated man who became a house painter in America when his credentials as a bookkeeper weren’t recognized here. I don’t know whether she had any dreams or aspirations for herself. She never talked about them.

There isn’t anyone left to ask anymore, so I’ll never know the true story. My mother, surprisingly loyal, never complained about being raised by a mother she couldn’t ever seem to please. I know she struggled with certain aspects of motherhood herself, unable to break the chain of behavior she’d grown up with.

I’m a grandmother now too, and I’ve spent a lot of time figuring out the kind of grandmother I want to be. Do I spoil my grandchildren? Maybe a little. But I like to have fun with them, I love to make them laugh, and we’ve created some happy memories already. They’re very young, and for now I’m someone they like to spend time with. If I’m still around when they grow up, I swear I will not go through their cupboards or comment on their housekeeping or pass judgment on their boyfriends or girlfriends.

And here’s another thing: They like their eggs scrambled, and that’s how I fix them.

Risa, your little came so alive for me in this piece! (So did your grandma). Love it.

Thanks, Carol. Love hearing from you here there and everywhere!

Great article. So meaningful. Interesting how kids just don't ask or argue with powerful adults about certain things, but still internalize them. I love the way you are using your experiences with your grandmother to understand where she's coming from and to learn for yourself how not to be. I had a great experience with my grandmothers, but sadly, my DH's mom has been challenging, which did traumatize me because it's hard to watch kids go through that...I vowed I would do things differently with my grandchildren. And I am.

Miriam, sometimes a bad example turns out to be the best example. Good for you for making different choices! Thanks for your comments.