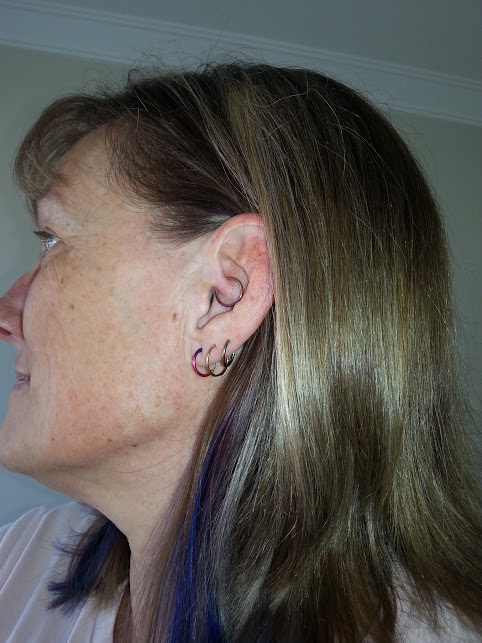 Leanne can be found on her blog, Cresting The Hill, sharing her discoveries about this time in her life. This story about how her chronic migraines have impacted her life – and her next step towards trying to stop them was originally shared there.

I have suffered from chronic headaches for a far back as I can remember. I’m not sure when they started but I know that I have been keeping the various headache remedy companies in business for at least a few decades now. I don’t think I have full-blown migraines, mine are more of the tension headache variety, but they have been relentless and I had reached the point of being willing to try something a little out of left field.

I had seen a few articles on daith piercing to relieve migraines, and being the world’s greatest sceptic, I had given them a bemused thought or two and moved on. It’s been a fairly recent practice – and has probably only come into the mainstream in the last couple of years. I left it on the back-burner, but it kept popping randomly into my head over next several months and I started reading a bit more on it. Apparently it is actually pronounced “doth” as in “moth” but I think 90% of us say “daith” because it’s easier. The piercing is supposed to correspond with a pressure point that acupuncturists use for migraine relief. Nobody will definitively say that the piercing “works” but most say to give it a go and see.

Giving It A Go

Eventually I decided that it was worth a shot – nothing to lose and I could take it out if it didn’t work. Next step was deciding where to get it done. We live in the country and apparently it’s a fairly complex piercing (not one you get at your local tattoo parlour) and I didn’t want to risk having someone mess it up. We were heading up to the city for a wedding so I did a bit of research and ended up finding a place near the wedding venue.

Our daughter was meeting us for coffee beforehand and she decided that it would be fun to do a mother/daughter piercing with the hope that it would help her headaches too. So we took ourselves off to have the deed done – me with a lot of research behind the decision and she with her usual “what the heck – just go for it” attitude (how I’d love to have that ability to jump in feet first and not over think things!)

It was all quite straightforward and not particularly painful – a bit fiddly and a bit of pressure but nothing to be bothered by. We then went off for our coffee date, then on to the wedding (with a bit of a sore ear) and back home again. I’d joined a Facebook group called The Daith Club – For Migraineurs and I followed their aftercare recommendations so I had a fairly uneventful healing process – although it’s still a bit sore (especially the entry and exit points) and apparently it can take up to 12 months to fully heal (the “joy” of a cartilage piercing).

The headache relief has been interesting. Our daughter says it has made no difference to hers at all, she gets hers primarily from clenching her teeth and the associated stress. I’d read that it doesn’t have much of an effect on that type of headache. As for me, I’ve noticed a significant improvement. I wouldn’t say it has cured me by any means, but I have gone from three or four savage headaches a week down to one mild one a week.

I used to take Nurofen with each headache – sometimes three or four times before it finally went away. Now I’m taking a couple of Panadol or nothing at all. Often a cup of coffee or a walk is all I need and before I notice it, the headache has faded into the background without a murmur. To not be taking six, eight or ten lots of Nurofen a week is amazing – I think my liver and kidneys will be thanking me for it!

I know there will be a lot of people who talk about the placebo effect and that the headaches going is just a coincidence, but I went into this with no belief at all that it would make any difference. I was resigned to the headaches and didn’t think something this “way out” would have the slightest impact on them. I am happy to have people pat me and tell me it’s all in my mind, I am ecstatic to be having fewer headaches and if it’s the placebo effect then I am content with that. I thought you had to be convinced for the placebo to work, but if it works regardless then that’s fine too.

When I’d posted a while ago about getting my daith pierced, a few people asked for an update, so here we are, three months down the track and one mild headache a week at the most – so no guarantees, but if I had my time over again, I’d have gotten it a lot sooner. As for our daughter, she’s happy to have a cool piercing – even if it didn’t fix her headaches!

Hi! I'm Leanne. I’m a happy empty nester living in Australia and blogging (at crestingthehill.com.au) about my midlife journey. I want to share the joys and challenges of this stage of life and counteract the negativity associated with getting older. There is so much to be grateful for and to look forward to, and I’m loving sharing my story with others who are walking the same path.

Hi Leanne, so good you found relief and it has lasted this long. I've never had much problems, but my daughter suffered migraines for years, before they finally seemed to go away on their own! Very interesting article!

Thanks Terri - I used to be so envious of people who never really got headaches - it's quite amazing to be one of them now - it may not last, but I'm happy to have had a break from the constant meds!

This is so interesting! I have heard of a few different piercings providing pain relief for different ailments...it is awesome to see that it worked for you!

what's even more awesome Jennifer is that I didn't expect it to work and it proved me wrong :)

Glad to see this is helping. Headaches are no fun!

that's why I gave it a shot Laura - anything to not be "the person who always has a headache"!

This is SO interesting. I am also a "what the heck lets try it" girl - so I am totally talking to my husband about this tonight (so he can help me find someone to do it). I am a sufferer of chronic migraines, some from teeth grinding, some from who knows what. But I am up for trying anything that even *could* potentially help!

I figured there was nothing to lose Renee - make sure you google APP piercers - they're supposed to be the best if you have one locally. And definitely join the Daith Club on Facebook (https://www.facebook.com/groups/857198007712593/) because they have some excellent advice. Let me know if it works for you x

I've heard a lot of good things about it. I use the Migraine Hat and it works so well. I even use it for hot flashes haha! I'm glad you found relief. Migraines are horrible.

Yes I've heard that the cold hats are good Rena - I also bought a "chillow" recently to keep my head cool when I'm sleeping - not sure whether it will do much, but it was cheap and I hate having a hot pillow.

Laure Oien can be found blogging regularly at A Square of Chocolate, where she shares delicious recipes, and writes to bring humor...