Because I am an Introvert…

It’s the Saturday night of BlogHer’14, and unlike 90% of the attendees, I am holed up in my hotel room, the events of the past 3 days finally having caught up with me in a big way. Not being much of a party girl I have opted to pass on the closing celebration.

I hear you all gasping.

How could I miss it? That’s just the way I am. My co-founder of Midlife Boulevard, Anne Parris, is most certainly dancing up a storm with the hundreds of women who will be there. It’s just the kind of thing she loves. And that’s why we work so well together – we are different in all the right ways. 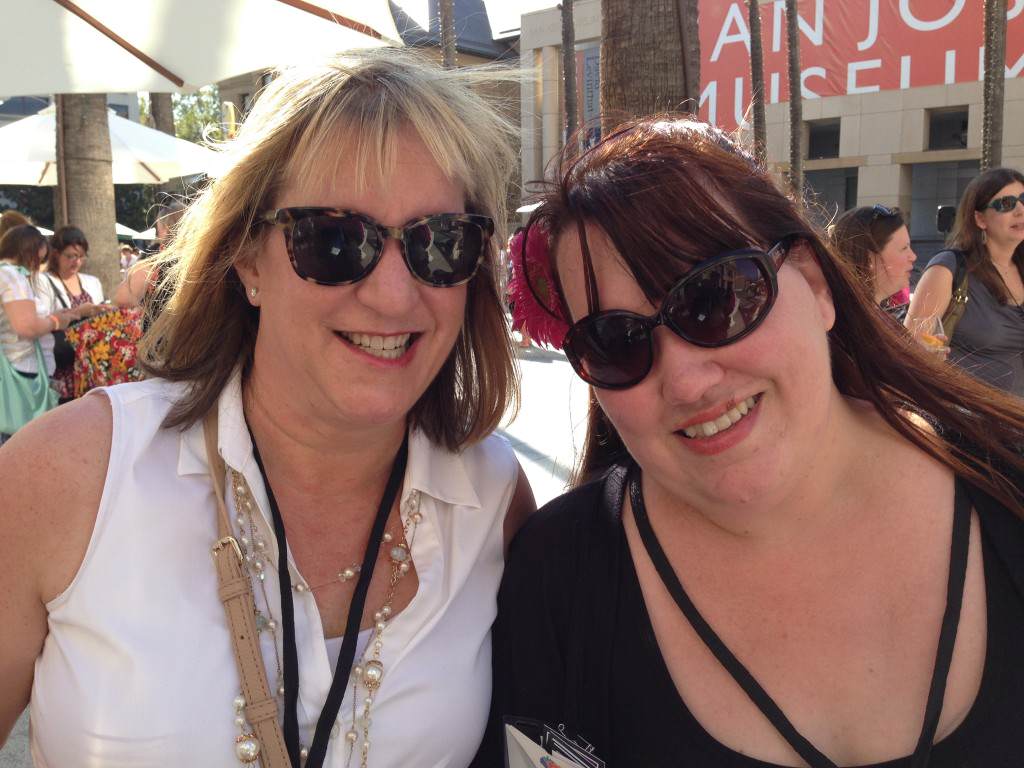 Anne and me at the Sangria Sundown Soiree #namastEPPA.

Thursday night found dozens of midlife women at the Fairmont San Jose Lobby bar, fanning themselves in an attempt to get cool and trying valiantly to talk over the music. It was not nearly enough time, but I did get to see, among others, Midlife Boulevard contributors Vikki Claflin, Elaine Ambrose, Adela Crandell Durkee, Suzanne Stavert, Kim Tackett, Nancy Fox of Skinny Kitchen and Kay Lynn Akers. 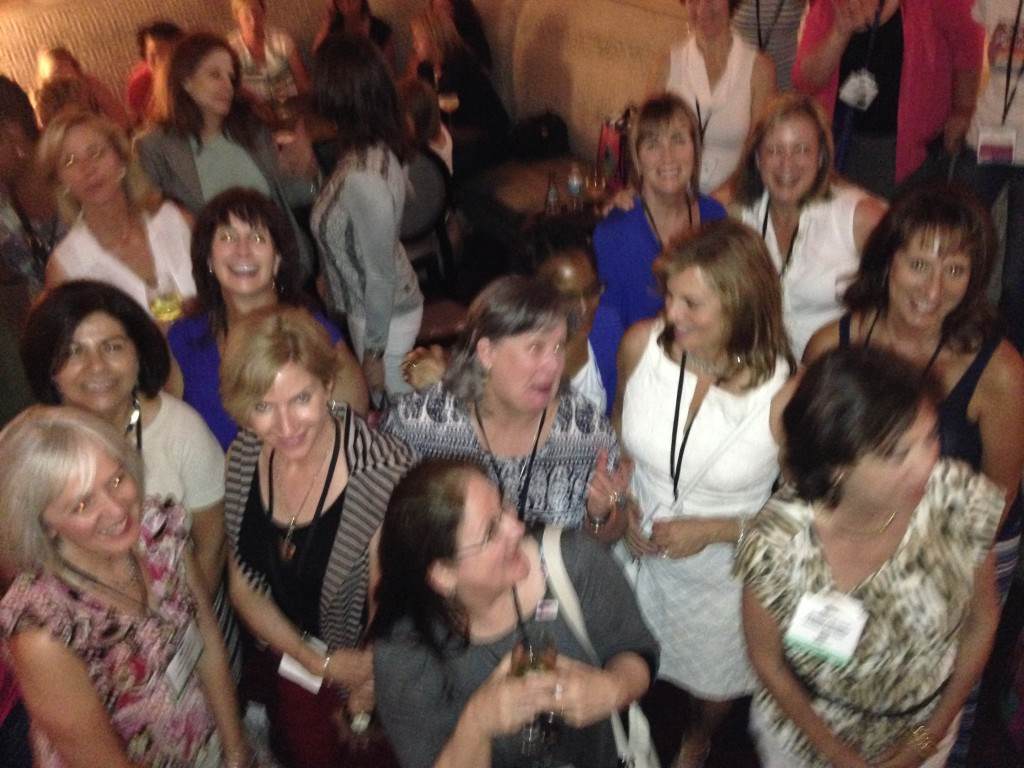 Just some of the Women of Midlife at BlogHer14

I was honored to be asked to be a Newbie Mentor for BlogHer’14. I started BlogHer’14 by attending the Newbie Breakfast, where I sat with women who, for the most part, were young enough to be my daughters. It didn’t matter, though – the one thing we all had in common is that we’re bloggers, and they had lots of questions that I was glad to answer.

I also was happy to have the chance to talk with Lisa Stone, one of the 3 founders of BlogHer and its CEO. Warm and friendly, I was also very impressed with her $59 dress from Nordstrom Rack. That’s what she told us. 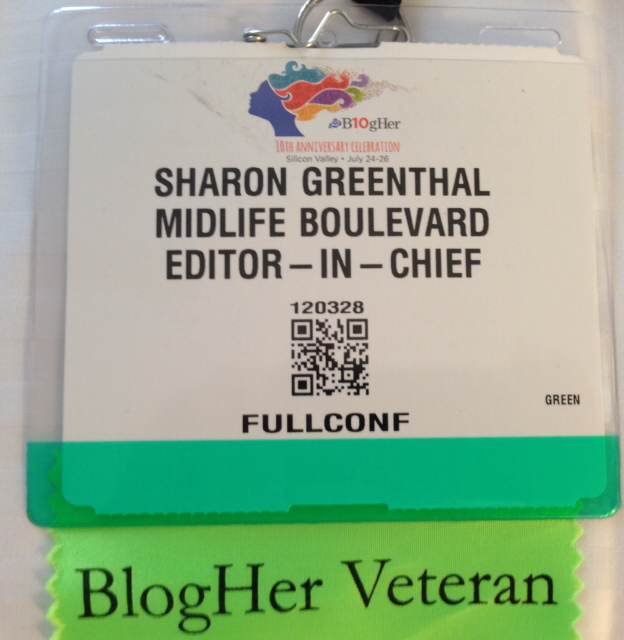 Friday morning at the opening breakfast I sat at a table with the coolest kids on social media, my IRL BFF Jodi Okun and the amazing, talented and dynamic Peg Fitzpatrick. Also at the table was Cliff Obrecht from Canva.com, my new favorite graphic design tool, and Matt Cherry, founder of iBlog Magazine, where all the best bloggers are interviewed. Anne and I are waiting to hear from you, Matt! 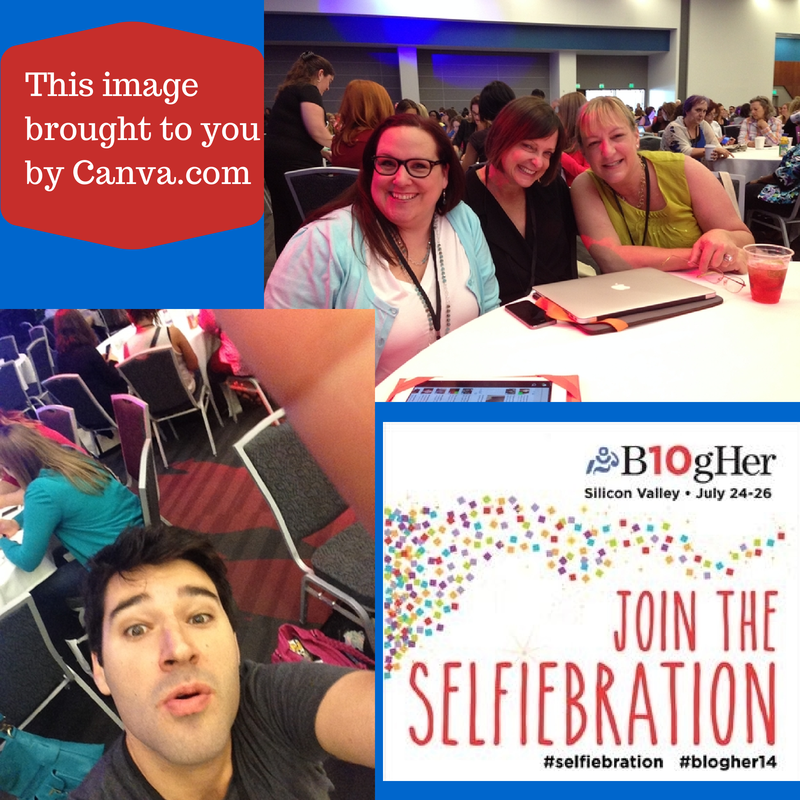 It’s All About the People

My primary goal for BlogHer this year was to connect with as many of the women from the Women of Midlife Facebook group, especially those I’d never met,  as I could, and to see friends. 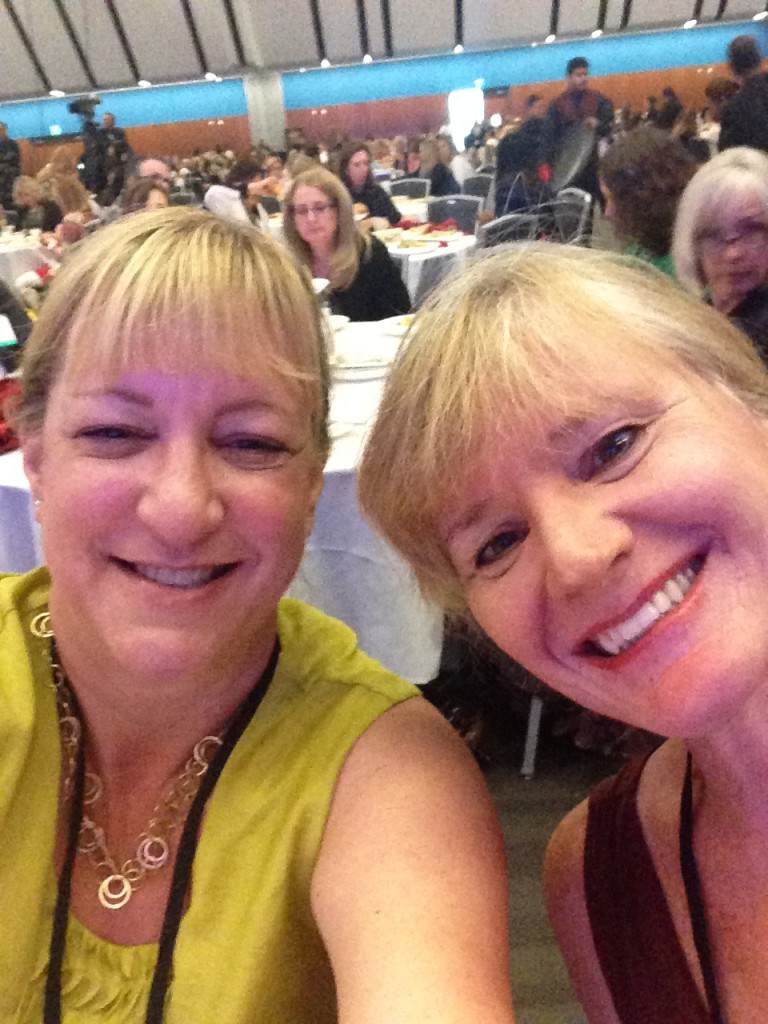 With the hilarious Alexandra Williams of funandfit.org

I had dinner on Wednesday night with Midlife Boulevard Mental Health Columnist Dr. Margaret Rutherford and contributor Treva Brandon, who blogs at The Late Blooming Bride. Two and a half hours after we sat down, barely knowing each other, we felt like we’d been friends for 100 years.

Thursday I had lunch with Judy Freedman, who blogs at A Boomer’s Life After 50. Yes, we talked a little about blogging, but mostly we talked about our lives, our kids, and traveling.

Thursday night I was so happy to be with Darryle Pollack and Lynn Forbes of WHOA Network for dinner. I look to them both not only for lively and interesting conversation, but for wise advice and brainstorming. I consider them not only business connections but good friends.

Friday night was a wonderful dinner with my dear friends Lisa Heffernan, Mary Dell Harrington and their photographer Theresa Kilman of the amazing blog Grown and Flown. Also with us at dinner were Anne and Jodi. We went to Santana Row, the place to be in San Jose, and ate at Lark Creek Blue. As always, dinner with Lisa, Mary Dell and Theresa is the highlight of BlogHer for me – since they live on the east coast and I live on the west coast, it’s one of the only times I get to see them during the year. 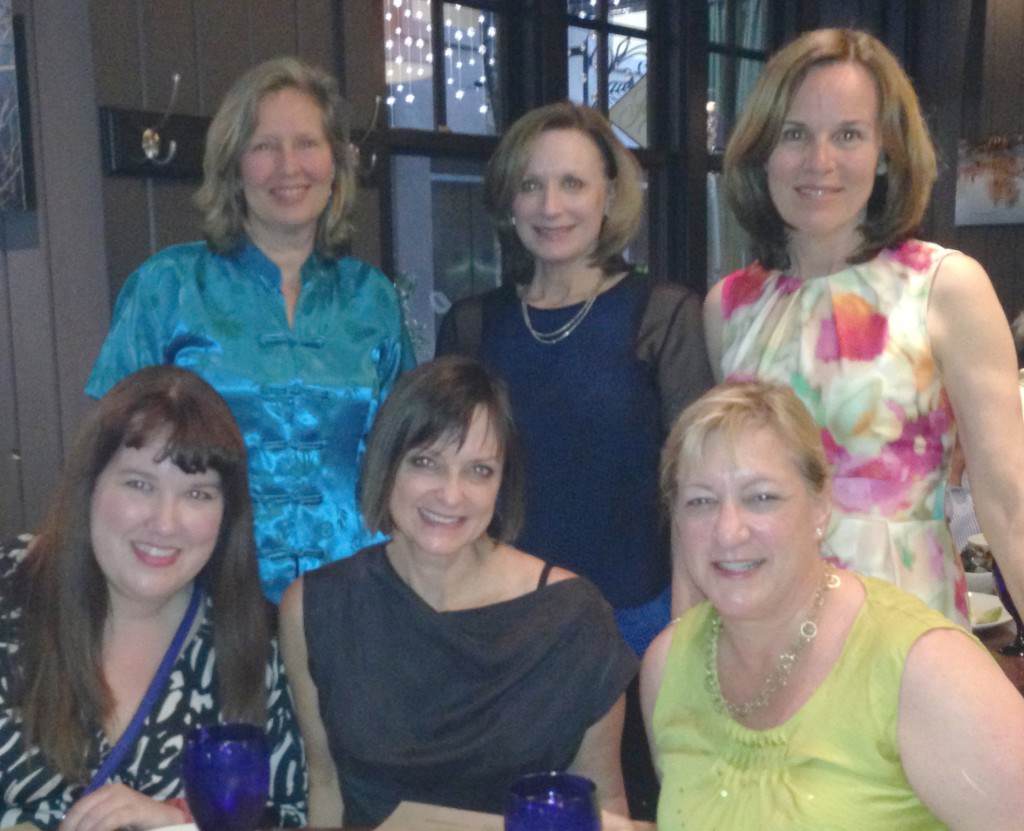 Saturday, though, was the best day. On Saturday, my daughter accompanied Kerry Washington, the star of the hit show Scandal, to BlogHer, where she was a keynote speaker. My daughter is on Kerry’s publicity team (she has the most awesome job). 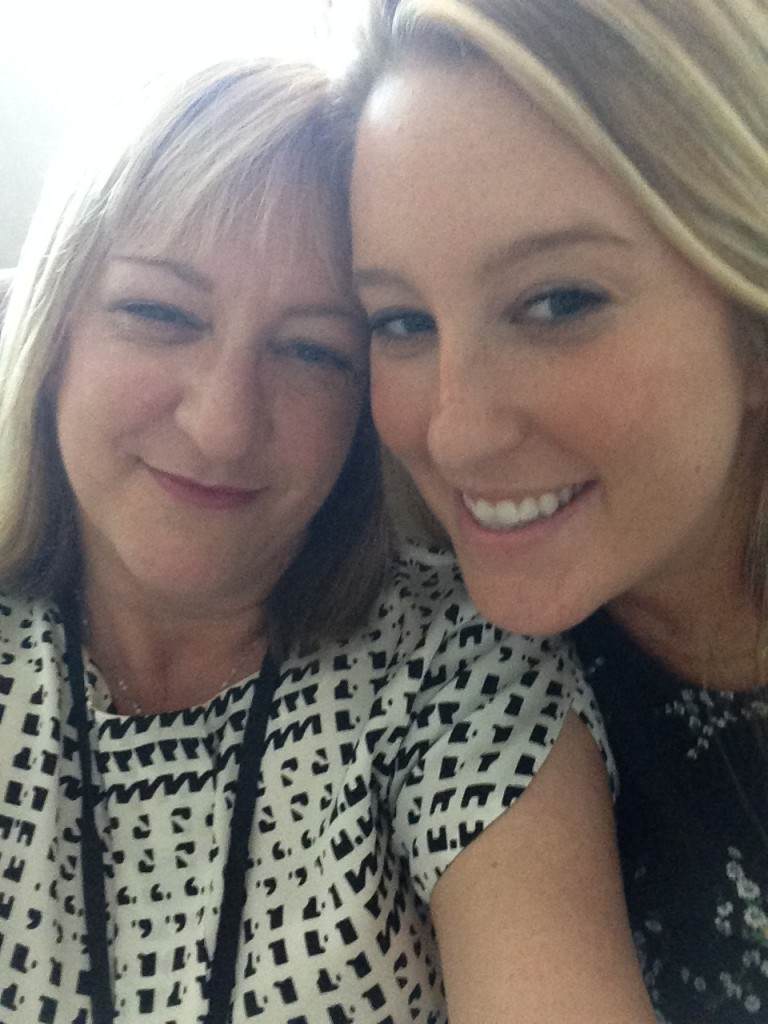 My daughter and me at BlogHer

To say that the coincidence of having my daughter at BlogHer while she was working was wonderfully surreal would be an understatement. I have always been proud of her, but watching her do her job with confidence and professionalism, interacting with the powers-that-be in the BlogHer community, was an experience I’ll never forget. My world and hers, colliding most excellently. 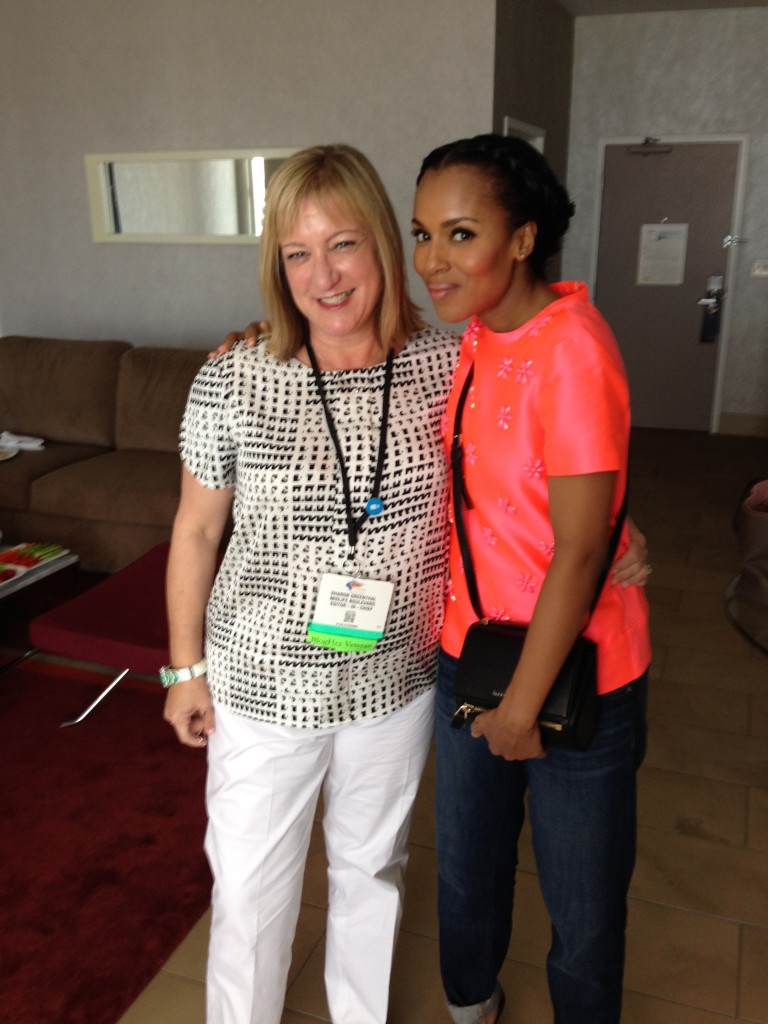 The lovely Kerry Washington and me.

As an added, extra-special bonus, I got to spend the morning with Kerry Washington and my daughter before Kerry did her kickass interview with the charming Demetria Lucas. I have to say, Kerry Washington is as lovely and delightful up close and personal as she was during her interview. And astoundingly beautiful, too. 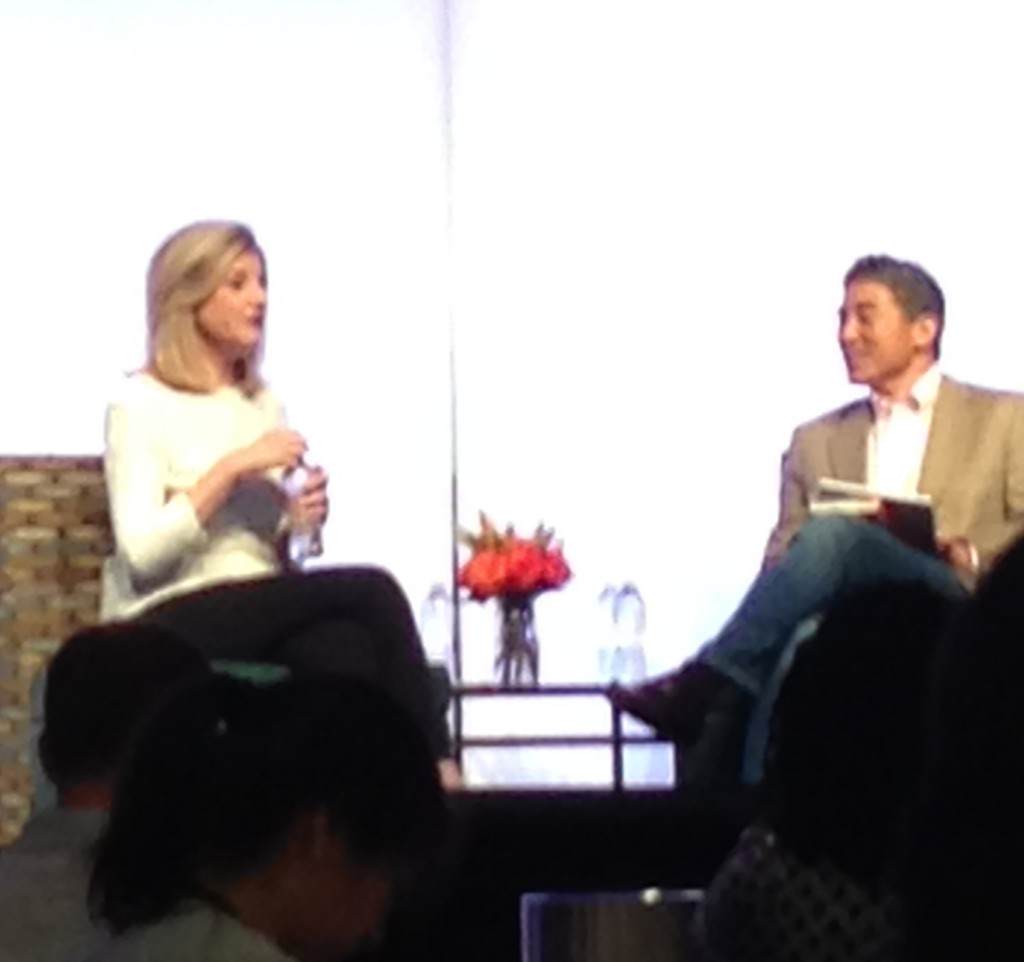 Finally, Saturday afternoon was the Boomer and Beyond minicon, led by Darryle Pollack, Cynthia Samuels and Patricia Patton. We discussed community, monetization, identity and so much more. There’s one thing that’s absolutely certain – the midlife community of bloggers is growing every day, and will continue to grow long after I’ve aged out of it. Whether at BlogHer or elsewhere, the women of midlife are finding our voices and sharing our stories on our blogs, in videos, on websites, and through social media.

Which brings me back here, to my hotel room, and this blog post. Another BlogHer, another year gone by. I am so grateful to be part of the BlogHer community.

Sounds like fun---I SOOOO wish I could have been there!!!

Having not been there, I thoroughly enjoyed your recap. Most fabulous is the part about your daughter. :-D

Saturday Night "Hotel Holer-Uppers" unite! I am glad to be amongst such fine company as I also decompressed alone in my Hilton room during the closing party. But I am sad that on Thurs night, I never made it to the midlife lobby meet-up in the Fairmont hotel because you all seem like such a great group and I was honored that an invite was extended to me. Would it be possible to join your Facebook group? At least that one, I don't have to stay up late for.... (Menopausal Insomnia kicks my butt some nights and the evenings it takes off, Exhaustion fills in for!) This was a perfectly splendid recap and I look forward to following your blog from here on in! Stephanie

Thank you for sharing your experience at Blogher, it looks like a wonderful event. I enjoyed reading about your experience... I'd most likely be like Anne, dancing up a storm at the closing gathering..

What Would You Do To Be “10% Happier?”: A Review of the Book by Dan Harris

10 years ago, Dan Harris had a panic attack on TV. He was reporting for "Good Morning America". If you were watching,...