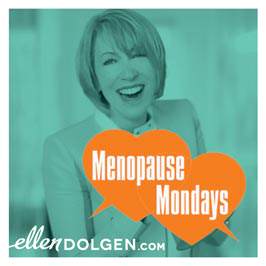 Ellen Dolgen has advice for you if you are experiencing abnormal uterine bleeding during perimenopause or menopause. Here’s what you need to know, and what you can plan on talking about with your doctor.

You know when your best girlfriend tells you that she’s gotta tell you something, or she’ll blow up like a balloon. Almost against your will, you find out that her neighbors like to do the funky chicken, naked, in the backyard, under a full moon.

Or you find out that the recipe you’ve been begging for is really a dish that you can buy in the market. Well, I’d like to talk to you about something too.

It’s not strange, like naked dancing neighbors, but it’s a topic that doesn’t get talked about enough.

When we have normal periods, the lining of the uterine cavity usually sloughs off every 28 days. In menopausal women, the lining usually thins out and no longer sloughs off.

You know how your mood can be all over the road when you have your period, well, during perimenopause (the 6-10 years before menopause) your period can really be moody. It can come and go when it wants; it can make a surprise visit or not show up at all. When you haven’t seen her for 12 consecutive months, congratulations! You’ve graduated to menopause. (No cap and gown required.)

Many women experience random bleeding during their perimenopausal and menopausal journey.Although menstrual irregularity is normal during perimenopause, unusual bleeding could be a sign of a problem. Unusual bleeding can be attributed to a variety of factors, including: thyroid problems, hormonal imbalance, thinning (atrophy) of the endometrial or vaginal tissues, uterine polyps, fibroids and cancer – just to name a few. Three of the most common causes, according to the American College of Obstetricians and Gynecologists (ACOG), are:

If you suddenly experience out-of-the-ordinary bleeding, it’s very important to be evaluated by your gynecologist/menopause specialist. Think of him/her as your coach to help you tackle your opponent.

So how can you tell if your bleeding is abnormal? According to ACOG, any bleeding after menopause is abnormal. During perimenopause and menopause, alert your doctor if you experience any of the following:

I’ve got abnormal bleeding – now what?

In addition to a physical examination, ultrasound and endometrial biopsy are two ways your doctor can examine endometrial bleeding. Here’s the possible team lineup from ACOG:

I featured my own experience with bleeding in Menopause Mondays: D&C – Hysteroscopy – Polypectomy. I also featured Molly’s story as I wanted to stress the importance of having ALL out-of-the-ordinary bleeding evaluated by your doctor.

I received my test results – what’s the game plan?

As you go through perimenopause and menopause, check off your symptoms in a menopause symptom chart. If you notice anything unusual: spotting, or a sudden heavy flow, or have a “strange feeling,” do yourself a favor, and check in with your doctor or menopause specialist. There’s nothing wrong with erring on the side of caution. What you’re experiencing could be a part of the whole perimenopause or menopause stage. If it is not, remember that early detection is the key to stopping any health problems before they become a royal pain in the uterus.